Carol Johnson, who transformed derelict sites into striking civic parks as the founder of what would become one of the country’s largest landscape architecture firms owned by a woman, died on Dec. 11 at her home in Boothbay Harbor, Me. She was 91.

A niece, Virginia Johnson, said the cause was complications of Alzheimer’s disease.

Ms. Johnson was known for her large-scale public projects, which often involved environmental remediation. For the Mystic River State Reservation, a nature preserve in Eastern Mass., a commission she received in the 1970s, she transformed a toxic landfill into a public park. The John F. Kennedy Park along the Charles River in Cambridge, Mass., had once been an oil-soaked storage site for train cars before Ms. Johnson’s firm took it on in the early 80s. (The park opened on May 17, 1987, on what would have been the president’s 70th birthday.)

At the Kennedy park’s center is a granite fountain with water spilling over its sides, a design inspired by New England streams, Ms. Johnson once said. For an energy company in New York State that was expanding, she directed the company to a larger, less visually-imposing site, and was then given the job of restoring the power plant’s original site to meadow land.

The John Marshall Park in Washington was in a neglected area originally planned for a parking lot. Ms. Johnson’s firm won a national competition to turn it into a terraced landscape in honor of the chief justice, who had lived in a boardinghouse nearby.

And at Expo 67, the 1967 World’s Fair in Montreal, she collaborated with Buckminster Fuller and others who created the United States Pavilion, an enormous geodesic dome bordered by trees. To find mature specimens, she barnstormed around rural Canada in a small plane, touching down when she saw ones she liked and buying them outright from farmers and landowners.

Ms. Johnson was known, too, for her work in public housing, notably three Boston area projects in the 1980s, and on college campuses, including Williams, Harvard, Bowdoin and Wellesley, her alma mater. 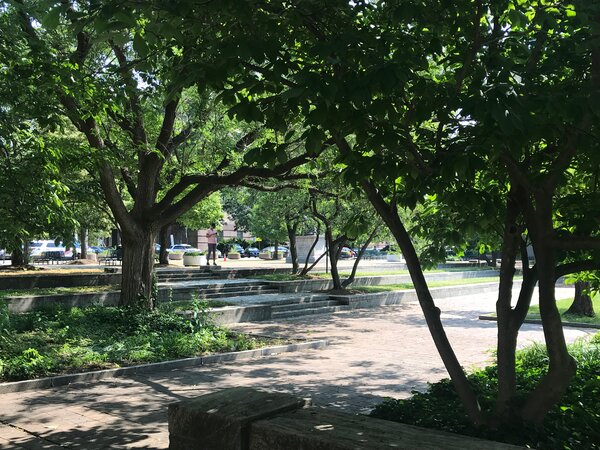 “Contextualism was the ruling principle behind much of Carol’s work,” Jennifer Jones, a principal at Ms. Johnson’s firm for over 30 years, said in a phone interview. By the 1990s, Carol R. Johnson & Associates had a staff of more than 100 and projects all over the world.

“She was respectful of the history of a place and the meaning of a place,” Ms. Jones said. “Many designs were about healing the land. When she was working on public housing, she listened to what the tenants wanted, not just the bureaucrats. While historically women landscape architects had worked primarily on residential and park projects in small offices, or as sole practitioners, she really pushed open the door for acceptance of a larger, woman-owned firm doing prestigious and complex projects in the public, institutional and corporate realm.”

Few women were practicing landscape architecture when Ms. Johnson opened her firm — with just a drafting table in her Cambridge apartment — in 1959. Most men at the time didn’t want to work for a woman, she recalled, so she ended up hiring sculptors. Bidding on one early job, the Cambridge Common, she had the thought to bring two male employees with her. When the ploy failed, and she lost out to another firm, as she recalled in an oral history by the Cultural Landscape Foundation, a member of the committee that had made the decision remarked, “We gave it to two good men instead of one good woman.”

Ms. Johnson once told Ms. Jones that she founded her firm so that people would stop yelling at her. (Architecture firms can be fractious.) Her own technique to command attention was to lower her voice: You had to lean in to hear her.

Carol Roxane Johnson was born on Sept. 6, 1929, in Elizabeth, N.J. Her mother, Edith Rosalie (Otto) Johnson, was an educator and later principal of a school. Her father, Harrison Brymer Johnson, was a lawyer with his own practice.

Carol grew up nearby in Union, N.J., and had an early career as a newspaper publisher of sorts. Her older brother, Clark, had started a neighborhood newsletter, The Boulevard Bugle (motto: “May the Bugle Never Play Taps”), for which she and his friends were reporters and deliverers. When Clark was in high school, Carol took it over, increasing its circulation to 400 from about 40 and eventually selling it to a local newspaper.

She earned a degree in English from Wellesley College in Massachusetts; as she often said, its campus was the first designed landscape she had ever lived in. (The campus was conceived, in part, by Frederick Law Olmsted, a designer of Central Park.)

After college, Ms Johnson biked through Europe with a friend, an unusual trip for a young woman in the early 1950s, soaking up not just celebrated landscapes like those at Versailles in France and Hampton Court in England but also fields in Ireland. She worked as a tour guide at a wax museum in Florida and then at New England Nurseries, a century-old business in Bedford, Mass. She lived in a shack on its grounds and met a number of landscape architecture students from Harvard there; they encouraged her to join their field.

Ms. Johnson earned her master’s in landscape architecture from the Harvard Graduate School of Design and taught there for nearly a decade. She received numerous awards, including the American Society of Landscape Architects’ gold medal, the first woman to do so. Her partner, John V. Werme, an engineer, died in 1993. She leaves no immediate survivors.

Ms. Johnson retired in 2016. Last year, her firm, which had merged with a Canadian company, changed its name to IBI Placemaking.

She was often asked what her favorite project was, and she often answered by describing Kennedy Park, her hometown project. But if pressed, as she told the Cultural Landscape Foundation, she would declare, “My favorite project is when something gets done.”