I have seen the return of Broadway, and its name is Bruce Springsteen.

In a city whose cultural soul had been shuttered for more than a year with boarded up windows and empty streets, it was Springsteen who called it back to life on Saturday night, his gruff and guttural rasp the first to echo across a Broadway stage to a paying audience in 471 days.

Of course, “Springsteen on Broadway” is no traditional Broadway production — no mesmerizing choreographed musical numbers, no enchanted sets, no multi-page bios of cast members in the Playbill. The show consists of a man alone onstage; his ensemble a microphone, a harmonica, a piano and six steel strings stretched across a select slab of spruce wood.

“I am here tonight to provide proof of life,” Springsteen called out early on. It was a line from the monologue of his original show — which ran for 236 performances, in 2017 and 2018 — and now it carried extra weight. That proof, he continued, was “to that ever elusive, never completely believable, particularly these days, us.”

For the “us” that packed inside the St. James Theater — 1,721 filled seats, very few masked people, all vaccinated — that first arpeggiated three-note chord from “Growin’ Up” was indeed proof that the rhythms that moved New York City were emerging from behind a heavy, dark and weighty curtain.

The 15 months that Broadway had been shuttered was its longest silence in history. In years past, strikes, hurricanes, blizzards and blackouts had managed to tamp down the lights on Broadway only for a few days, weeks or a month. But the pandemic forced the Theater District into an extensive darkness on March 12 of last year, as New York was quickly becoming the epicenter of the epidemic in the United States.

And while marquee shows like “Hadestown,” “Hamilton” and “Wicked” are still awaiting their September reopenings, it was Springsteen who took one of the most meaningful strolls to center stage in Broadway history, and sang. 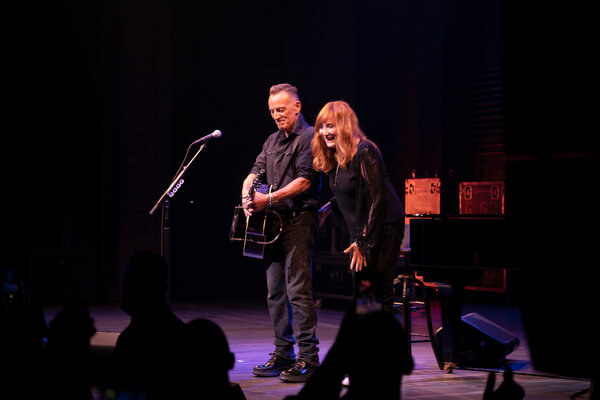 Though the show largely hewed to the original incarnation, there were some notable additions, and new phrases, soliloquies and tales woven into the performance. Springsteen mentioned his new record, “Letter to You”; his new film of the same name; and his dismissed drunken-driving charges. (He was arrested after taking two shots of tequila with fans in Sandy Hook, a public beach that does not allow alcohol, and then hopping on his motorcycle.)

But he also tried to make sense of the moment, of a long year filled with loss and isolation during the pandemic.

“It’s been a long time coming,” Springsteen said to the crowd after finishing the first song, stepping away from the microphone and speaking directly to the crowd. “In 71 years on the planet, I haven’t seen anything like this past year.”

He spoke at length of his mother, Adele Springsteen.

“She’s 10 years into Alzheimer’s,” he said. “She’s 95. But the need to dance, that need to dance is something that hasn’t left her. She can’t speak. She can’t stand. But when she sees me, there’s a smile.”

And he addressed the civil unrest throughout the country.

He then launched into one of three new songs to the show, “American Skin (41 Shots),” a ballad written about Amadou Diallo, a Guinean immigrant, who was fatally shot in 1999 by New York City police officers.

Amid the new material (including a new duet, “Fire,” with his wife, Patti Scialfa), the rhythms that marked the initial run of “Springsteen on Broadway” were quickly finding their groove. Hours before the show, a crowd amassed outside the side stage door, a relic of Springsteen’s earlier Broadway run when fans clamored for a glimpse of the rock star’s arrival every night.

“It’s just epic to have the Boss open us back up,” said Giancarlo DiMascio, 28, who drove down from Rochester to see the show (his 49th Springsteen concert). “It’s big for New York, its big for arts and culture here, and to have this open up is a sense of normalcy.”

A line began to form at the theater and eventually snaked down 44th Street, as fans clad in vintage Springsteen paraphernalia — old concert T-shirts, Stone Pony shirts and a few Springsteen face masks — were eager to get inside and see a stage in person for the first time in months. But, true to Broadway form, plenty of theatergoers staggered in just as the house lights were dimming, including Gov. Phil Murphy of New Jersey and Steven Van Zandt, the actor and guitarist for Springsteen’s E Street Band.

“I’ve been a Broadway fan for as long as I can remember, and this has been a challenging year,” said Jacob Persily, 26, from Monmouth County, N.J. He said he had been to “hundreds” of Broadway plays but had never seen Springsteen (though he lives around the corner from Springsteen’s gym in New Jersey). “I’m also a health care worker, so it’s been a challenging year in many other ways.”

Outside the theater, dozens of anti-vaccination protesters gathered, shouting and harassing attendees. A similar group had come to protest the Foo Fighters concert at Madison Square Garden last week. Both performances required proof of vaccination to attend.

But for many in the audience, it felt good to be back in the theater, back to live music, and just simply “back.” But other fans, for whom music — and particularly Springsteen’s music — brings an irreplaceable form of comfort, the show felt especially important.

Kathy Saleeba, 53, drove from Rhode Island for the show. A self-described “No. 1 Bruce fan,” Saleeba said she had seen 51 Springsteen shows, many with her childhood friend Jane.

In 2005, Jane was diagnosed with breast cancer, Saleeba said, but the two continued to go to as many Springsteen shows as possible, and they even met the Boss in Connecticut in 2008 before his show. He ended up playing a song for her, “Janey Don’t You Lose Heart.”

On Saturday, Saleeba brought a picture of Jane, who died in 2016, along with the lyrics printed out from “Land of Hope and Dreams.” She hoped to give it to Springsteen in person.

“Springsteen on Broadway” is part concert, part comedy, part tragedy, part therapy, but also so much more in an undefinable sum. It’s a performance and a conversation, with a hero and an icon baring himself onstage, offering a portrait of his life through his own eyes, his own voice, and how he has seen the world.

It’s a show that reckons so rawly with loss and change in an unfair world, and even Springsteen at one point choked up, tears winding down his face as he recalled all those he’s lost: his father, his bandmates, his friends.

“I’m glad to be doing this show again this summer because I get to visit with my dad every night that I’m here, and it’s a lovely thing,” he said, wiping his eyes.

Though through somber resilience, Springsteen also finds ways to celebrate.

In paying tribute to Clarence “Big Man” Clemons, the larger-than-life saxophone player from the E Street Band who died 10 years ago this month, Springsteen recalled when “Scooter and the Big Man” took the city on and whispered rock ’n’ roll stories into the ears of millions.

“He was elemental in my life,” Springsteen said, softly vamping through the chords of “Tenth Avenue Freeze-Out.” “And losing him was like losing the rain.”

Like so many in the audience, I too lost a “Big Man” in the pandemic. My cousin Big Nick, who had a heart so big it could have been the inspiration for Springsteen’s “Hungry Heart,” was one of the more than 600,000 American people who succumbed to the coronavirus.

And so has this city grappled with extraordinary loss, where almost every street, block and building, every inhabitant and every visitor has been forever changed by the pandemic.

As I, and so many others, shared the pain of Springsteen as he recounted the death of his friend, and promised to “see ya in the next life, Big Man,” there was also comfort in seeing him onstage again, on Broadway again, and all of us, strangers and not, together again in music.

And when Springsteen belted out the climactic third verse to “Tenth Avenue Freeze-Out” — “Well the change was made uptown and the Big Man joined the band” — the only audible sounds were cheers.