Boyega says he was ‘pushed to the side’ by Disney

Actor John Boyega has said non-white characters were “pushed to the side” by Disney in the last Star Wars film.

The Londoner played Finn in the latest trilogy, which concluded last year.

But he said the film-makers didn’t know what to do with his and other diverse characters in The Rise of Skywalker.

“What I would say to Disney is do not bring out a black character, market them to be much more important in the franchise than they are and then have them pushed to the side,” he told GQ. 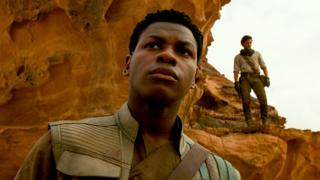 What else did he say?

Boyega, who In Star Wars Episodes VII, VIII and IX, played a runaway Stormtrooper at Rey’s side as a member of the resistance, acknowledged an actor is “not necessarily going to like everything” in a film. He said Star Wars was an “amazing opportunity” and a “stepping stone”.

But he vented his displeasure about the storylines in The Rise of Skywalker.

Ridley’s character Rey and Driver, as Kylo Ren, were at the heart of the plot about the fate of the Jedi and the Skywalker dynasty.

But the film-makers didn’t know what do to with Finn or Kelly Marie Tran’s character Rose, Boyega said. He also suggested Naomi Ackie, the black British actress who played Jannah, and Guatemalan-born Oscar Isaac, who played Poe, were similarly marginalised.

“What do you want me to say?” Boyega continued. “What they want you to say is, ‘I enjoyed being a part of it. It was a great experience…’

He also spoke about hair stylists who had no experience of working with hair like his but “still had the guts to pretend”.

How has Hollywood responded?

Disney has not responded, and nor has director JJ Abrams. But Boyega defended Abrams, who took up the director’s chair after Colin Trevorrow departed in 2017, saying: “Everybody needs to leave my boy alone.”

There’s been no response from any of the main figures in the Star Wars universe – or many others in Hollywood.

Those praising Boyega included Rachel Zegler, who will play Maria in Steven Spielberg’s new West Side Story; The Good Place star Jameela Jamil; Matthew A Cherry, who won an Oscar for a short film this year; and British actor Paterson Joseph.

What he’s doing is so brave and selfless. He’s so inspiring. @JohnBoyega is 👑

That was the bravest interview I’ve seen in a very long time. I hope that King prospers in all things.

Justice League actor Ray Fisher responded to a fan who asked to hear him and Boyega in conversation.

Fisher has previously alleged a “toxic and abusive work environment” on Justice League, which Warner Bros is reportedly currently investigating.

Perhaps after we lay this investigation to rest…🤔

I know one thing though, Hollywood would never be the same. @JohnBoyega

Boyega also received widespread support from fans and commentators on social media, although others had less sympathy.

John Boyega was a nobody until Disney gave him a lead role in the greatest movie franchise ever. But this is what the woke cult does to you. Instead of becoming the next Harrison Ford he’s just a bitter man who’s never content. Sad, but a prison of his own making. https://t.co/6ArOxCipDk

Ya I read the article. That’s why I tweeted u. It’s show business.
Things don’t always work out the way YOU plan.Happens to ALL of Us. Again be grateful for all u done so far which is a lot more than TONS of great actors of all races who also had roles cut down & will continue to