Billie Piper: Trying to have it all is ‘stressful’

Billie Piper has said young women can find being told they can have it all “very stressful”, as she makes her directorial debut with a drama looking at the conflicting home/work life pressures facing women.

Piper, the star of TV shows including Doctor Who and Penny Dreadful, is at this year’s Venice Film Festival to showcase her black comedy Rare Beasts.

She also plays the lead role of Mandy, a woman trying to raise her son and navigate life as part of what Piper describes as “that generation horribly sandwiched between traditional unions and modern romance”. Her co-stars are Lily James and David Thewlis.

“When I reached my 30s, I was told I could have it all, but many of the women around me were finding life really hard,” Piper, a mother of three, told BBC News.

“I was interested in pulling that idea apart a bit more and write about it, and it became Rare Beasts. 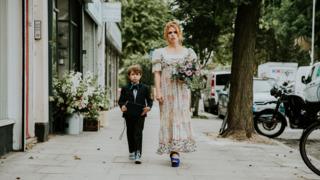 “I think women want to be recognised and have equal opportunities and that can be hard as a mother.

“The world is pointing us towards becoming the ultimate soloist, because there’s a lot you can do on your own as a woman now, you can earn money, work, enjoy yourself, and that’s amazing, but it’s challenging too.

“It’s hard being alone in the world, but the world seems to be pushing us towards that.”

The actress adds in her director’s statement about the film that she’s “surrounded by casualties, not successes. And I’m one of them”.

The actress has a baby daughter Tallulah and two sons with her ex-husband actor Lawrence Fox.

Piper says she first started writing the script for Rare Beasts about seven years ago and it was the current push for gender equality within the film industry that helped her secure funding.

“I would never have got this film made even two years ago,” she says. “It’s a dramatic shift and it’s turning around so much. I just wish it would extend to every industry and every household.”

Piper joins another former Doctor Who actress, Karen Gillan, in turning to writing and creating her own material. Gillan recently made the movie The Party’s Just Beginning.

“There’s great parts for women in TV and theatre,” says Piper, “but less so in film, it still feels like the stories can be male-led.

“I definitely felt a while ago that I wasn’t seeing enough juicy roles for women and I clung to the ones I felt might be interesting.

“So that’s powered my quest to make this film.”

The hardest thing, she admits, “was telling people what I wanted”.

“As an actor, you’re always being told what to do – telling other people felt very uncomfortable.

“But in the end you have to crack on, you have five weeks of filming and that’s it.

“It was also a bit stressful as I was six months pregnant at the time of filming. I don’t think I’d act again in something I was making, but I knew exactly how to play Mandy, she’d been with me for so long.”

“I can’t even describe this as a dream come true, it’s a very recent dream comes true.

“I’m overwhelmed by the reception, I definitely want to direct again as soon as I can.”

As well as moving into directing, Piper is involved in scriptwriting. Next year she’ll star in the Sky original drama I Hate Suzie, which she co-created with the writer Lucy Prebble.

The eight-part series is described as a “bold, bracing, funny drama” about Suzie Pickles (Piper), a star on the wane, who has her life upended when her phone is hacked and a photo of her emerges in an extremely compromising position.