Ben Affleck and Jennifer Lopez walked down the aisle for the second time, but not everyone is celebrating their nuptials because their choice of venues is raising a lot of questions. The groom’s Riceboro, Georgia estate has been labeled architecturally as an “imitation” plantation, but the property may have a much darker past.

Before the wedding, the headlines were touting the place as a gorgeous 87-acre, plantation-style residence that was built in 2000 to harken back to that era. That description alone is problematic enough — why would you want your property to resemble a slave owner’s home in the modern era (especially as a white male)? However, the land itself reportedly has a slave history, according to the Daily Mail. “The property was originally home to a ‘thriving’ rice plantation known as Hampton Pastures and was owned by Roswell King,” the outlet wrote. “The plantation was worked by slaves and Creek Indians, and the property dates back to before the Civil War.” They also detail that there’s an “unmarked slave graveyard is located somewhere on the property.” Can you imagine dancing the night away when there is such tragedy and trauma nearby?

If Daily Mail is able to obtain this information, wouldn’t Affleck have done his research before plunking down $7.1 million to buy the home 19 years ago? Even if he didn’t, he has tried to sell the property several times over the years, especially after he discovered that he was related to Benjamin Cole, a slave-owning Georgia sheriff, on PBS’ Finding Your Roots. Of course, many fans don’t know this background detail because he successfully lobbied show producers to edit out that information (yes, you read that correctly).

'Slavery and Freedom in Savannah'

He’s being criticized by people on Twitter, and by Leslie M. Harris, co-editor of Slavery and Freedom in Savannah, who slammed him for even thinking the Georgia estate was an appropriate place to hold his wedding (no matter how sentimental it reportedly was to the couple). “It’s clear he didn’t learn his lesson. We’re back at the same place with him,” she told Page Six. “People still build houses that are plantation style. It’s a sign of wealth. It’s surprising that Affleck would choose this place for his wedding when many (historic) plantations have stopped even having weddings.”

Affleck and Lopez aren’t the only Hollywood couple to find themselves mired in such a controversy. Blake Lively and Ryan Reynolds’ 2012 wedding was held at a former plantation and enslavement site called Boone Hall. Reynolds called their choice “impossible to reconcile” as well as “a giant f**king mistake.” They have since apologized and went on to donate they donated $200,000 to the NAACP Legal Defense Fund in 2020. 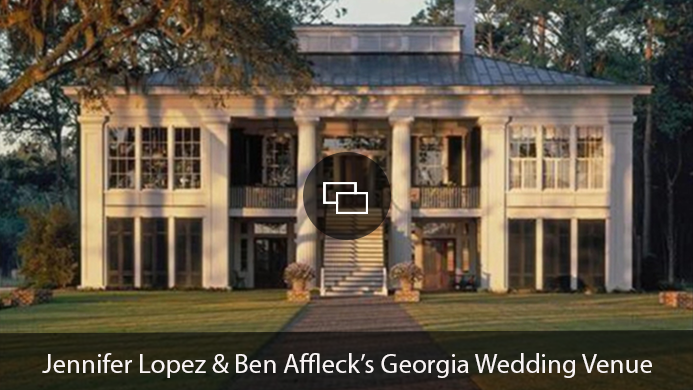