Back in the Girdle Again: Getting Fitted After a Year Untouched 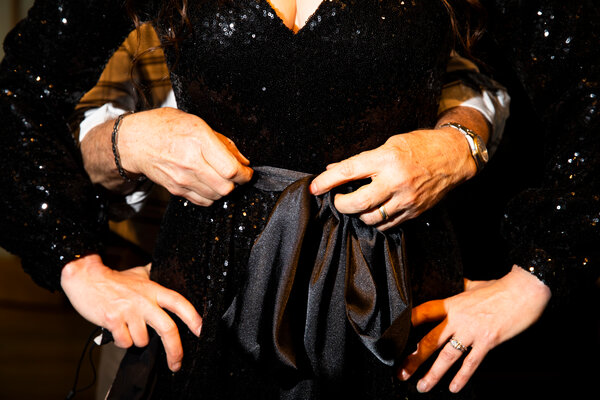 Here I am, back at the confessional at last. Forgive me, father, for I have sinned. It has been 13 months since my last visit to you. The father-confessor, to whom I am looking for absolution, is Eric Winterling, one of the great Broadway costume makers, and my confession is that (whisper it!) the pandemic had been unkind to my arms. To be specific, my upper arm in the rear, with a strange new pocket of femininity developing just to the interior of my elbow, on both sides.

I had to confess this news because that is what actors do when we are in a costume fitting. For a show, we want to make an impression, and that means we have to deal with our bodies, and we need someone to whom we can tell the truth.

A lovely fitter named Rita zips me into a dress and adjusts my undergarments. The pandemic has been filled with women writing about their bra drawers and what they don’t need; a woman actor has an additional secret drawer filled with Spanx and other strange, confining underwear, some almost medical, with fiercely strong zippers.

That morning I had ransacked mine for the first time in forever. “Back in the girdle again,” I hummed to myself. I turned to Rita as I struggled into one, and said I hoped her day was going well. She said simply, “You are the first actor I have seen in a year.”

Eric slipped into the room, turned me to the mirror and laid his hands on my hips — the first time that had happened in a long time, too. We stared at me in three-sided reflection, and I asked, meekly, if I was now a singer who required sleeves.

His task was to find, or create, a dress in which I could sing an evening of film noir-inspired songs — many, dauntingly, in French — to a limited in-person audience on May 6 for the French Institute Alliance Francaise. It will be the first time I have sung in front of living people since March 2020. Four cameras will be present, for those watching virtually, making it a concert in the round, so to speak.

The dress needed to say femme fatale — betrayal! cruelty! jazz! — while, of course, covering my arms. No stranger to creating costumes for ripening actresses, Eric projected confidence that the vintage improves in a tightfitting bottle. I tried to trust him.

Intimacy, humor and humiliation hung in the air as we quickly tested a series of sleek Donna Karan gowns he had assembled, all of which were wrong on me in various, dreadful ways. Then he spoke decisively. “It would just be easier if I made you a whole new dress,” he said, adding benevolently, “Angela Bassett ruined everything with her toned arms.”

Of all the intimacies of an actor’s life, none is as intimate as that with the costume fitter; he is your confessor and also, sometimes, your co-conspirator.

As a child growing up in a suburb of Philadelphia, Eric spoke sewing the way a violin prodigy speaks music. He watched his mother and used his paper route money at age 9 to buy dress patterns.

“I have three brothers — they were very athletic,” he tells me. “One day, I realized that in the back of the pattern books in the fabric stores, they had stuffed animal patterns and Barbie dress patterns. And that was it. I was off to the races.” His first triumph was an orange gingham stuffed dog that he made from a store-bought Simplicity pattern.

Eric studied costume design at Temple University, and after three years working as resident costumer of the Houston Grand Opera, he moved to New York in 1987, taking a job at Terilynn Costumes. When they closed, Eric decided to start his own costume-making business, though he was only 29.

“I’m rarely the designer, as a matter of fact,” he explains. “I decided a long time ago that I’m much better at interpreting designer sketches than designing myself. And so, I thought that what I could do sewing was much more useful for the world.”

Eric’s light-filled Flatiron district fitting room has French doors that open out to 8,200 square feet of industrial space, with 38 sewing machines and 18 cutting tables, while hundreds of yards of rolled fabric lie on shelves like sacred scrolls. If he is my confessor and the studio his cathedral, the fitting room is the mirrored apse where the very essence of his craft takes place.

“The dress is made in the fitting room,” Eric tells me, quoting the designer Jane Greenwood, with whom he has often worked, and whom I first met when she designed (and he made) the costumes for the Broadway musical “High Society.” (Just over my shoulder, on the back wall, hangs a framed, and fading, sketch of me as Tracy Lord in my — her! — wedding gown.)

The fitting room itself has to be just so: “This room is 400 square feet, and not just a corner of the room with a curtain on it. You have to really have people be comfortable in it.” Eric long ago installed stage lighting on the ceiling.

And he understands that a costume fitting is a psychic encounter as much as a physical one. “You have to listen to people,” he says. “What the person who’s wearing the costume sees with her eyes, you have to make the match through the process of a fitting. You have to switch each other’s glasses to just see what they’re seeing.”

Before the pandemic, as many as 15 shows were being worked on at once in Eric’s shop. His atelier created Elphaba’s witchy dress for “Wicked” (designed by Susan Hilferty) and the blue velvet harem ensemble for the Genie in “Aladdin” (designed by Gregg Barnes). He solved the challenge of the breakaway costume for Elsa as she belts “Let It Go” in “Frozen.”

Nearly 50 full-time employees were working in Eric’s studio, hailing from the Dominican Republic, Pakistan, Thailand, Japan, the Czech Republic and Russia, among other places. Now, though, he is working with only a third of his usual team.

He’s been active with the new Costume Industry Coalition, which raises awareness of how hard hit this sector has been. Last summer, he struggled even to keep his shop open.

“I spent a lot of time last May, June, driving things around to people’s homes, like this ice dress,” he says of a beaded number, intended for a Tokyo production of “Frozen.” “It had to be hand-painted over here, and then it had to go over there to be beaded, then it had to go to New Jersey to be made.”

His staff was working and sewing from home, and he lent his studio to organizations making P.P.E.; instead of magical dresses, they made protective gowns. And television work, including HBO’s “The Gilded Age,” replaced the theater.

I sensed that one reason Eric was pleased to make me a dress was because he saw it as an offering to the Gods of the Balcony: If I go on making dresses, the singing will come back.

At my second fitting a week later, a black sequined gown was placed on my body. I stepped into it, and Rita guided my voluptuous elbows into two tunnels of sparkling masquerade. Sleeves!

She zipped me into a near-finished, brand-new dress and sat on the floor to stare at the hemline while Eric came in to get a look. The look was bosomy without being modern, the neckline inspired by Jane Greer’s in the 1947 noir film “Out of the Past.” While describing a Parisian bead-and-sequin shop he loves called Fried Frères, Eric tended to my arms and pinched the fabric, experimenting with taking it in, or shortening the sleeves.

After 14 months of Lululemons and T-shirts, I had a real costume on my body. It felt wonderful to be in a slinky, sinuous gown with a flirtatious satin sash. I felt like a candy box.

I’m no stranger to doing cabaret jobs in rented gowns — there is an app for slightly-used dresses for gently-worn actresses — so this feeling was precious. Eric and I looked at each other. The costumer-confessor and actress-penitent were in a state of hope. He, because sewing is what he does; she, because despite all the agonies, singing is what she does. That’s the irony of the actor’s life: The costume frees us from the insecurities that the need for a costume creates. It’s the actor’s version of infinity — a new look, a new role, a new possibility.

More practically, I suggested he could tighten the waist.

“There is no need,” he reminded me. “You have to sing. You have a lot to do in this dress. It’s fine as it is.” I wiggled my hips, with a few bars of “Put the Blame on Mame.” Eric let out an audible sigh. He moved to the back of the room and turned off the lights. Then he flipped the switch, and the ceiling’s stage lights burst into a warm glow.

“There’s the magic,” he said. I was dressed.

Melissa Errico is an actress and singer. “Mystery,” her new concert, is Thursday at 7 p.m. at Florence Gould Hall in Manhattan; stream at fiaf.org.