Anthony Chisholm, an actor who was among the foremost interpreters of August Wilson, appearing in dozens of productions of that playwright’s works, both on Broadway and in leading regional theaters, died on Friday at his home in Montclair, N.J. He was 77.

Jeremy Katz of his talent agency, the Katz Company, announced the death. The cause was not specified.

Mr. Chisholm, in a career that stretched across a half-century, was known to television audiences from his recurring role as the inmate Burr Redding in the final three seasons of the HBO prison drama “Oz,” which ended in 2003. But most of his work was on the stage, and he drew particular acclaim for his appearances in the plays that constitute Mr. Wilson’s Pittsburgh Cycle, 10 works chronicling the African-American experience during the 20th century.

“The enjoyably raspy Mr. Chisholm is an old hand at playing a now classic Wilson archetype,” Ben Brantley wrote in The New York Times when Mr. Chisholm played Barlow in the play’s premiere at Yale Repertory Theater in 2005, “the crazy-like-a-soothsayer street person.”

A favorite Wilson role was Fielding, an alcoholic cabdriver in “Jitney,” which Mr. Chisholm played in a number of productions, culminating in his final Broadway credit. The play was first performed in 1982, but in the mid-1990s Mr. Wilson revisited it, beefing up the Fielding role, inspired in part by Mr. Chisholm.

The two had become good friends while working on “Two Trains Running,” thanks to a shared habit.

“You’d get a five-minute break during every hour of rehearsal,” Mr. Chisholm told The Times in 2017, “and the smokers would run out each time. I was smoking two packs a day, and August was smoking five packs a day. And so we started a connection away from the play.”

Among other things, Mr. Chisholm told Mr. Wilson about his family, and in the revised “Jitney,” Fielding had a deeper back story about once having been a tailor. Mr. Chisholm knew it quite well.

“When August wrote the play, that whole aspect about him once being a tailor wasn’t in there,” he told Newsday in 2000, when he was playing the role Off Broadway. “ We got into a conversation about families, and I told him about my father, who was a red cap on the railroad but had great tailoring skills and started making clothes for traveling band members. August said, ‘I like that; can I use it?’ One day he handed me a wonderful, brand-new scene, and I was so happy; it rounded out my character. Fielding wasn’t just an alcoholic; he’d had a whole ’nother life.”

As for how he rendered the Fielding character so compellingly, Mr. Chisholm confided that the secret was in the bottle Fielding nips from during the play.

“Granules of instant coffee with a slash of soy sauce mixed with water and a heaping teaspoon of cayenne,” he explained to Newsday. “When I drink it, the pepper burns my throat and chest like alcohol would and opens up my emotional center.” 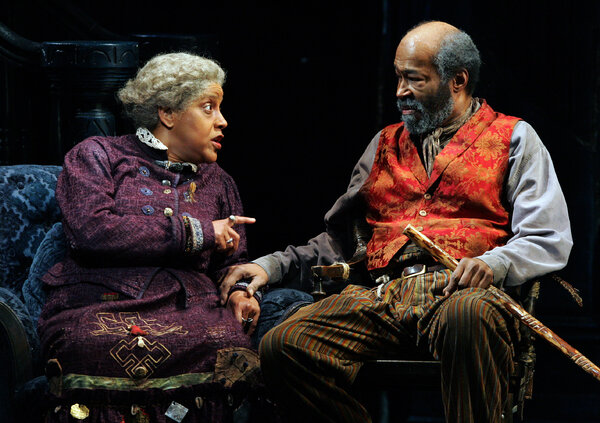 Anthony Victor Chisholm was born on April 9, 1943, in Cleveland. His father, Victor, was a tailor, and his mother, Edith (Amilia) Chisholm, was a homemaker and gift wrapper who, he told The Star-Ledger newspaper in 2007, used to make him memorize and recite poetry.

Mr. Chisholm grew up in Cleveland and was drafted into the Army in 1964, serving as a platoon leader in Vietnam. Leaving the service several years later, he returned to Cleveland. His description of his entry into the acting life made it seem effortless.

“After I was discharged from Vietnam,” he told Newsday, “I got a role in a musical, ‘The Boys From Syracuse,’ and then a small part in the movie ‘Uptight,’ where I met a lot of actors. I packed my car and moved to New York. I’ve been working ever since.”

He had studied architecture for a year at what is now Case Western Reserve University in Cleveland, but what helped propel his acting career was enrolling in a master class under the director Lloyd Richards at the Negro Ensemble Company in New York in 1968.

In the 1980s, he drew upon his war experience for roles in several productions by the Vietnam Veterans Ensemble Theater Company, including a well-received staging of the collaborative work “Tracers,” which played at the Public Theater in Manhattan in 1985 and toured internationally.

In the 2017 interview with The Times, Mr. Chisholm recalled his first encounter with a Wilson play.

“I saw ‘Fences’ and connected with it pretty quickly because I grew up in Cleveland, which is not far from Pittsburgh,” he said. “His old-timers talk pretty much the same as guys I’d grown up around.”

He first met Mr. Wilson when he auditioned for “Two Trains Running” in 1990. He didn’t get the part, of Wolf, a numbers runner, for the world premiere that year at Yale Repertory Company (Samuel L. Jackson did), but when the production moved on to Boston and the West Coast, Mr. Chisholm was called in to take over the role. In 1992, with Mr. Richards directing, it became his Broadway debut.

Mr. Chisholm’s marriage to Valerie Moore in 1972 ended in divorce, as did his marriage in 1979 to Gloria Nixon. He is survived by a daughter from his first marriage, Che Chisholm; a son from his second marriage, Anthony Alexander Chisholm; and two grandchildren.

Mr. Chisholm knew that with the explosion of cable television offerings, there were more opportunities for Black actors on TV than on the stage. In a 2000 interview with The Times, he lamented that reality.

“We as actors want to act,” he said. “But first of all, I’m an African-American. And putting all politics aside, what we need is more producers, more writers and, as a people, more cohesiveness. We as Black people have got to support the theater.”