‘All Creatures Great and Small’ Rehabilitates Cows and Soothes Souls

A young veterinary surgeon begins to practice in the remote Yorkshire Dales in 1937, treating abscesses in horses’ hooves and milk fever in cows and prescribing diets for overfed lap dogs.

It hardly sounds like the stuff of bestsellerdom. But James Herriot’s first book, “All Creatures Great and Small” (first published in Britain in 1970 under the title “If Only They Could Talk”), and the seven books that followed, became enormous hits worldwide, selling over 60 million copies by the time the author — whose real name was James Alfred Wight — died in 1995.

They also generated two movies and a hit television series that ran from 1978-80, and returned for another four seasons between 1988 and 1990.

Still, when Channel 5, in partnership with Masterpiece on PBS, announced a remake of the series in 2019, it didn’t inspire much excitement. But once again, the story demonstrated, as Anatole Broyard put it in his 1972 New York Times review of the novel, “what a satisfying thing ordinary life can be.”

Despite featuring mostly little-known actors (including Nicholas Ralph as James Herriot) and large animals, the new series was an immediate hit when it debuted in Britain in September. It drew over 5 million viewers for each of its six episodes and became Channel 5’s highest-rated show since 2016, charming a nation that after months of Covid confinement and restrictions, was clearly ready for a dose of rolling hills, taciturn farmers and livestock in need of friendly ministrations. 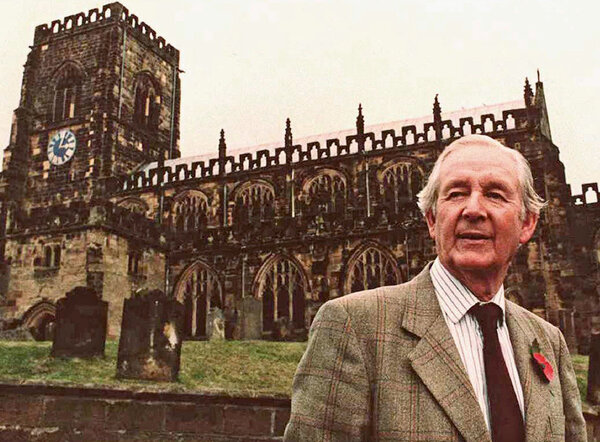 “It’s an old axiom that at a time of great uncertainty people seek certainties,” James Jackson wrote in The London Times. “Channel 5 has recently, by luck or by design, offered solace by being a kind of safe space for older, decent values — a halcyon vision of Yorkshire.” Helen Lewis, in The Sunday Times, put it more succinctly: “Apparently, the best cure for Covid blues is watching a man contend with an abscessed hoof.”

Now “All Creatures,” premiering Sunday on PBS’s “Masterpiece,” arrives in an America in need of its own relief, amid a still-surging pandemic and wrenching political upheaval. “It has the warmth people are looking for during a really challenging time,” Susanne Simpson, the executive producer of “Masterpiece,” said. “It gets at emotional truths that are comforting for us.”

The idea to revisit Herriot’s gentle agrarian tales was actually born of a healing impulse, albeit in response to an earlier national crisis. Colin Callender, whose Playground Entertainment produced the series, first thought about a remake of “All Creatures” after the Brexit vote in 2016, he said.

“The divide in views between the rural and metropolitan areas was really striking, and I was reminded of ‘All Creatures,’ because the books really bridged that divide and appealed so broadly,” he said. “I felt that living in such difficult and complicated times, there would be an audience that wanted a show that was gentle and entertaining, and would bring us together.”

And that, he added ruefully, “was before Covid.”

Callender met Alfred Wight’s children, Jim Wight and Rosemary Page, to discuss the idea. “I think they were skeptical at the beginning, or at least cautious about how it would be brought back,” he said.

They stipulated that the series should accurately portray veterinary practice and farming life in the period covered by the books, and be filmed in Yorkshire. But they agreed to the idea of exploring the characters in more psychological depth, particularly the women — the housekeeper, Mrs. Hall (Anna Madeley) and James’s love interest, Helen Alderson (Rachel Shenton)— who had minor roles in the original series.

There were lots of hints in the books about the type of woman that Helen was, said Ben Vanstone, who wrote the series. And not just Helen.

“It was a bit like a treasure hunt,” Vanstone said. “The books were full of clues to who these people are.” The lead director is Brian Percival, winner of an Emmy for “Downton Abbey.”

The series opens in 1937, as James, a recent graduate of Glasgow Veterinary College, resists pressure from his mother to find manual work and seizes upon the opportunity to interview for a job in Darrowby, a fictional village of in Yorkshire. After a trial by fire (a kicking horse and a SAooth), James is hired by the irascible but kindly veterinarian Siegfried Farnon (Samuel West) and settles down to Yorkshire life in a house run by Mrs. Hall, and shared with Siegfried’s irrepressible young brother, Tristan (Callum Woodhouse), a veterinary student.

“I definitely had slight nerves about filling the Wellington boots of Christopher Thomas, who played James in the ’70s series, because that had such a massive fan base,” said Ralph, a real-life Scot who graduated from acting school in 2017. The books, he said, were his principal source for his character.

“They show James’s intelligence and dedication, his compassion for the animals,” he said. “He’s on the back foot quite a lot, too, with the eccentric boss and the farm animals he has no experience of.”

The role of James is less showy than that of the charismatic Tristan or the eccentric Siegfried, a part that West said he embraced with alacrity, “because I don’t get to be funny very often.” West (who along with Diana Rigg and Matthew Lewis in smaller roles, is one of the bigger-name cast members) is the son of the British actors Timothy West and Prunella Scales, and remembered watching the original series with his parents.

“They were a bit cross they weren’t in it, because every other British actor was,” he said.

He had admired both Anthony Hopkins (in the first film) and Robert Hardy (in the television series) in the role of Siegfried, he said. “The Robert Hardy fan club put out a tweet saying no one would ever be as good, but they were pleased I was going to have a go, which was lovely.”

“It’s like Hamlet or Doctor Who,” he added. “You give it a shot until someone else does.”

All the principal actors went to “vet boot camp,” as Ralph put it. “We got up close and personal to horses, cows, sheep, everything, and went through some of the processes, like looking for abscesses. It was intimidating, but you want every detail right; how a vet would touch the animal, wash his hands, or wear his spectacles around his neck.”

They all learned a lot about farming, said Shenton, whose character runs a dairy farm with her father. “Times were very tough in that era and people didn’t have hundreds of animals,” she said. “If one is ill, it can have a huge effect.”

The original series, noted a review in The Telegraph, “became synonymous with vets’ rolling up their sleeves and rummaging around in the rear ends of startled-looking cattle.” (The James Herriot Museum in Thirsk, the writer noted, has an interactive installation allowing visitors to “put their hand up a cow’s backside.”) But recently implemented rules about using animals on film meant the actors were spared those experiences, and worked with a mixture of live animals and prosthetics.

“You have to work with animals that are good at pretending,” West said. “It’s quite amazing.”

Vanstone said that while the first season leans primarily on Herriot’s first book, a recently commissioned second season will use a mix of the first two in order to broaden both the character perspectives and the kinds of veterinary action on display. The novels include many stories about cows, he said. “I tried to cast a wider net.”

The popularity of the series across age groups (Channel 5 reported a large share of the 16-34 demographic) and audiences suggests that the show hit a sweet spot for family comfort viewing at a moment of national adversity.

“There is something about the show’s focus on community, heart and family that seems to have been particularly resonant at a time when we have all gone through something globally difficult,” Shenton said. And then there’s the aspect that has less to do with community or creatures than with more transportive pandemic pleasures: the show’s ravishing Yorkshire hillsides and time-capsule-pretty villages.

“None of us have been able to move about much this past year,” Shenton said. “But we’ve spent some time in beautiful Darrowby.”