After Reflected Fame, the Artist Karon Davis Steps Into Her Own Light

LOS ANGELES — Some people know Karon Davis mostly by association — with her husband, the acclaimed artist Noah Davis, who died at 32 in 2015; with the Underground Museum that the pair founded in 2012, which features the work of Black artists; with her father, the Broadway song-and-dance man Ben Vereen.

But recently, Davis has been carving out an independent professional identity as an artist, a process that has led to her first solo exhibition in New York at Jeffrey Deitch’s gallery, through April 24.

“I always wanted to do it on my own,” Davis said in a recent interview at her studio in Arlington Heights here, “to prove to myself I was good enough — I got it. No one is going to give it to me.”

While she has shown her work in relatively few shows and spent most of the last few years juggling the museum, her husband’s estate and their 11-year-old son, Moses, Davis has already made a strong impression on the art establishment.

“I see her in between the art world and cinematic theater performance,” said Helen Molesworth, an independent curator who helped birth the Underground Museum and is organizing a show that includes Davis’s work at the Jack Shainman Gallery: The School in Kinderhook, N.Y. 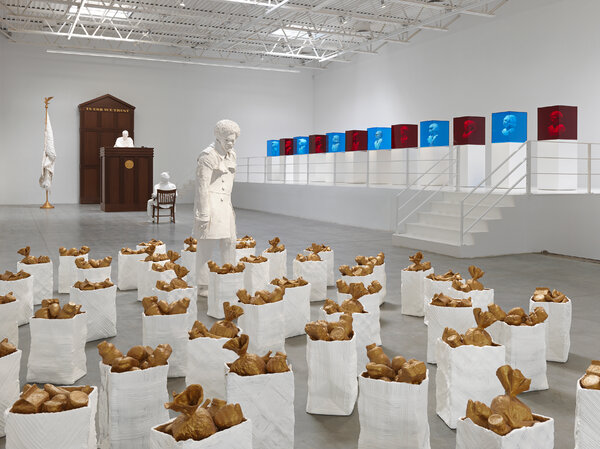 Davis’ unflinching exhibition currently at Deitch, “No Good Deed Goes Unpunished,” features a seated sculpture of Bobby Seale, who founded the Black Panther Party with Huey P. Newton and was bound and gagged in a courtroom at the trial of the Chicago 8 in 1969. The defendants were charged with conspiracy to cross state lines with intent to incite a riot; Seale was eventually tried separately.

The exhibition includes plaster casts of the 12 jurors, each encased in a red or blue vitrine, and a looming sculpture of the federal district judge in the case, Julius J. Hoffman, who rejected Seale’s repeated appeals for permission to act as his own lawyer and sentenced him to four years in prison on 16 counts of contempt of court. (Aaron Sorkin’s recent Netflix drama, “The Trial of the Chicago 7,” focused on the case, which ended up with seven white defendants.)

Deitch invited Davis to do a solo exhibition before the pandemic. Last November the artist, moved by the Black Lives Matter protests, settled on the idea of building a show around the Seale sculpture she had made two years ago. In a surge of creative energy, she completed the remaining pieces in just three months.

“A lot of my emotion went into this show,” said Davis, wearing a patterned mask, biker boots and a purple wig that she said enables her not to worry about her hair on Zoom calls. “I want to immerse people into my experience.”

The Black Panthers adopted a visual logo of a lunging black panther, black berets and a militaristic stance, and sometimes took to the streets with rifles to confront police brutality.

But Davis wanted to show another side of the group. Her exhibition includes a body cast of Seale standing by 50 sculptured bags of groceries to represent the Panthers’ free food program.

“They were really just trying to uplift and take care of their community,” she said, “but all that was being shown was men with guns.”

Davis’s original Seale sculpture had been gestating for some time. She grew up hearing about how her father, as a young actor, voiced the part of Seale for a reading of the trial transcript, which was released as a vinyl record.

For years, Davis searched for a copy, finally finding one in an antiques store in the Leimert Park section of Los Angeles, and listening to it, rapt.

“It just felt like this is a story that didn’t end there,” she said.

In making the sculpture, Davis left the wrapping of Seales’s mouth and hands till the last minute. “I had to take two shots of tequila and I cried,” she recalled. “I thought of all the Black men and women who have been gagged, who have been silenced.”

Drawing on her theater and film background, Davis conceived of the exhibition as a director would a stage set, designing the judge’s bench and a pile of sand bags and casting the roles using parts of her own face and those of others.

“It’s like a frozen play,” said Deitch, the longtime art dealer and former director of the Museum of Contemporary Art, Los Angeles. “You come in, and you’re inside the performance.”

He added, “It’s the best exhibition that I’ve presented with an emerging artist ever.”

There was only one existing group photograph of the jurors to work from, Davis said — nine white women, one Black woman and two white men. She put them in individual vitrines, she said, so they would reflect each other and reflect back on themselves.

She described the sandbags as a “bit of a shrine” to the Black Panthers’ headquarters in New Haven, which was always under threat. “I don’t think people know this story,” Davis said, “the lengths they had to go to protect themselves.”

Her casts are made up of white strips, reflecting Davis’s longstanding fascination with ancient Egypt and mummification. The fraying flag in the installation represents a sense of disillusionment with the country. “We’re sold this dream,” Davis said, “and it’s fallen apart and tattered.”

Deitch, a longtime fan of the Underground Museum, had featured Davis’s work in his New York show “People” in 2018. One of the pieces from that exhibition, “Nobody,” about the history of Black vaudeville, is now in the collection of the Museum of Fine Arts, Houston.

She has also tackled topics like climate change and flood displacement in “Muddy Water,” her 2018 solo show, and loss in her 2016 “Pain Management” solo show — both at the Wilding Cran Gallery in Los Angeles. (One of her sculptures was included in David Zwirner’s acclaimed Noah Davis show last year.)

Her work is also in the collection of the Hammer Museum and the Brooklyn Museum. After seeing her installation “Game” at the Frieze L.A. art fair in 2019, the Hammer acquired the piece, which addresses mass shootings through the sculptures of two students and a teacher, all in antlers, near the steps of a school.

“The way that she is responding to the subject of gun violence in this country and the vulnerability of children in the simple act of attending school was really powerful,” said Connie Butler, the Hammer’s chief curator. “It’s about the children being hunted.”

Davis continues to explore the question of safety in schools in her installation for the upcoming Shainman show, which features girls playing double Dutch jump rope and a student hiding under a desk as an eight-foot sculpture of Mother Superior hovers nearby.

An ebullient presence who would only give her age as “in my 40s,” Davis was born in Reno, Nev., and was raised in New York and New Jersey.

She recalls spending time in the theater wings and dusty rehearsal halls of her father’s stage productions, as well as being influenced by her mother, Nancy Vereen, a ballerina. Davis grew up taking dance classes, and hoped to someday join Alvin Ailey American Dance Theater and perform the company’s elegiac tribute to Black women, “Cry,” which she had seen movingly rendered by Donna Wood.

After two years at Spelman College, Davis transferred to film school at the University of Southern California, graduating in 2001.

It was while working as a personal assistant to a film director in Los Angeles that she met Noah, who encouraged her to explore her own art.

“He was my biggest fan,” Davis said. “He saw something in me I didn’t see in myself. I was a closet artist.”

Moving on in life without her husband, who died of a rare cancer, has been somewhat eased by making art. “It’s always been therapeutic for me,” Davis said. “I put all my emotion into the work.”

Only recently did Davis begin focusing more fully on her practice, getting a studio near the Underground Museum in 2019, moving to Los Angeles from Ojai last July after her mother died, learning what it means to be a working artist in her own right.

“I was thrown into this,” she said. “It’s been a huge learning curve.”

She said she has been inspired by the Black female artists succeeding around her — Lorna Simpson, Lynette Yiadom-Boakye, Njideka Akunyili Crosby, Simone Leigh, February James.

Still, she can’t help but regret that Noah did not live to share in her success, to rejoice in the distance she’s come.