Collins’s insistence on portraying the ordinariness of African American women’s lives rather than reproducing the Hollywood narratives that pathologized or mythologized them is resonating with a new generation of Black women artists who have recently discovered Collins and her work. Part of what makes Collins’s writing so appealing is her attention to the complex internal struggles and external journeys, of what Elizabeth Alexander calls those “Bohemian Black women” who often work as artists and academics, and have a robust intellectual life. Because she renders them with such care and imbues them with such vulnerability, her characters have heightened insights and are aware that they are both liberated and alienated by their knowledge of how others see and stereotype them.

Such rich psychological portraits of Black women are what originally drew Afrofemononomy, a group of Black femme theater artists, to Collins’s plays. In addition to adapting that Howard University speech into a monologue, they are also performing “Begin the Beguine,” a quartet of Collins’s one-acts that have never been produced before.

Over the past two weekends, under a program titled “Work the Roots,” Afrofemononomy performed the title play “Begin the Beguine,” about the actress Ruby Dee and her son, the blues guitarist Guy Davis, as well as “The Healing,” “The Reading” and “Remembrance” at various locations in New York City (from a lawn in Harlem to a park in Bedford-Stuyvesant). On Saturday, May 29, they will perform “The Essentialisn’t,” a theatrical work by one of the group’s members, Eisa Davis, and premiere a mixed-media installation, “Gold Taste,” which will be available for viewing until June 27 at Performance Space New York’s Keith Haring Theater. 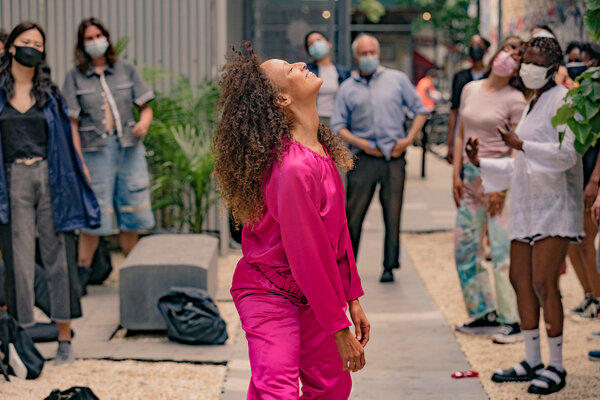 The debut of Collins’s plays is part of a continuing resurrection of her works after her death from breast cancer in 1988 at the age of 46. Largely because of her daughter Nina Lorez Collins’s commitment to preserving her mother’s legacy, we are now able to access the gifts of Collins’s ambitions and archive, including the theatrical release in 2015 of her 1982 film, “Losing Ground”; the publication of her short story collection “Whatever Happened to Interracial Love?” in 2016; and, in 2019, the arrival of “Notes From a Black Woman’s Diary,” a mélange of her short stories, plays, diary entries and film scripts.

Davis, an actress and playwright recently seen in HBO’s “Mare of Easttown,” first became acquainted with Collins’s writing when Nina Lorez Collins asked her to do a public reading of Collins’s short stories in 2017. But, she now realizes, Collins has been with her a lot longer. “She is a literary foremother for me that has just been under my nose all this time,” Davis said. “When Nina first gave me these plays, I was like, ‘Kathleen Collins, Kathleen Collins, Kathleen Collins,’ and then I looked at my bookshelf and I found ‘9 Plays by Black Women,’ an anthology from the 1980s, and her ‘The Brothers’ in there. It’s the only play of hers that was ever produced at American Place Theater.”

Once she read Collins’s other plays, she immediately shared them with her friends and other Black female theater artists with whom she frequently collaborated in the most quotidian of ways: over dinner, on museum trips and visits to the beach, via texts, after seeing plays together, and, in the past year, over Zoom. By 2019, their casual interest in Collins’s plays turned into the more concrete idea of staging and sharing them with the broader public.

“In a lot of ways, this was an attempt to take the model of our friendship and then apply it to the conditions under which we collaborate,” Davis said.

The director Lileana Blain-Cruz (“Marys Seacole”) said learning about Collins’s plays enabled her to take different risks. For the project, she has thoughtfully transformed Collins’s “The Reading,” a 30-minute play that anticipated our conversations about racial microaggressions today. Set in a Black psychic’s waiting room, a tense conversation ensues between Marguerite (Kara Young), a Black fashion designer, and Helen (Amelia Workman), a white romance novelist. As Helen tries to assert her entitlement, Marguerite pushes back, and eventually denies Helen an opportunity to take up the space that she, as a white woman, feels obligated to inhabit.

“For me, the celebration and the exploration collectively around Kathleen Collins’s work is another way of seeing each other before we even knew how to see each other in existence and collectivity,” she said. “That, for me, is really moving because I was like, ‘Oh, this is somebody that I should have known.’” She added, “Now I get to discover, and I don’t have to discover alone.”

In addition to the moving performance by individual actors, these plays, which were not open to critics to review, were made even more engaging because of the casting and staging. Collins wrote “The Healing” and “Remembrance” with white characters but because Afrofemononomy cast from within their group, they provided a space in which Black actresses were always front and center. This gesture was intensified by the intimacy of their set. At the end of “The Reading,” the audience was led by the actress Jennifer Harrison Newman to dance with the cast, an invitation that turned the luminescent installation and graffiti scrawled wall that read “Last night, I dreamt I danced in the image of God” (a line from the other Collins play, “Remembrance”) into a communal party celebrating Black women’s creativity.

By inviting us to these tender moments in which Collins’s Black female characters pull back their layers, the performances themselves transport both those fictional characters and this real-life Black cast far beyond the strict racial and gender categories that envelop them and us.

“These are stories about the interior lives of Black women,” Nina Lorez Collins told me. “One of the reasons I like the “Begin the Beguine” is because it is about race, but it is also not. It’s really about the interior life of this artist, this young woman. And I just don’t think we’ve seen anything like it.”

As avant-garde as Collins’s characters were in her time, they still remain singular today, giving us rare social insights into how we can navigate our unique moment of slowly returning to each other, to public spaces, and ultimately, live, in-person performances. In the foreword to “Notes From a Black Woman’s Diary,” the fiction writer Danielle Evans described Collins as “a master of the moments when the interior becomes the exterior, when all pretense drops away.”

This blurring between our inner selves and the identities projected back onto Black women was at the heart of Afrofemononomy’s take on “Remembrance,” described as “a kind of personal séance.” Under the directorial consultation of Jackie Sibblies Drury (“Fairview”) and featuring Davis as The Woman and Kaneza Schaal as Collins talking to the Howard students, this becomes a conversation between two Black women who, while each giving their own monologue — one taking place in a bathroom, the other at a lectern — end up, at times, dissolving into each other. All the while they demand the audience see Black women in public with the same clarity that we see ourselves in private.

But such revelations and reversal of gazes will also be critical to large swaths of the American theater community that is still grappling with debates about inclusion, equity and white gatekeepers as it seeks to attend to the harm of racism, and institutionalize the healing that Collins’s vision offers for her Black characters and for the Black female theater artists who embody them.

After spending two weeks performing, and four years studying Collins, Afrofemononomy decided to close with Davis’s music theater piece “The Essentialisn’t” in the group installation “Gold Taste,” and reimagine a much earlier moment when the Harlem Renaissance writers W.E.B. Du Bois, Jessie Fauset and Nella Larsen debated racial representations in their era. It begins with the ever vexed question, “Can You Be Black and Not Perform?”

Extending Collins’s legacy to Davis, the Afrofemononomy member Kaneza Schaal said, “Eisa is [also] sitting on a trove of plays she has written. And it is up to us, to see to it, that our own daughters are not the first people to produce that work.” She continued, “It is urgent to address Davis and Collins simultaneously. The intellectual harmony Eisa creates with her foremothers is astounding, and yet another extension of this fabric.”