Why Are Meghan And Harry Bracing For More Negative Press?

Prince Harry and Meghan Markle are in for a wild ride as the battle between British media and the Duke and Duchess of Sussex continues.

The drama first began to unfold the minute Meghan and Prince Harry said “I do” back in 2018. Since then, the British press has been increasingly harsh on the duchess, with American outlets even calling out the stark differences between how the British press treated Duchess of Cambridge Kate Middleton. The salacious stories about Meghan reached a peak when a personal letter she had sent to her estranged father was published. The duchess filed a suit against Associated Newspapers, the publishers of The Mail and the Mail on Sunday papers in the U.K., and she eventually won.

After Harry and Meghan officially left their royal duties for private life in California, attacks against the duchess intensified. And supporters of the royal family were only more agitated when the couple decided to tell-all in an explosive interview with Oprah Winfrey. Per usual, British TV host Piers Morgan stepped in with his own hateful opinions on the interview and downplayed Meghan’s claims she was suicidal while in the royal family. “Good Morning Britain” fired Morgan, which at the time looked like another win for the Duke and Duchess of Sussex against British media. But it didn’t last long, and the couple is now bracing for more negative press, thanks to a new judgment.

British press claims it's "open season" for the Sussexes

Following viral comments made by Piers Morgan about Duchess of Sussex Meghan Markle in regards to her claims she had “suicidal thoughts” within the royal family, complaints from around the world piled in for British media watchdog Ofcom. In fact, according to The Daily Beast, a whopping 57,793 complaints were filed against Morgan, who was then let go from his anchor position on “Good Morning Britain.”

Six months after the explosive interview with Prince Harry and Meghan and Oprah Winfrey, Ofcom revealed its final verdict on Morgan, siding with the host’s right to not believe “a word” the duchess said in the CBS interview. “Mr. Morgan was entitled to say he disbelieved the Duke and Duchess of Sussex’s allegations and to hold and express strong views that rigorously challenged their account,” read the verdict, according to The New York Times.

So what does this mean for the royal couple? Most likely, there will be a wave of negative press to come from British media. “I think for many commentators/opinion writers they’ll use the ruling to take the gloves off,” admitted one British editor to the Daily Beast. “It’ll be open season.” The new ruling gives flames to the already-burning fire between the Duke and Duchess of Sussex with the British press, and Piers Morgan seems to be celebrating.

Piers Morgan asked for his job back 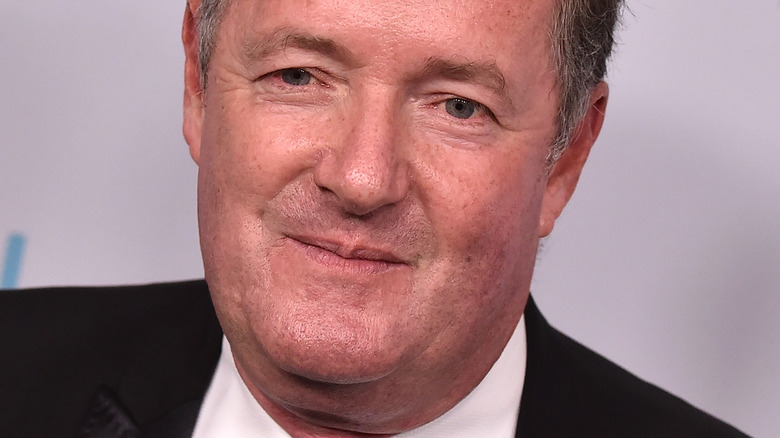 Piers Morgan has never been one to shy away from sharing his true opinions on…well…everyone, even if his comments put his career at stake.

Following the bombshell interview between Oprah Winfrey and Meghan Markle, Morgan used his position on “Good Morning Britain” to express disbelief in Meghan’s claim she was refused treatment while having suicidal thoughts within her time with the royal family. Co-host of “GMB” Alex Beresford then publicly called out Morgan for his obsession with the duchess, leading the host to storm off set and media watchdog Ofcom to open an investigation into Morgan based on “harm and offense” rules (via The New York Times). With Ofcom siding with Morgan on the controversial case, the former host is now celebrating and even asking for his job back.

“I’m delighted OFCOM has endorsed my right to disbelieve the Duke & Duchess of Sussex’s incendiary claims to Oprah Winfrey, many of which have proven to be untrue,” wrote Morgan on Twitter. “This is a resounding victory for free speech and a resounding defeat for Princess Pinocchios. Do I get my job back?”

The answer to that question is “no,” as “GMB” reportedly has no intention of hiring Morgan back, according to the Mirror. However, that didn’t stop the former host from writing an opinion piece for the Daily Mail calling the royal couple “self-satisfied Sussexes” and Meghan Markle a “whiny fork-tongued actress.” Harsh…