Tabloid headlines about a feud between Prince William and Prince Harry have been kicking around since the latter got serious with Meghan Markle. As we know, the relationship was quite a whirlwind, and at first, reports claimed that William urged his younger brother to pump the brakes. Per the TLC documentary “Kate V. Meghan: Princesses at War?” (because yes, that was the real name of a real documentary), a royal expert claimed (via Fox News) that William’s “well-intended brotherly advice” to slow things down “riled” Harry. The speculation only grew from there.

In 2018, The Sun claimed that Harry and Meghan decided to split from William and Kate Middleton, opting to live in a home on the grounds of Windsor Castle rather than Kensington Palace. This appeared to be a sort of precursor to the Sussexes’ break from the Crown. By the time the Sussexes had their bombshell Oprah Winfrey interview, the two brothers weren’t even speaking. As Harry put it, the pair were on “different paths” — but how serious was the fight to begin with?

In this exclusive interview, Stewart Pearce, who served as Princess Diana’s vocal coach, tells Nicki Swift what he really thinks about William and Harry’s royal rift. Is there a chance for reconciliation? 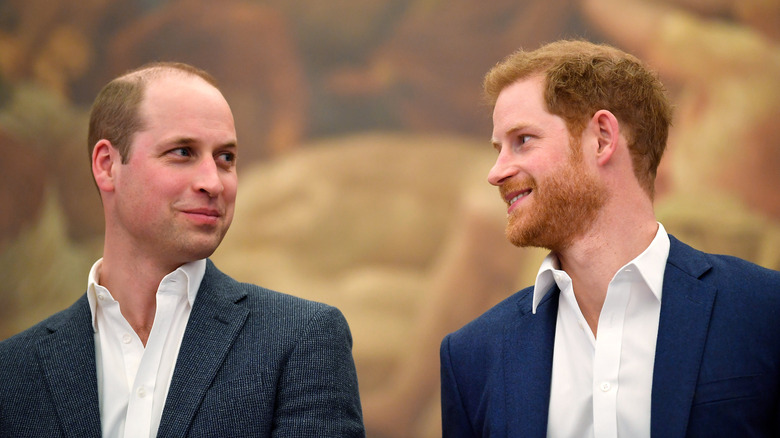 If we’re going by the tabloids, Prince Harry and Prince William are in the midst of an epic battle. If anything, it was big enough that William felt compelled to speak to the press following his brother’s interview with Oprah Winfrey, a typical royal no-no. According to Sky News, that’s when Wills revealed the brothers hadn’t spoken but “will do.” Since then, the pair did reunite at Prince Philip’s funeral where they “put on a friendly show,” according to The Daily Beast. After Meghan had Lilibet Diana, the couple’s second child, Kate Middleton also revealed she “can’t wait to meet” her niece. These appeared to be the first seeds of reconciliation, but maybe the whole thing was blown out of proportion to begin with.

Pearce, for one, isn’t buying the headlines. As he tells Nicki Swift, “It’s actually quite outrageous the way that the British press have taken odd facts and they distorted them out of all proportion.” The biggest example? The feud between Harry and William. “God’s sake, they had a disagreement like brothers disagree,” he says. “I had a disagreement with my brother the other day, but that doesn’t mean to say that we’re warring with one another.”

Pearce reveals that “of course” the feud ended “after the declaration of the Martin Bashir deceitfulness” surfaced in May. It was something larger than both of them, and the pair “came together” as a “unified front.” Brothers typically only fight so long.

Pearce’s book, “Diana the Voice of Change,” is available now via Amazon or bookstores everywhere.