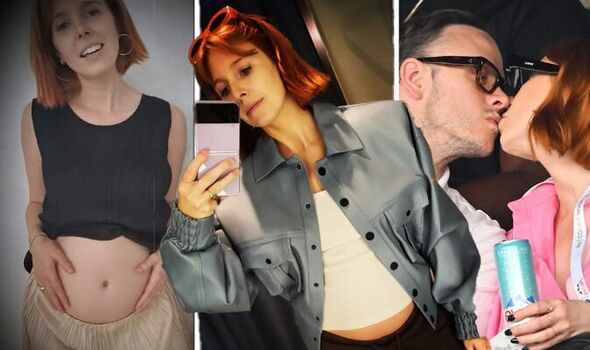 With the pregnancy glow in full flow, Stacey posted a new photo to her Instagram feed which saw her posing in a darkly lit room. The star was lit up by the light of the mirror, her bright ginger hair shining as she wore orange-rimmed sunglasses on top of her head and an icy blue coloured jacket over a white t-shirt that barely covered her bulging belly.

Keeping her one million Instagram followers up-to-date every step of her pregnancy, Stacey Dooley, 35, shared the latest snap showing just a glimpse of her growing bump in a t-shirt that struggled to cover the whole of her stomach. The documentary maker added she is “v v excelly” (sic) about her new arrival.

Former Strictly Come Dancing professional Kevin Clifton, 39, and Stacey first announced their baby news in August, with the latter posting a picture of a polaroid photograph where she is seen flashing a smile and holding her stomach.

She captioned the image: “Gaaaaaaang….. We are having a baby! So bloody delighted. Kev, you’re magic, I love youuuu. (Was becoming impossible to hide and if one more person asks me if I’ve had my tits done in LA I’m gonna scream).”

Stacey and Kevin are expecting their first child almost four years after they first met and were partnered together on Strictly Come Dancing.

Back in July 2019, the pair gave a rare insight into their relationship, as Stacey called her new beau “amazing” adding: “I’m happy, life happens, I’ve got an amazing career and I’m very lucky.” 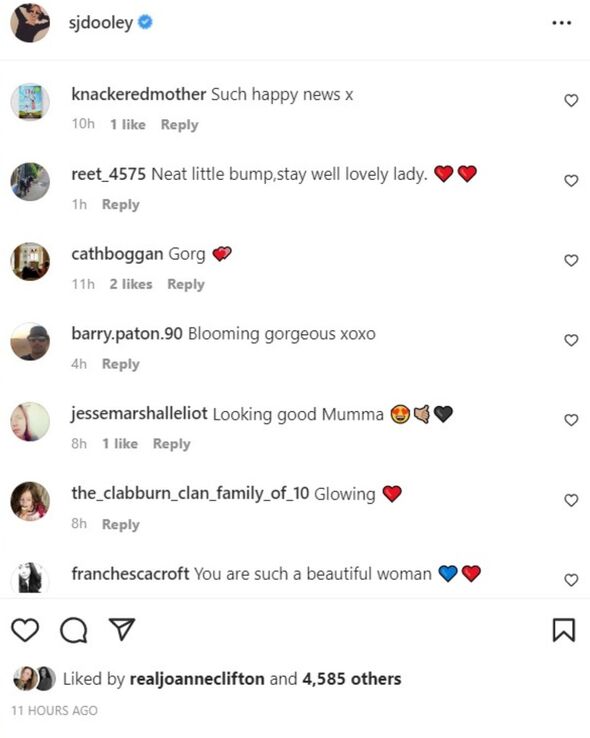 In the comments of the photo which has gained nearly 5,000 likes, fans of the television personality complimented her petite figure and praised how good she is looking in her early pregnancy. User @emmamcrogers wrote: “Rocking that bump.” And @jessemarshalleliot added: “Looking good Mumma.” 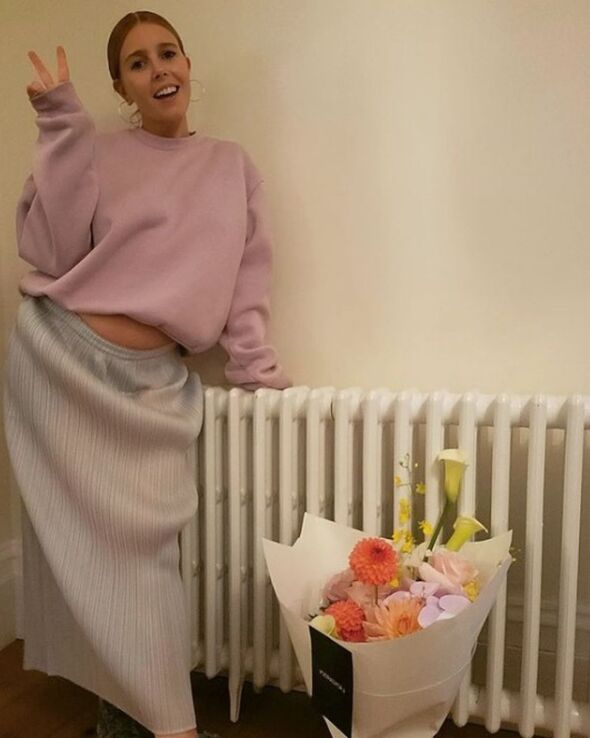 Flashing her bump once again Stacey shoots a peace sign

Holding her fingers up in a peace sign in another image posted to her social media site, Stacey’s bump could once again be seen poking out beneath her clothing as she thanked a company for sending her flowers. The presenter could be seen wearing a silver pleated maxi skirt and a cropped baby pink sweater. Peeping between her clothes, Stacey’s ever-growing bump was clear to see. 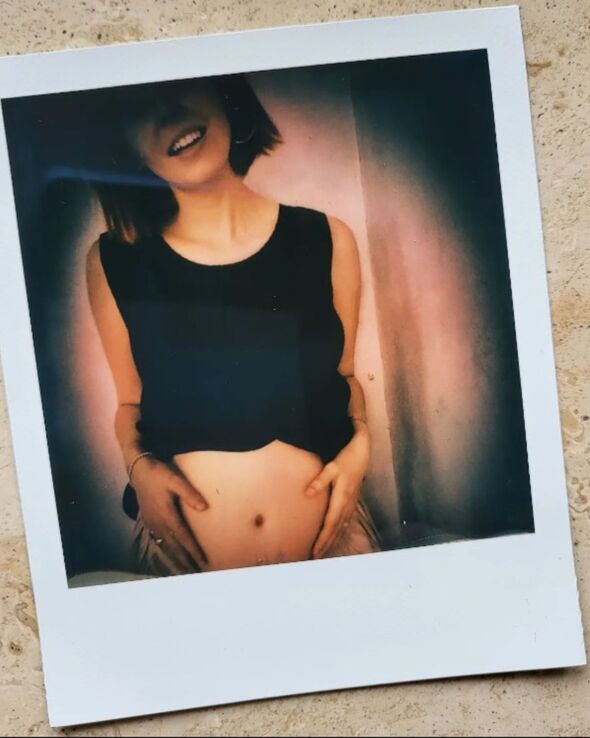 Cheekily asked by multiple people if she had had plastic surgery on her breasts, Stacey shared that her pregnancy had become “impossible to hide” so decided to go public with the news. Laughing in the caption that accompanied her pregnancy announcement picture Stacey wrote: “If one more person asks me if I’ve had my tits done in LA I’m gonna scream.” 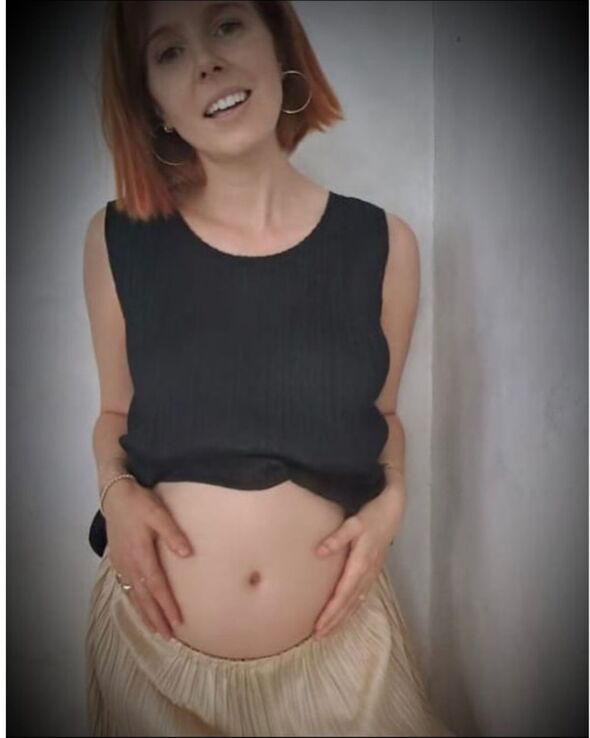 Announcing the pregnancy news separately on his Instagram account, father-to-be Kevin captioned a similar image of pregnant Stacey: “We’re having a baby! And I think my girl @sjdooley looks beautiful pregnant.” 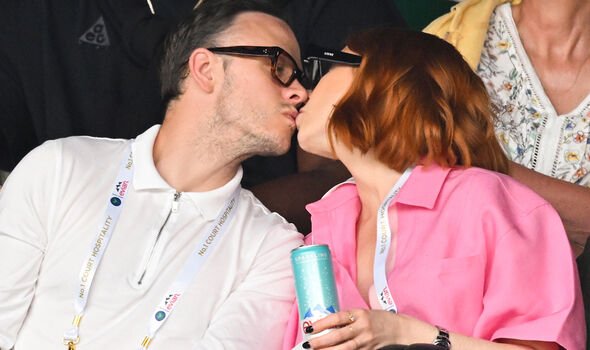 The loved up couple got intimate at Wimbledon 2022

Attending day one of Wimbledon earlier this year, Kevin and Stacey were pictured sharing a sweet embrace whilst sitting in the stands. Both wearing large framed glasses, Kevin was dressed all in white while Stacey rocked an oversized pink shirt. The pair were yet to announce their pregnancy news. 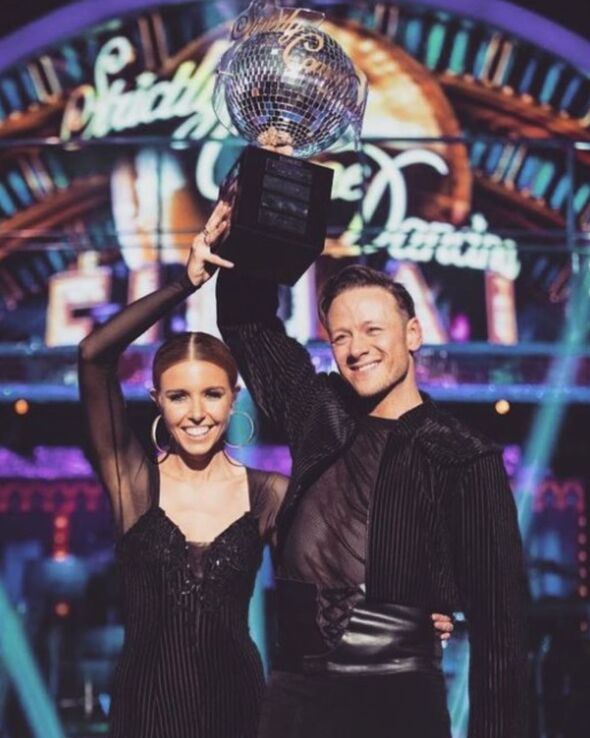 The pair lifted the Glitterball trophy together in 2018

Having battled the competition Kevin and Stacey lifted the glitterball trophy together after being announced winners of Strictly Come Dancing back in 2018. In a sweet Instagram post, Stacey referred to her partner as “King Kev,” a nickname he developed when appearing on the show.