Lady Lucinda Lambton was so angry that her brother, Ned, inherited the family’s £35 million estate as well as the Earl of Durham title that she and two of her sisters took him to court.

Happily, there are no such problems with the will made by her husband, the former newspaper editor Sir Peregrine Worsthorne, who died last October aged 96.

I can reveal that Worsthorne left more than £2.3 million in his will, with the vast bulk going to Lady Lucinda, 78 (with him, below).

Newly published probate documents disclose that the former Sunday Telegraph editor, known to friends as Perry, left a gross estate of £2.3 million, the income from this going to Lady Lucinda, also a writer.

He left legacies of £20,000 each to five grandchildren, and £5,000 to his assistant Claire Allan ‘in recognition of her assistance beyond the call of duty over many years’. 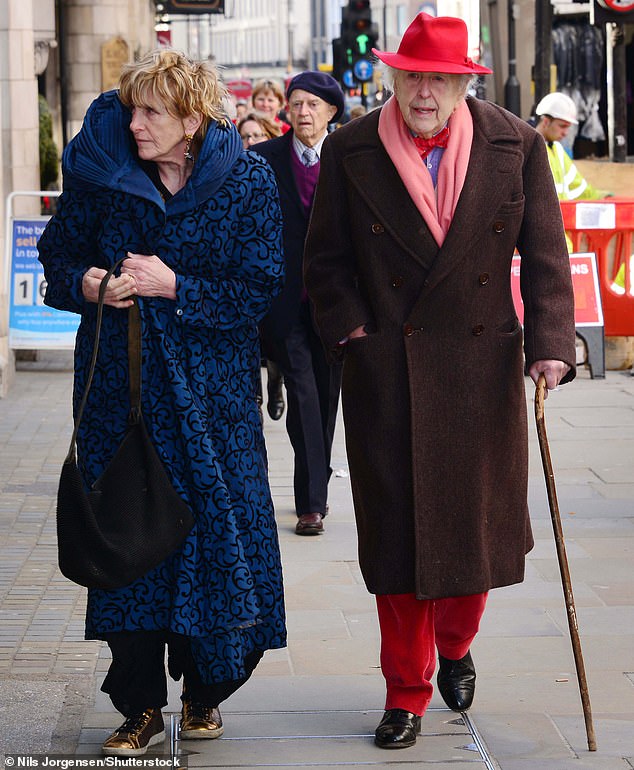 After Lucinda’s death, both the capital and income of his estate will go to his daughter, Dominique Keeling, who runs Whichford Pottery in Warwickshire with her husband, Jim. 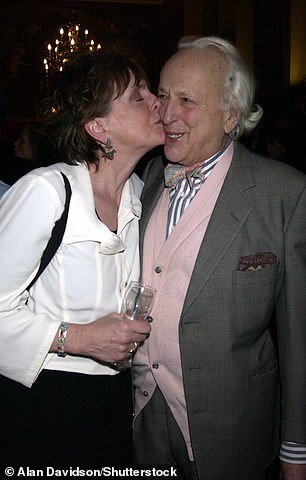 Lucinda Lambton with her husband Peregrine Worsthorne in 2003

Worsthorne, who became the second man to use the F-word on British television, was awarded a knighthood for services to journalism in 1991.

Always immaculately dressed, he was educated at Stowe and Cambridge before joining the Oxfordshire and Buckinghamshire Light Infantry, but was injured, and spent time at Oxford, where he was tutored by C.S. Lewis at Magdalen College.

Noted for his bohemian tendencies, the luxury item Worsthorne chose on Desert Islands Discs in 1992 was a lifetime supply of LSD. His first wife, Claudie Baynham, died in 1990 and he wed Lady Lucinda, daughter of Tory defence minister Lord Lambton, just a year later.

Ned, on his father’s death in 2006, bypassed his sisters as the sole heir under English primogeniture rights, yet they claimed they were entitled to an equal share under Italian law, as Lord Lambton had lived there. 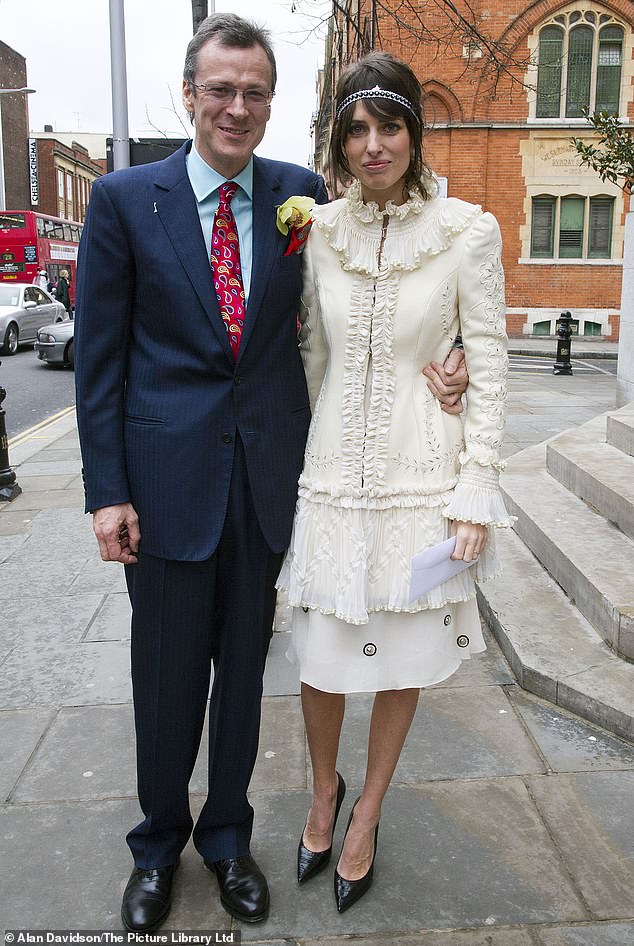 For Lily, all that glisters is . . . Gold’s horseradish

Doll-faced supermodel Lily Cole has struck gold while on holiday in Portugal.

Sporting a mustard-coloured bikini, the 33-year-old was voluntarily helping to clean up a beach with a friend when she came across an unopened jar of horseradish. 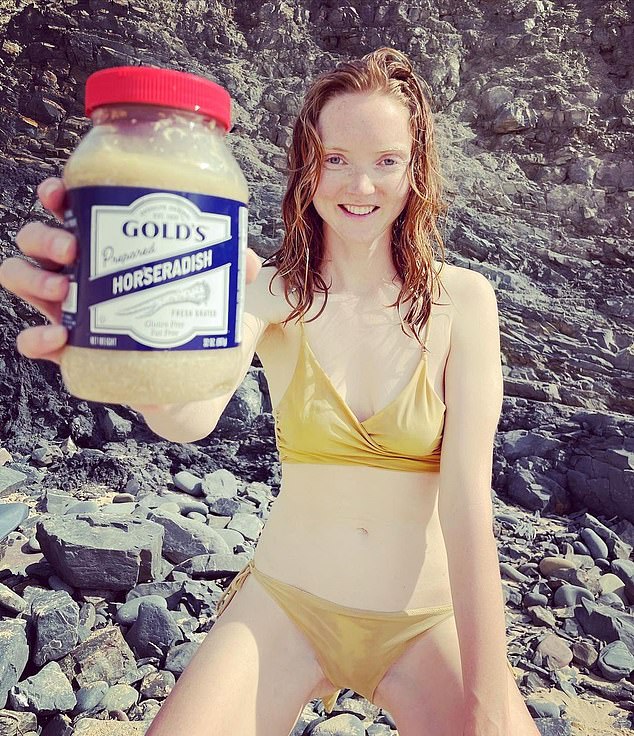 ‘Fished out, bobbing in the Portuguese sea — a sealed tub of Gold’s horseradish from Brooklyn, New York. The things you find on a beach clean,’ she muses, sharing a picture by Wylde, her five-year-old daughter with businessman Kwame Ferreira.

‘My friend tried it and said that it tasted ‘fresh’ — I choose to take his word for it,’ she jokes. 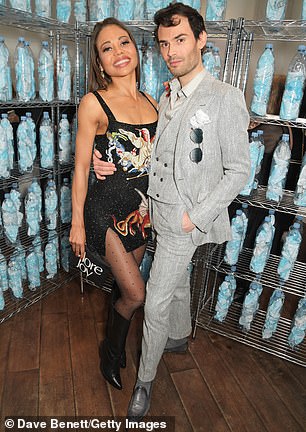 Strictly star Emma Weymouth is leading the way as London’s social scene gets back to normal.

On the night lockdown restrictions were eased this week, the Marchioness of Bath, 35, attended a private view in Soho of Piotr Krzymowski’s exhibition, Major Incident, which features art made from single-use masks and gloves found on London’s streets during the pandemic.

Joined by Made In Chelsea star Mark-Francis Vandelli, the mother-of-two, whose husband Ceawlin owns the Longleat estate in Wiltshire, sported a £1,950 Annie’s Ibiza minidress of recycled polyester and beads.

More from Sebastian Shakespeare for the Daily Mail…

A Frost heading your way

Watch out, Sadie Frost could be moving in next door! The queen of the Primrose Hill Set, famed for its wild parties and debauched hedonism, is packing up her £6 million house in North-West London.

The mother of four, who was married to Gary Kemp and Jude Law, says: ‘My head’s in a whirl. I have started packing my house up — 20 years of living. It will take a month to go through everything. It’s very exciting but nerve-racking also, as I want to make the right decision of where I move to. Do I stay in London? Or move to the countryside?

‘Where will I be happy in this next phase now that nearly all my chicks have flown the nest? I know the answer will come to me soon.’

Sophie Dahl’s ode to her own Esio Trot 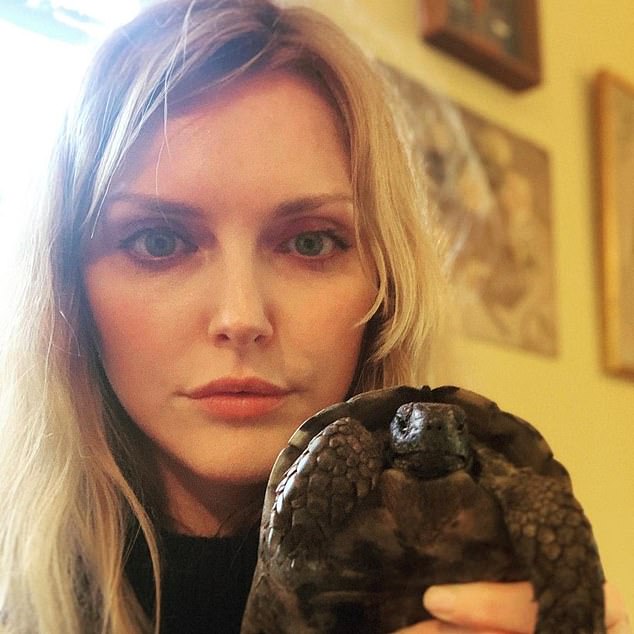 ‘Between us, 124 years of wisdom, life experience, and lascivious interest in Ugg slippers (him not me),’ she captions this selfie online.

‘The biblical hail/rain storm of earlier removed the make-up from half of one of my eyes, the lazy one, deftly completing the look I present to you here: Rain beaten, kinda crooked Mammal/Reptilian Bonnie and Clyde who would like the sun to come out, and stay out, because it’s May, goddam it.’

The path of true love is not running smooth for TV presenter Gethin Jones, ex fiance of opera singer Katherine Jenkins. ‘I have never given up on finding the right partner,’ says the handsome Welshman. ‘I’m single — but can you tell me how you are supposed to have dated in the past year?’