While many Internet users note that her ring is not the typical diamond engagement ring, the ‘Vanderpump Rules’ star asks, ‘Why does it matter what stone?’

AceShowbiz –Scheana Shay doesn’t think something is wrong with her engagement ring from fiance Brock Davies. The “Vanderpump Rules” star defended Brock for giving her the morganite engagement ring instead of diamonds.

Fans started making comments on the band after watching the Tuesday, January 4, episode of the Bravo series. The episode saw Brock purchashing the special piece of jewelry before proposing to the 36-year-old reality TV star.

While many people noted that it wasn’t the typical diamond engagement ring, Scheana wrote to a fan on Twitter, “It’s still 12.74 carats. Why does it matter what stone?” She doubled down on her statement in a follow-up tweet on Wednesday.

When one of her followers said that Robyn Dixon also has a morganite engagement ring and that “morganite is actually more rare, there’s less of it naturally in the world than diamonds,” Scheana responded, “I agree. I didn’t want a Diamond. Morganites are beautiful and have so much meaning.” 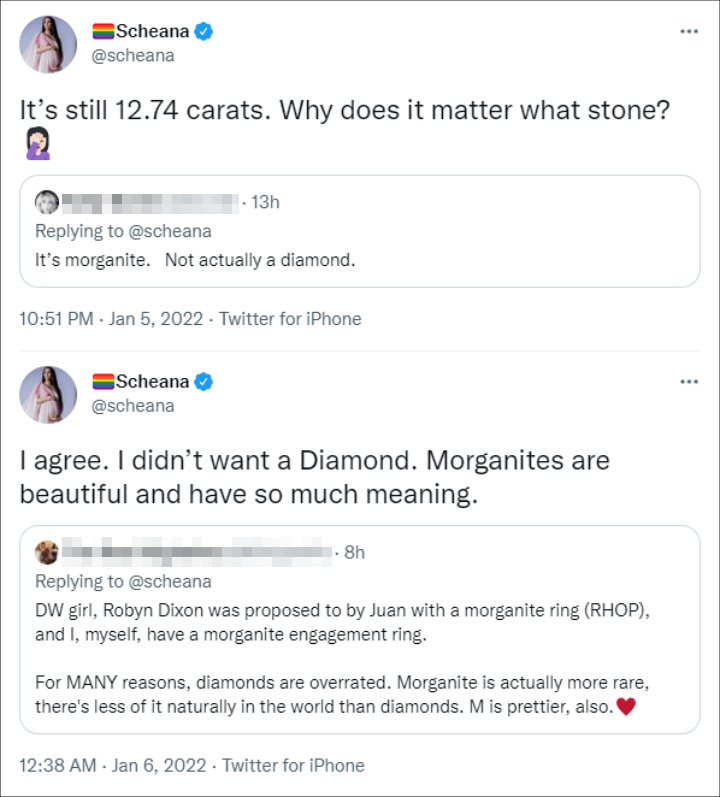 In the Tuesday episode, Brock attempted to give the “Good as Gold” singer a surprise engagement and wedding event. The former rugby player initially enlisted Lala Kent and Randall Emmett to help him with the proposal. However, after the venue fell through, he asked Ariana Madix and Tom Sandoval to assist him in performing a secret wedding ceremony.

Ariana then took to Twitter to address the delay in the plans. “I feel compelled to let y’all know we missed 7-10 days of filming bc of a covid scare and we went from having multiple events this proposal could be done at to like almost nothing left. there was nothing normal about trying to film amidst covid,” the former SUR bartender tweeted after the episode aired.

“For example, there was going to be a party at a really nice house in the hills that would have been perfect, but then that was taken away bc covid. i really wanted to be able to help brock make this happen but alas,” she added/