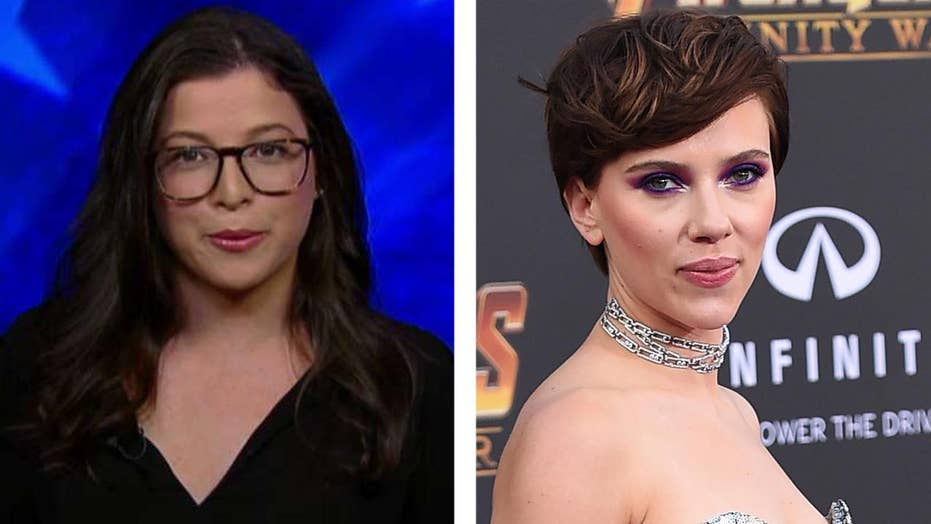 Actress Scarlett Johansson was supposed to play a transgender person in an upcoming film, but has quit the role after LGBT activists attacked her for not leaving the role to another transgender person. Daniella Greenbaum wrote an article defending Johansson and her Business Insider editors deleted it. #Tucker

Scarlett Johansson slammed a report that emerged on Saturday morning in which she appeared to blast political correctness in casting.

The actress, who was widely criticized for accepting a role as a transgender man in the upcoming "Rub & Tug," said through her rep that a quote from an interview saying she "should be allowed to play any person" was "edited for click bait" and "widely taken out of context."

“The question I was answering in my conversation with the contemporary artist, David Salle, was about the confrontation between political correctness and art,” Johansson's rep told Entertainment Weekly in a statement on Sunday. “I personally feel that, in an ideal world, any actor should be able to play anybody and Art, in all forms, should be immune to political correctness. That is the point I was making, albeit didn’t come across that way. I recognize that in reality, there is a widespread discrepancy amongst my industry that favors Caucasian, cis-gendered actors and that not every actor has been given the same opportunities that I have been privileged to."

SCARLETT JOHANSSON SAYS 'DEMOCRATIC PARTY IS BROKEN IN A LOT OF WAYS,' REVEALS IF SHE'D EVER RUN FOR OFFICE

The statement continued, "I continue to support, and always have, diversity in every industry and will continue to fight for projects where everyone is included.”

On Saturday, The Daily Mail published quotes from the 34-year-old "Avengers" star's recent interview with As If magazine, one of which read, “You know, as an actor I should be allowed to play any person, or any tree, or any animal because that is my job and the requirements of my job. I feel like it’s a trend in my business and it needs to happen for various social reasons, yet there are times it does get uncomfortable when it affects the art because I feel art should be free of restrictions.”

Johansson was previously slammed for signing on to "Rub & Tug." Initially, she released a flippant statement about the outcry, telling press of the backlash to her casting, “Tell them that they can be directed to Jeffrey Tambor, Jared Leto, and Felicity Huffman’s reps for comment.” Her rep claimed that the comment came directly from Johansson herself.

She later apologized for her remarks.

“Our cultural understanding of transgender people continues to advance, and I’ve learned a lot from the community since making my first statement about my casting and realize it was insensitive,” she said upon exiting the role. “I have great admiration and love for the trans community and am grateful that the conversation regarding inclusivity in Hollywood continues.”

"Rub & Tug" is set to be directed by Rupert Sanders, who also directed "Ghost in the Shell." That film came under fire for allegedly whitewashing the protagonist, played by Johansson in a black wig. In the manga on which the film was based, the main character was Japanese.