Ryan Reynolds is the cutest girl dad, which is not surprising news. Ryan recently opened up about what it likes to be a dad to three (!!!) daughters with wife Blake Lively. The A-list couple share daughters James, 5, Inez, 4, and Betty, 1, making them one of the cutest families in Hollywood.

“I love being a girl dad,” he told Access Hollywood on Friday, Nov. 13. “I have three daughters, which I never in a million years would have imagined. I come from all boys. I have three older brothers. I’m the youngest of four boys so for me to have three daughters has been such a ride and I love every second of it.” 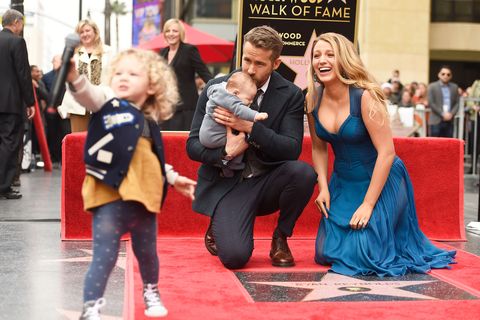 He continued, “No joke, they are the most capable people I know. If anything got crazy or scary in my life, they are the first people I would lean on because they have wisdom and strength and they’re calm under fire. They have courage under fire. I just try to be as present as possible. We don’t split up like I shoot movies and my wife shoots movies and we go travel all over the place and we just all go together. I think that’s been the best part of it is that we really don’t spend a lot of time apart. I get to spend a lot of time with my girls.”

Blake and Ryan first met on the set of their movie, Green Lantern. They later began dating in 2011 and tied the knot less than a year later. They’ve both admitted to wanting a big family… so here’s to even more daughters!