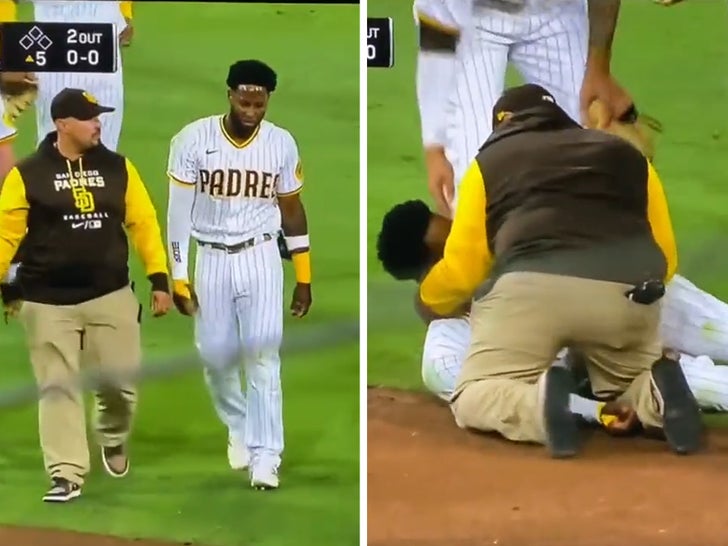 11:45 AM PT — The Padres say Profar suffered a concussion and a neck strain in the horrifying incident … but, thankfully, they added he’s out of the hospital and now resting.

No timeline for a return to the diamond has been given.

Terrifying moment on the baseball diamond Thursday night … Padres outfielder Jurickson Profar collapsed following a scary collision with a teammate, and needed to be taken to the hospital.

The tense scene all happened in the fifth inning of San Diego’s game against the Giants at Petco Park, when Profar was attempting to make a catch on a pop fly in left field.

As the 29-year-old was racing in to snag the ball, shortstop C.J. Abrams was sprinting out to nab it as well — and the two crashed into each other with force.

Replays of the collision show Abrams’ knee connected squarely with Profar’s jaw … sending the two straight to the ground.

Somehow, both guys got up — but, horrifyingly, Profar collapsed after walking just a few steps, and appeared to lose consciousness.

Trainers raced to his side, and eventually, he was strapped to a stretcher and taken off the field. He was able to wave to fans as he left the diamond.

The Padres said Profar was ultimately taken to a nearby hospital, where it appears he stayed overnight. The team has yet to provide any further updates on his health.

Abrams, meanwhile, was able to stay in the game, which the Padres ended up winning, 2-1.