New York Times Stock Is Down 16% Year to Date, What's That About?

New York Times Stock Is Down 16% Year to Date, What’s That About?

Since an upward spike after the Jan. 6 insurrection, the stock has been sinking

The New York Times’ stock has fallen 16% year-to-date. At close of market on Friday it stood at $40.92, dropping steadily, stone-like, from a spike in March of this year.

What’s driving this decline? And is media analysts’ stated goal of hitting $57 per share by December 2021 still possible?

Let’s back up. A year ago, when Donald Trump was still in office and the pandemic was raging, New York Times stock was at $43.10. It stayed in that range until just after the election, when after a brief dip the price started inching up. In early January, it hit a high of $52.01 and since then, it’s been fluctuating in the high $40s to lower $50s. That is, until this spring, mid-April to be exact, when the stock started a steady, downward march. That takes us to the year-to-date loss of 16%.

At the end of May 2020, when the price was $43.59, stock analysts for J.P. Morgan tried to answer the question of what caused the decline, writing a report with their findings after New York Times Company president and CEO Meredith Kopit Levien presented at the J.P. Morgan Global Technology, Media and Communications Conference. TheWrap reviewed a copy of that report and one other from earlier in May.

“News cycle has slowed down but underlying drivers of the business remain intact,” the report said, which reviewed Levien’s presentation. “Management reiterated there is no change in the longer term outlook for subscriber growth. Even though the news cycle has slowed down, NYT continued to make investments to meet the demand for news when the next big story breaks.”

Here’s what we know from the Times’ most recent earnings call: At the end of Q1 this year, subscribers topped 7.8 million. In that quarter, the Times added only 301,000 new subscribers, the lowest number since Q3 2019, though the company’s leaders still expressed optimism that the paper was on track to have 10 million subscribers by 2025 and noted its profit margins had continued to rise.

In the report, weaker subscriber growth was chalked up to former President Donald Trump leaving office and President Joe Biden taking over, as well as “waning interest in the pandemic.” Gary Kaltbaum, president of Kaltbaum Capital Management and host of the nationally-syndicated radio show “Investor’s Edge,” agreed with that assessment, telling TheWrap that though his opinion might be unpopular, he thinks a lack of Trump-related news has affected not only the Times, but other major media outlets.

“[On CNN], ratings are way down,” he said by way of example, and he’s right. “Whether you loved Trump or absolutely hated him, one must believe he really moved the dial. This one is a guess but I think a good guess.”

Overall, the report reviewed by TheWrap claimed “management is more optimistic about its outlook” on digital advertising “given NYT’s increasingly compelling proposition to advertisers with 100 million registered users and products based on first party data.”

In a separate report earlier in May, when the price was $44.85, the same J.P. Morgan analysts said, “We continue to like the story longer term given the success the company’s migration to digital, with growth in circulation cushioning ad declines,” before adding, “Despite a moderation from a record 2020, our conviction level in a robust longer-term subscriber goal has only increased. Shares may take a bit of a pause until trends in 2021 improve following a seasonally slower Q2, but we see improvements in ARPU and profitability along with still ongoing healthy sub growth as catalysts to shares.”

Kaltbaum wasn’t eager to count the Times out, either: “The stock had a great run,” he reminded TheWrap. “It was $12 when Trump got elected.” 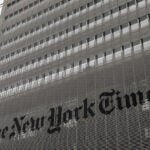