Michael Strahan was left wondering where the time had gone when he revisited some old photos for a heartfelt reason.

The star took to Instagram and shared two snapshots of his beloved pet pooch, Enzo, and fans were left cooing.

Michael posted one photo of the dog as a tiny puppy and another of the bundle of fluff today. Both images were adorable and sparked quite the response from his followers.

“Enzo then and now!! Where did the time go??” he captioned the post. “He is so adorable and cute, just like you Michael adorable and cute,” wrote one fan while another added: “Sweet & Cute, then & now…Your best companion Michael Strahan,” and a third said: “Enzo is just the cutest ever.”

Time does seem to be flying by as the father-of-four is also watching his children grow up fast.

His youngest daughters, twins Isabella and Sophia, are 17 years old and taking the modeling world by storm.

They recently stormed the runway for swimwear brand KB Swim and certainly made an impact.
Isabella shared one of the professional Getty photos on Instagram and captioned it: “@shopkbswim takes on Miami.”

She wore the all-white number while her sister donned a black two-piece with white trim.

MORE: Michael Strahan’s office inside New York home is so unexpected – see inside

It’s not their first modeling gig, however, Isabella – who is also proving to be a talented volleyball player – made her runway debut in a show-stopping bridal gown earlier this year. 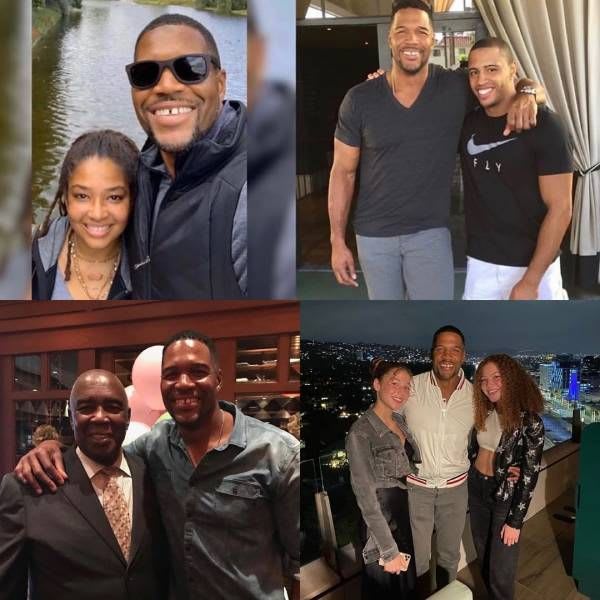 Michael posted a video of the moment and wrote: “Very proud of you, @isabellastrahan, for crushing your first runway this weekend for @sherrihill!!!!

“As a parent, there is nothing like watching your child succeed at what they love with a smile on their face! #ProudDad #GirlDad.”

Michael has two grown children too, Michael Jr. and Tanita, and adores being a father.