So much for Lamar Odom‘s latest go at love. His now former fiancee Sabrina Parr has announced that they are no longer engaged. The personal trainer made revelation in an Instagram story on Nov. 4, writing that she had made the “difficult decision” to split from him, saying that it was the “best for myself and my children.” Sabrina went on to say that “Lamar has some things that he alone has to work through,” and that she is “no longer able to be by his side while he seeks the help he so desperately needs.” HollywoodLife.com has reached out to Sabrina and Lamar’s reps about the split. 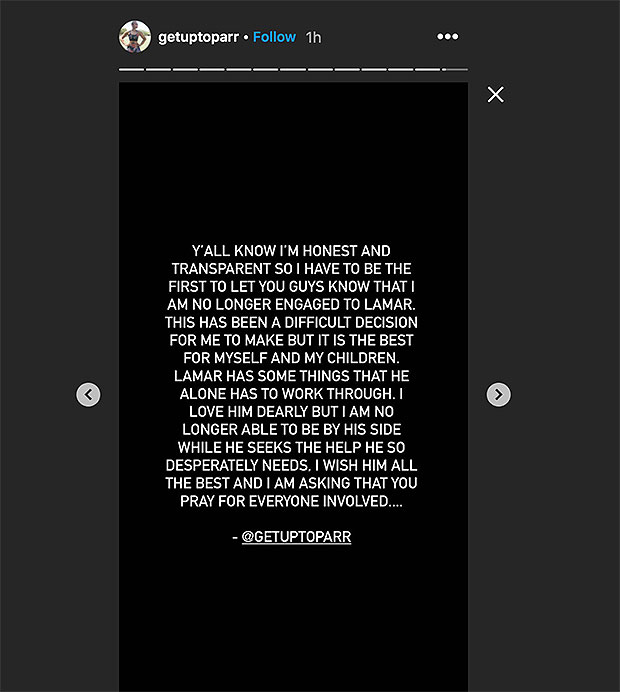 The couple began dating in Aug. 2019, and the former Los Angeles Lakers star popped the question nearly one year ago on Nov. 11, 2019 after just four months super PDA filled dating. Their romance moved at warp speed, as he first announced they were dating with an Aug. 2, 2019 Instagram pic of Sabrina sitting on his lap with the caption, “What we have is much more than they can see… @getuptoparr.”

Just a week later Lamar was already publicly proclaiming his love, posting an Aug. 9 IG photo of the pair on a hike. He was holding and kissing Sabrina while she wrapped her legs around his waist. Lamar then wrote, “I never thought I’d feel this way again… love you queen” next to the picture.

Lamar announced their whirlwind engagement via an Instagram post where Sabrina had her arms wrapped around the former NBA player with her huge diamond ring on full display. He wrote in the caption, “Introducing my new fiancé!! Soon to be Mrs. Parr-Odom. She the ONE!!!!” The health and life coach was equally thrilled, as she posted a slide show of photos from the proposal, as well as a video that showed a closer looked at the large pear-shaped diamond. “I SAID YES!!!!!” Sabrina announced along with a diamond ring emoji.