LadBaby dismisses hype around odds for fourth Christmas No 1

Welcome to Metro.co.uk‘s The Big Questions, where we ask, well, the big questions (and the smaller ones too) and this week, we’re diving deep with LadBaby’s Mark Hoyle, who is on track to win a record-breaking fourth Christmas number one in a row.

Yesterday Ladbaby and Ladbaby Mum Roxanne released their festive track Sausage Rolls For Everyone alongside Ed Sheeran and Sir Elton John, in a spin on their Christmas song Merry Christmas.

Mark will tell you not to believe what the bookies are saying, with predictions placing his hit at the top to take out the title yet again, but odds are he’s going to be helping raise a whole lot more for foodbank charity, The Trussell Trust whether he comes out on top or not.

Here we chat all things festive, sausage rolls, and why Greggs hasn’t given him a black card…yet.

Oh, and if you need to catch up on all the glorious chats we’ve had with stars including James Arthur and Katherine Ryan, read them here.

Congratulations on the new Christmas song, Sausage Rolls For Everyone – you’re on track for another number one…

Don’t believe the bookies, though they always get it wrong, don’t they! You never know.

You spoke to us not too long ago, giving nothing away about another potential Christmas song and here you go, you’ve dropped the song

I felt terrible! I knew we were doing it but I couldn’t tell you, [I had to say] “Ohhh you never know…” and not give it away.

We tried to keep it a secret as long as we could because we wanted to surprise everyone. You don’t want to open your Christmas presents early.

So, we believe the story is Ed Sheeran messaged you after last year’s number one, before you reached out to collaborate earlier this year?

Yeah, last year when we got number one [for Don’t Stop Me Eatin’] he messaged and said congratulations and saw what we were doing for charity, then six months ago, middle of summer, we were talking to The Trussell Trust and we were hearing about the effects the pandemic has had on food banks, we said let’s try one more time, let’s make the song bigger and raise even more money.

I asked if there was a world Ed would join in, and he replied immediately and said he’d love to, but he’d already started writing a song with Elton John, so were we interested joining with him and Elton. Obviously, we said yes.

The odds on them getting number one must be decent! Their song raises money for their respective charities, our song raises it for Trussell Trust, I think that’s what’s lovely about this time of year, raising money for so many incredible causes. 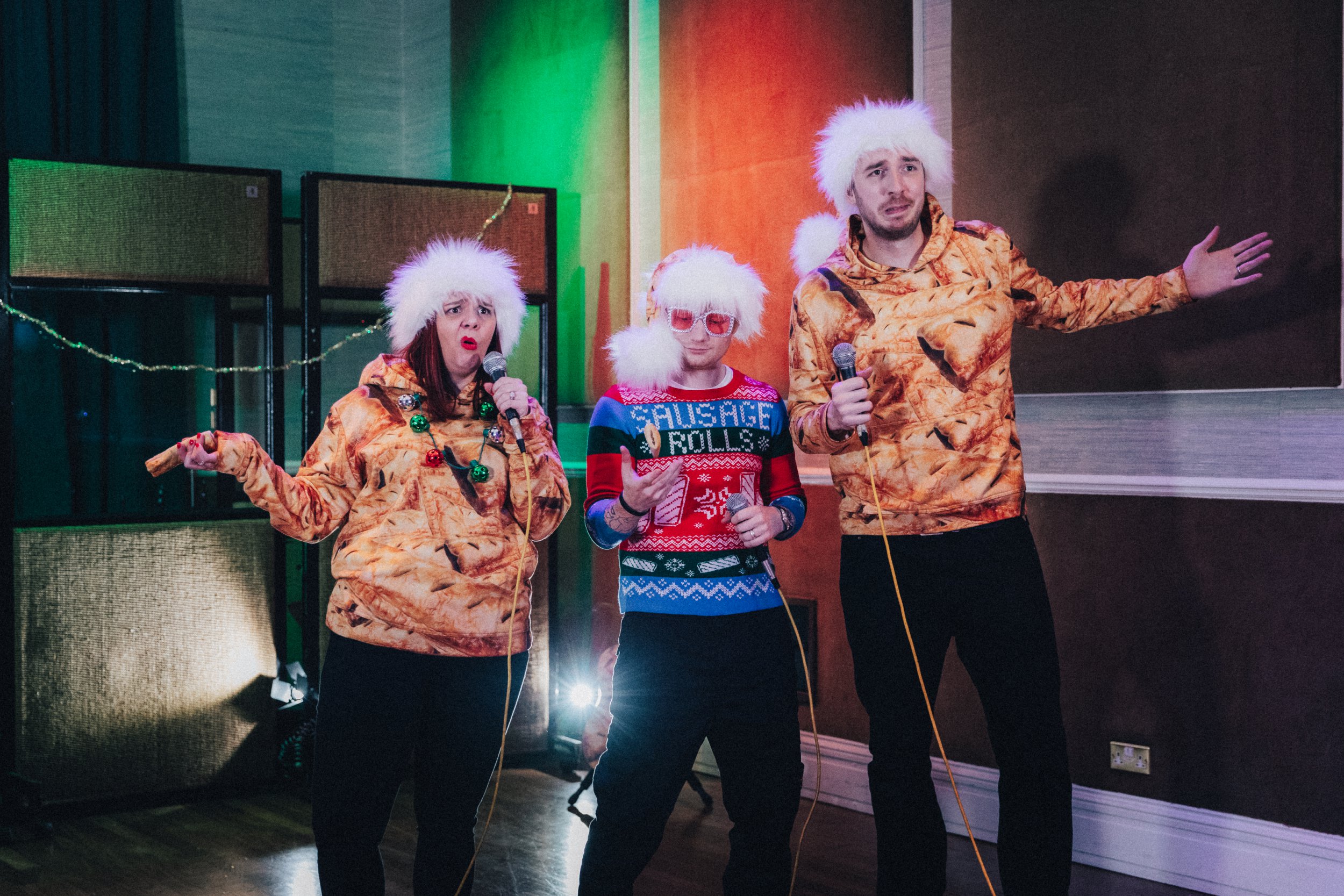 Do you know how much you’ve helped raise so far?

Last year we partnered with Walkers Crisps as well, if you include that, we’ve also worked with Weetabix, I think, all in all, it’s over £1.2 million. It’s lovely we’ve been able to do that, it’s an honour.

You’ve been so open about your own struggle with money in the past, and while your songs are fun, how important is it for you to get those messages across?

I think that’s what we try to do in general with our social media, we want LadBaby to be a place that makes people feel good and a positive environment all year round. Make everyone laugh, at least for five minutes a week. With everything we do, we find a way to give back.

Combined, we have over 12 million followers, so let’s use it for families who need it most. We know what it’s like when you’re worrying about putting food on the table and paying for bills. It’s nice to do something good like this and put a smile on people’s faces.

Recently George Clooney said he turned down something like $35million for a job that didn’t align with his brand. Have you turned down collabs in the past because it didn’t link up?

I’ve never turned down one for $35million [laughs].

Me and Rox turn down more than we take. We’re very conscious we have a family channel and we’re aware of the impact… lots of young families, teenagers and children watch our content and we have to set a good example. We’ve had a lot of betting companies that have wanted to work with us, we’re mindful that’s not something we want to promote on our channel. It’s lucky we’re in a position we feel comfortable turning down things that aren’t going to set the right example.

What has been your pinch-me moment?

You know what, Ed and Elton is up there. When we filmed with Elton, we took him the lyrics me and Rox had written. He was so sweet and polite…he went into the sound room to record his vocals and we were in the booth, it was this really surreal moment where it sounded like Elton John, and it was quite emotional. I was welling up, “Oh my god, that’s Elton John, I can hear his voice, I’m in the same room”. Especially as it was such ridiculous lines, him singing about sausage rolls and belting it out in an Elton John voice.

We have to ask, how does one hand lyrics over to Elton John and Ed Sheeran?

They sent us their song, we spent about four weeks writing the song, [then handed it back to] one of the best songwriters of all time, “oh Ed what do you think of this song me and Rox have written in our living room?” I think he changed maybe two lines out of the whole song.

It’s another surreal moment, he almost approves it and goes, “do you want to sing it with me?”. My voice is built for the football terrace, but if you want me to sing with you, I’ll do it.

Do you have one of the black cards with Greggs, like Nandos have?

Don’t even get me started. When we met Ed, Ed has a Nandos black card, he showed me it, I was starstruck by the black card more than him! It looked so cool.

He said to me, you must have a Greggs one. No. The only person who’s got one, as the rumours have it, is Stormzy.

Greggs have never wanted to work with us, they’ve never reached out. I don’t know what I’ve done to upset Greggs.

What more do you have to do?

I’ve name-checked them in two songs! They probably know they can’t give me one because it’ll cost them too much. They’ll go under within a week.

Do you have a bucket list of people to collaborate with?

I would record a song with absolutely anyone, as long as we can have a load of fun doing it and raise a load of money I’m up for it.

Ronan [Keating] last year was such a legend, he came straight in, sung something that’s so silly, so beautifully. I’ll always be a Ronan Keating fan for that.

Will we see you and Rox going live in your living room when the results come in?

No matter where we finish in the charts, we’ll go live with everyone. It’s a special moment we like to share. I always say it’s not really us going for number one, it’s everyone. We only get there because people support us. When those momentous moments happen, we want to be there with everyone, being a part of it, without everyone buying it we wouldn’t be there.

With Die Hard on in the background

With Die Hard playing loudly in the background!