Keeping it 100! Kourtney Kardashian fired back at claims that she is changing amid her relationship with Travis Barker.

The Keeping Up With the Kardashians star, 42, posted a photo of herself at a bar on Instagram on Sunday, May 23, and her wardrobe choice caused some fans to do a double take. After one user commented, “And her style begins to change,” seemingly hinting that her new man is altering her fashion sense, Kardashian quickly shut down any such thoughts.

“This picture is from 2019 but OK,” she replied with a kissy face emoji.

The Poosh founder wore torn jeans, black shoes, a gold silk top and camel coat with fur accents in the snap. She topped off the look with big sunglasses and a black lip as she stood at a bar with a drink beside her. 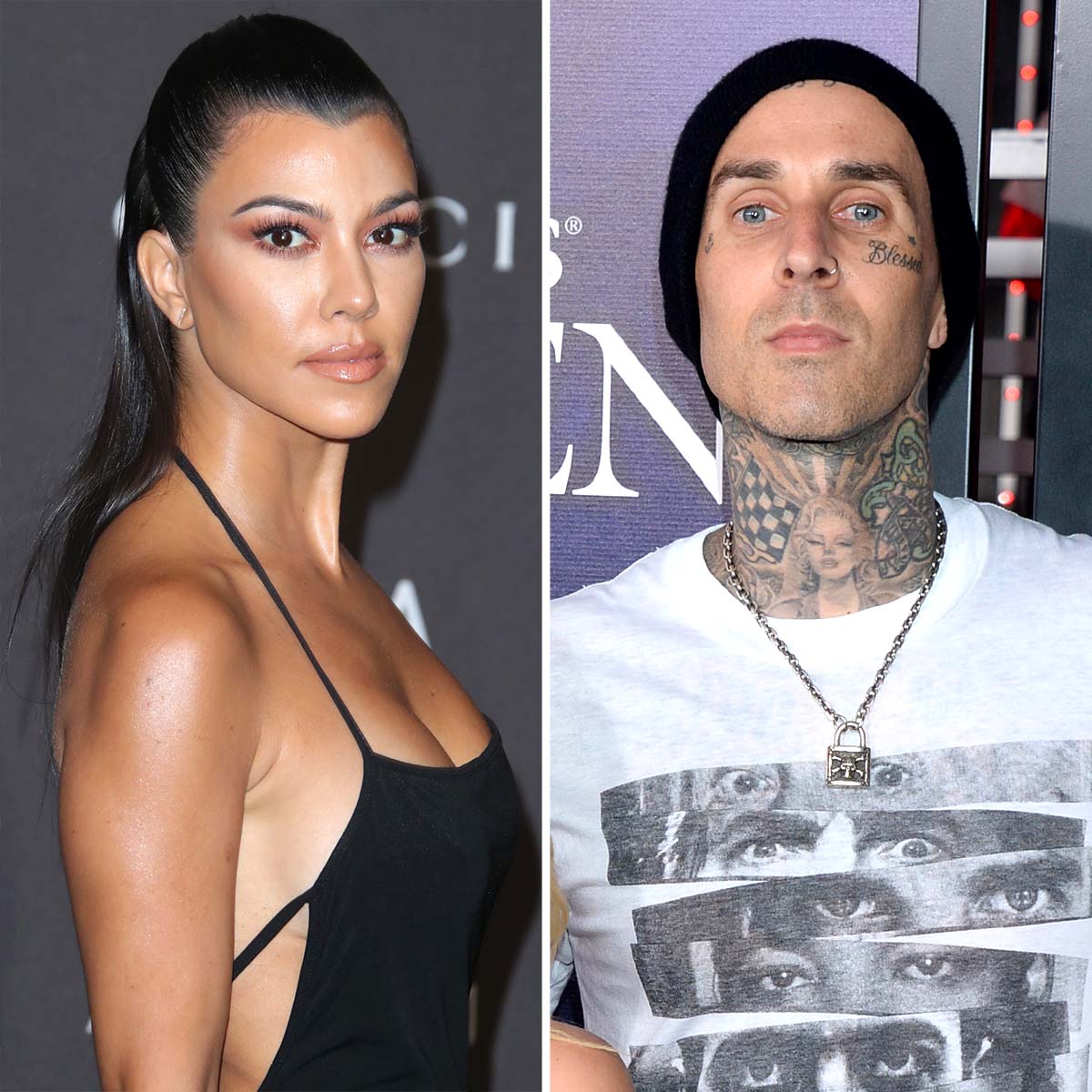 “Feeling left out, send me over a @drink818 on the rocks with lime,” Kardashian captioned the photo, which was accompanied by two other snaps of sister Kendall Jenner’s new 818 tequila at what appeared to be a home bar.

The series of photos came two days after Jenner, 25, celebrated the launch of her new alcohol brand with a star-studded party in Los Angeles. The mother of three was the only one of her sisters who missed the bash, which is seemingly why she posted the FOMO photos on Sunday.

Kim Kardashian, Khloé Kardashian and Kylie Jenner all shared moments from the A-list party on social media over the weekend and posed for a group shot.

Kourtney, for her part, has been spending a lot of time with her boyfriend, whom she has been dating since late 2020. Us Weekly confirmed in January that the pair were officially together after being friends for years.

“Travis is very smitten with Kourtney and has been for a while,” a source told Us at the time.

The couple became Instagram official the following month while celebrating their first Valentine’s Day together. The duo have continued to put their love on display ever since, including multiple PDA-filled outings. 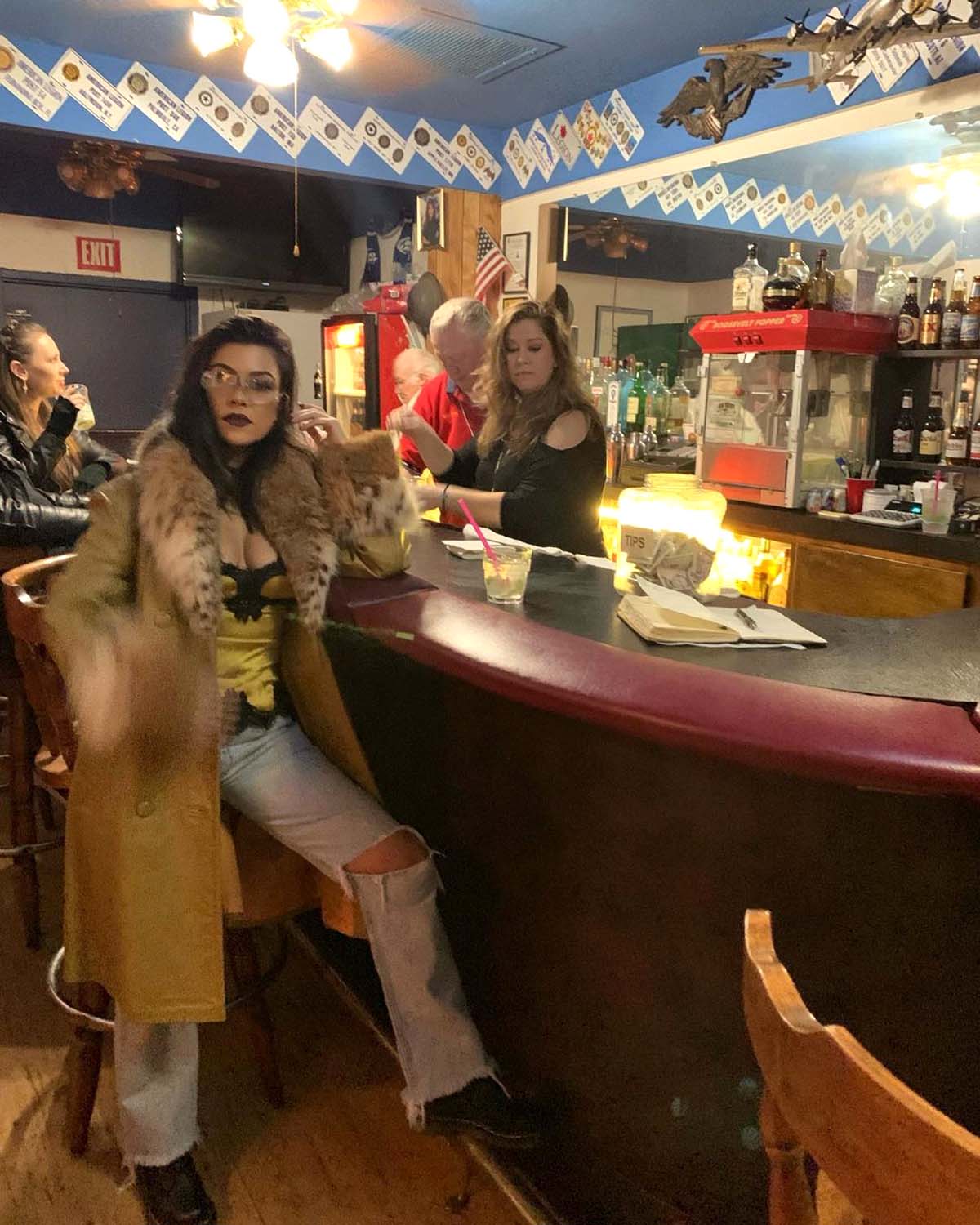 The Blink-182 drummer, 45, gushed over his love on her birthday last month, sharing sexy snaps of the birthday girl. “You’re a blessing to this world,” he captioned the photos in April.

Later that month the duo jetted off to the desert and posted sexy snaps from their trip on Instagram. The pair “love getting out of L.A. and being with their families in the Utah environment,” a source told Us after the getaway, noting that friends of the lovebirds “absolutely” think they will get engaged.

Earlier this month, the TV personality and the musician faced a bump in their relationship with Barker’s ex-wife, Shanna Moakler, claimed that he hooked up with Kourtney’s sister Kim, 40, in the early 2000s when they were still married.

Moakler, 46, exclusively told Us on Tuesday, May 18 that she “caught” the drummer having an “affair” with the KKW Beauty founder after meeting her through Paris Hilton. She claimed she signed the divorce papers because of his infidelity.

Barker, for his part, previously spoke about his relationship with Kim in his 2015 memoir, Can I Say: Living Large, Cheating Death and Drums, Drums, Drums, insisting that he looked but “never touched” the Skims founder.

Moakler, who was married to Barker for four years before their 2008 divorce, told Us on Tuesday that her ex is “100 percent” lying about not hooking up with Kim. “Someone sent me all their [text] conversations and I’m also close friends with people who were there, while things were happening,” she said.

The former Miss USA, who shares son Landon, 17, and daughter Alabama, 15, with Barker also told Us that the rocker’s relationship with Kourtney is “putting a wedge” between her and the former couple’s kids.

One day later, Kourtney and Barker put on a united front when they went to Disneyland with all of their children for a family fun day. The couple was spotted holding hands as they walked through the park in between going on rides with their kids.

Barker’s teenagers were with them throughout the outing as were Kourtney’s sons, Mason, 11, and Reign, 6, and daughter Penelope, 8, whom she shares with ex Scott Disick.