GWANGJU, South Korea — After she earned her fourth gold medal of the 2016 Olympics, Katie Ledecky said her motivation moving forward would come from knowing that somewhere in the world a young swimmer was training hard to one day unseat her.

Three years later, the challenger that Ledecky had envisioned became all too real during the first night of finals in the swimming portion of the FINA World Championships. Ariarne Titmus, 18, of Australia, handed Ledecky her first-ever defeat in a major international competition in the 400-meter freestyle.

[email protected] wins the silver medal and suffers her first loss in a major international 400m freestyle at #FINAGwangju2019. pic.twitter.com/DBdCpwFIFa

Ledecky, 22, last lost a race at this distance at a glorified short-course meters exhibition duel meet between European and U.S. all-stars in Glasgow in 2013. She was feverish then. On Sunday, Ledecky, a 14-time world champion, offered no excuses.

“I knew it was going to be a tough race,” said Ledecky, adding that Titmus had produced “such a good swim.”

Titmus, 18, who has been steadily gaining on Ledecky since 2017, pulled off the epic upset by reeling in Ledecky on the final lap. Titmus covered the final 50 meters 1.83 seconds faster than Ledecky, whose split of 31.4 was the second-slowest closing lap in the eight-woman field.

“I just got to the last turn and felt like I just tightened up,” said Ledecky, who finished well off her world record of 3:56.46, which she set at the 2016 Olympics.

“I expected to be a lot faster tonight,” she added.

Ledecky typically leads from the start, so the Nambu University Municipal Aquatics Center crowd in Gwangju, South Korea, was abuzz when Titmus set the pace for the first 200 meters. Ledecky made her move on the fifth lap, and with 75 meters remaining, she held a lead of half a bodylength. 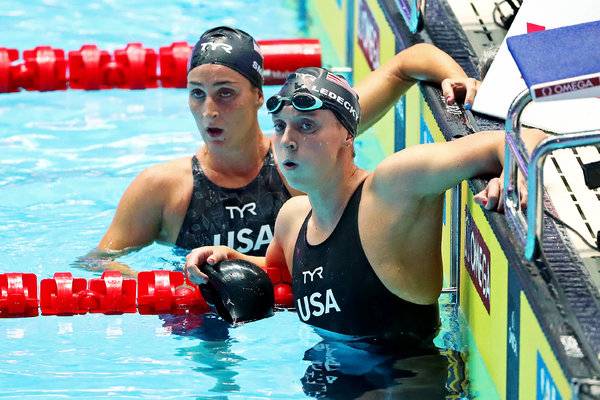 Greg Meehan, the U.S. women’s head coach and Ledecky’s personal coach for the past three years, said he had seen nothing to think her fourth consecutive World Championship title in the event was in jeopardy.

“I think she swam a beautiful first 300, just really executed the plan,” said Meehan, who had no explanation for why Ledecky struggled on the final lap. “Sometimes things just happen,” he said, “and it’s hard when it’s someone of Katie’s persona.”

Titmus, too, seemed surprised that Ledecky was close enough to catch down the stretch. She had finished fourth, six seconds behind Ledecky, at the 2017 World Championships in Budapest and second to her, by 1.16 seconds, at the 2018 Pan Pacific Championships in Tokyo.

“I never thought I’d find myself in a situation where I’d be mowing Katie down,” said Titmus, whose best time coming into the meet was a 3:59.35. “She’s such a champion. I didn’t think I’d be in that situation so I tried to make the most of it.”

Ledecky acknowledged that she is not used to having to ward off a late challenge. Her fastest time in 2019 of 3:59.28, from a meet last month in Santa Clara, Calif., was four and a half seconds better than the next-fastest American, Smith. At the past two World Championships, Ledecky’s average margin of victory in the event was 3.5 seconds.

Ledecky looked shellshocked during the medal ceremony. She recovered her equanimity in time to nudge Titmus in the right direction for the medals parade around the pool deck.

“Obviously this stings a little,” Ledecky said, adding, “I need to rebound from this and I need to get my fight back.”

She won’t have long to lick her wounds. Ledecky will return to the water Monday for the preliminaries of the 1500-meter freestyle, where she is the three-time defending champion. She remains undefeated, to this point, in the 800- and 1500-meter finals in major international competition.

“The expectations every time she races are pretty significant,” Meehan said, adding, “I’m confident she’s going to come back tomorrow and be good.”