Jim Bouton Opened Up the Major Leagues to Everyone

In high school they called him Warm-Up, because he only ever pitched in the bullpen. He was an unknown, this Jim Bouton, having just moved to Illinois from New Jersey. He loved the game, sure. But that didn’t mean they had to let him pitch.

It was the same way on his summer-league team, until one day when it rained. Bouton went down to the field and raked the water off the dirt and the dugouts. The coach was impressed by how much he cared, and told him he could pitch in a scrimmage.

“The next day I pitched and we won the game,” Bouton said a few years ago. “I became one of the best American Legion pitchers in Cook County. I was on my way. I always tell people, ‘Rake the field.’ I don’t think I ever would have made it.”

Bouton would pitch for 10 seasons in the majors, with 64 wins and 64 losses including the World Series. He was, perhaps, the most influential average pitcher in major league history, because of the gift he gave to everyone who loved the game: the assurance that you, too, belong.

He wrote “Ball Four,” his diary of the 1969 season that showed the humor and humanity of big league players in a way no player ever had. He died on Wednesday at age 80, after a long struggle with vascular dementia.

Two years ago, Bouton’s wife, Paula Kurman, invited me to their home in the Berkshires to write about the turn his life had taken because of the disease. We talked for an hour on their screened-in porch, where sometimes the clouds rolled right through. We ate lunch — homemade pasta with pesto sauce and tomatoes — with Rainier cherries for dessert.

“He’s still the same sweet guy,” Kurman told me. “He still wants to be helpful. He ritualizes what he does so that he can retain it and do it, and he’s pleased to do it.

“He’s fascinated by the news, so we spend a great deal of time focusing on what’s happening. There was a time he was interested in running for office; not on my watch. We live in paradise. We have friends. We don’t play Scrabble anymore.

“Life is when you open your eyes in the morning and you still see things and you know you’re alive and you get up and have breakfast and your day unfolds. Life is made up of the small things, and the small things have value — the connections to others, the grandchildren.”

Pitching was a way to connect. Bouton could still do that, and do it well. Usually he threw against a stone wall he built in a corner of his backyard. When I mentioned that I keep a glove in the trunk of my car, he asked if I wanted to play catch — all knuckleballs. Bouton threw with an unusual grip, digging three fingernails, not two, into the leather just above the seams. I tried it, and it really did work. 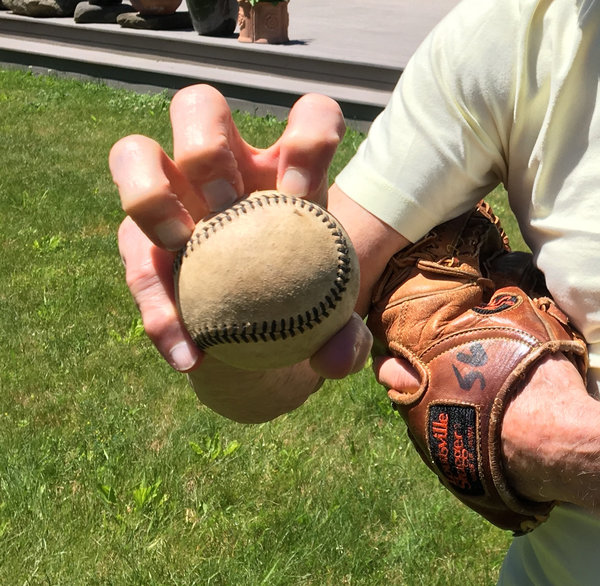 I had first talked to Bouton 25 years earlier, in 1992, when I was a teenager and had just read “Ball Four” for the first time. I was an aspiring sportswriter but also a frustrated high school pitcher — a warm-up guy. When I read his book, Bouton seemed like a friend. It was good to know there was someone like him out there.

“I don’t think any teenager feels comfortable in his group,” he told me then, when I mentioned how deeply I connected with the book. “You’re trying to figure out how the world works: ‘How do you get from here to there, who am I and how do I fit into things and what the hell am I going to do with my life? I don’t have any answers.’ And so to read a book by a guy who’s in the same situation, who’s 30 years old, they have to say to themselves, ‘Hey, it’s O.K. to be on the outside.’”

Bouton found his way to the inside through his success with the Yankees. He won 21 games in 1963 and 18 the next year, plus two more in the 1964 World Series. He threw so hard that his cap always fell off his head.

But success did not last, and by 1966 he was barely hanging on. He turned to the knuckleball, a pitch he learned as a young New York Giants fan. In 2015, he told me how he developed it:

“I learned the knuckleball when I was about 12 years old and there was a cereal box with a picture of Dutch Leonard on it,” Bouton said, referring to a Washington Senators All-Star from the 1940s. “It explained on the back of the box that the trick was not to throw it with your knuckles. The idea was that you really need to throw it with your fingertips, without any spin.”

It seemed like an impossible task, and it confounded Bouton. But, determined to master the pitch, he kept at it.

“And I threw it for about, I don’t know, 10 days, a half an hour a day or something,” Bouton said. “My brother Bob is a very patient catcher and brother, and one day I threw the ball and released it perfectly. It moved straight — you could see the writing on there — and the ball was not spinning. So my brother reaches up to catch it, and just as he does, belt high, just before the ball lands in Bob’s glove, it plummets down and hits him in the kneecap!

“And Bob’s down on the ground moaning: ‘Oh! What a great pitch!’ I had maimed my brother, and he was thrilled!”

Bouton used that knuckleball in 1969 with the expansion Seattle Pilots and the Houston Astros. All season long, he jotted down thoughts and stories whenever inspiration struck — on airsickness bags, dry-cleaning bills, hotel stationery, all of it now held at the Library of Congress in Washington.

Teammates were suspicious but figured Bouton’s book would be a typically vanilla account by an athlete, not an open invitation for readers to look behind the sanctified walls of the clubhouse. Ballplayers, Bouton revealed, could be boozing, womanizing, pill-popping, ball-scuffing rascals — overgrown teenagers, that is. But they could also be thoughtful, curious, sensitive and vulnerable.

In other words, they are human beings like the rest of us. Not so scandalous, really.

Baseball players wear costumes and perform amazing feats, but they are not superheroes, and we should not demand that of them. It took a guy like Bouton, flawed but fearless, to say it out loud, and in doing so he brought fans closer to the game than they had ever been before. Your favorite players, it turns out, are often just like you.

Tyler Kepner has been national baseball writer since 2010. He joined The Times in 2000 and covered the Mets for two seasons, then covered the Yankees from 2002 to 2009. @TylerKepner

Elizabeth Banks: Charlies Angels Was Billed as a Feminist Manifesto but I Was Just Making an Action Movie