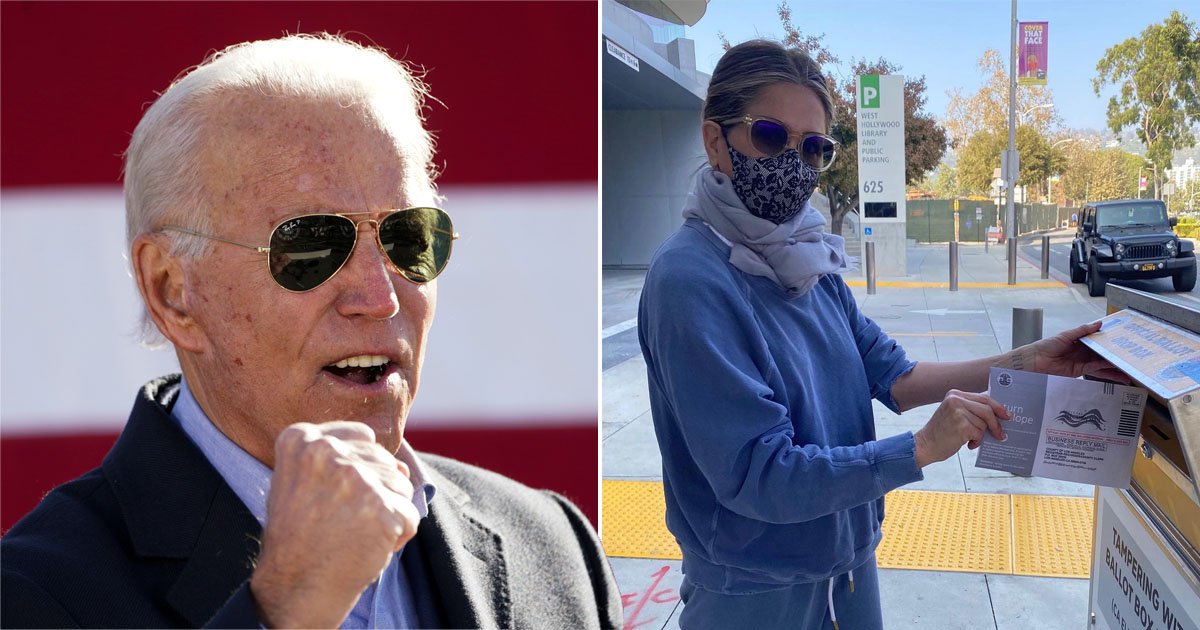 Jennifer Aniston shared a clip of her as Rachel Green from Friends to celebrate Joe Biden winning the US presidential election over Donald Trump.

Aniston shared the results of the election on her Instagram story, following it up with a clip of her as Rachel, excitedly waving her hands in the air.

She also shared a snap of Joe Biden and Kamala Harris, saying it was ‘about time’ the pair were elected into office.

It comes after the actress shared a photo of her posting her vote as she encouraged people not to waste their vote on Kanye West.

She wrote: ‘#IVOTED for @joebiden and @kamalaharris. I dropped my ballot off, and I did it early.

‘I voted for them because right now this country is more divided than ever. Right now, a few men in power are deciding what women can and can’t do with their own bodies.

‘Our current President has decided that racism is a non-issue. He has repeatedly and publicly ignored science… too many people have died.’

She had encouraged others to vote for Biden, adding: ‘I urge you to really consider who is going to be most affected by this election if we stay on the track we’re on right now… your daughters, the LGBTQ+ community, our Black brothers and sisters, the elderly with health conditions, and your future kids and grandkids (who will be tasked with saving a planet that our leadership refuses to believe is hurting). ⠀
⠀
‘This whole thing isn’t about one candidate or one single issue, it’s about the future of this country and of the world. Vote for equal human rights, for love, and for decency.

‘PS – It’s not funny to vote for Kanye. I don’t know how else to say it. Please be responsible.’

It was announced on Saturday that Biden had beaten Donald Trump and will be inaugurated as the 46th president of the United States in January.

MORE : Little Mix: The Search: Leigh-Anne Pinnock in tears as she praises girlband Nostalia over diversity

MORE : Lizzo lets tears flow as she celebrates Joe Biden’s US election win in passionate video: ‘That man didn’t care about you’