‘If You Don’t Have It, You’re Behind’: College Baseball’s Tech Arms Race

OMAHA — Kumar Rocker arrived on Vanderbilt’s campus last fall as one of the most heralded freshman pitching recruits in the country. A tall, strapping right-hander, Rocker relied heavily on a fastball and a looping breaking pitch that dropped straight down.

The Vanderbilt pitching coach Scott Brown thought Rocker needed another breaking pitch, one with sharper, more diagonal movement. For decades, there was only one way to teach a new pitch to a player like Rocker: A coach demonstrated a grip and release, and then waited weeks, months, maybe even a season or longer for the player to master it.

But Vanderbilt is among the programs at the forefront of the technological revolution that has trickled down to the college level from Major League Baseball. It is one of at least four college programs with a pitching lab, stocked with the same technology the big leaguers use: Rapsodo pitch-tracking devices and Edgertronic high-speed video cameras.

By spring ball, Rocker had developed a breaking pitch that darts down and away from right-handed batters but looks like his other pitches do when leaving his hand. This month Rocker struck out 19 batters — many on breaking pitches — while no-hitting Duke in the N.C.A.A. Super Regionals, the eighth no-hitter in N.C.A.A. Tournament play and the first by a Commodores pitcher since 1971.

That victory helped the Commodores reach their fourth College World Series since 2011 and ultimately earn a berth in the finals, where they lost Game 1, 7-4, to Michigan. Game 2 of the best-of-three series is Tuesday night at TD Ameritrade Park in Omaha. 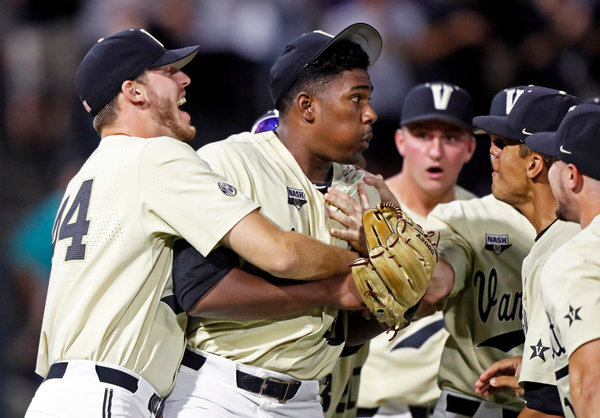 Technology is not the only reason Vanderbilt succeeds. Talent helps. In this month’s M.L.B. amateur draft, 13 Commodores were chosen, joining Rocker and two others who were drafted out of high school but did not sign. But tech is the newest recruiting tool in Division I, the latest separator between haves and have-nots. Six of the eight schools that reached the College World Series — all but Louisville and Texas Tech — said they had purchased high-end analytic devices in the last two years.

“It’s become almost like an arms race in technology,” said Brandon Barak, Vanderbilt’s director of player development and a former minor league video coordinator for the Toronto Blue Jays. “It’s getting to the point where if you don’t have it, you’re behind.”

Most major-conference teams have invested in TrackMan, the radar system used by M.L.B.’s Statcast, or similar devices to collect basic data on hit and pitched balls in their stadiums. That data may be shared with opponents. The N.C.A.A., though, prohibits data collection during postseason games.

When it comes to player development, virtually all major league teams utilize Rapsodo tracking or similar devices, which measure the angle, spin and break of pitches. About half own Edgertronic cameras, which capture imperceptible differences in hand position and release points, according to officials with both companies.

The Michigan pitching coach Chris Fetter, a former minor league pitching coordinator for the Los Angeles Dodgers, said the Wolverines lacked even a rudimentary data system when he came to Ann Arbor in 2018. Now, he said, Michigan employs the same tools as the Dodgers. It may not be a coincidence that this season the Wolverines reached their first College World Series in 35 years, since the 1984 squad led by the future Hall of Famer Barry Larkin.

“There’s definitely something to that,” Fetter said. “But for us, it’s not the be-all and end-all. Technology will never measure what’s in a guy’s chest or what’s in between his ears. But at the same time, it’s an added piece that can tip the scales in our favor.”

None of these devices is cheap, which can be an issue in a sport with limited revenues. The newest Rapsodo models, which are used by hundreds of programs, run from $4,000 to $4,500. Edgertronic cameras are less widespread and more expensive, from $6,495 on the low end to $15,990 for the top-of-the-line SC2x model that records at 20,000 frames per second.

Vanderbilt Coach Tim Corbin said the school’s Champions Circle booster club bought Rapsodo and Edgertronic devices for the program. Such generosity is not unusual around Vanderbilt baseball: Three years ago a $2.5 million gift from Boston Red Sox pitcher David Price, once a Commodores standout, headlined a $12 million campaign to upgrade the baseball facilities. Former players contributed more than 60 percent of the total.

At Michigan, Fetter said the cost of the devices came out of the baseball budget, with payments spread over several years. “I know it can be cost-prohibitive for some schools,” Fetter said. “We’re fortunate to be at a place where student-athlete welfare and developing our players not only while they’re in college but to be professionals is a high priority.”

Louisville reached its fourth College World Series in seven years using only TrackMan, installed this year. Michael Allman, the director of player development, said the Cardinals were considering Rapsodo and Edgertronic purchases, though he shudders at the cost.

Vanderbilt’s pitching lab gives it an additional advantage over most other schools. It was established in the drab basement of the football stadium by the former pitching coach Derek Johnson, now a coach for the Cincinnati Reds. Johnson mentored Price and eight other first-round draft choices before leaving in 2012 for the Chicago Cubs organization; Brown, his successor, has developed five more first-rounders.

“Anything we believe can help our pitchers have a leg up and give us a better chance to win, we want to implement it,” Brown said.

Brown’s connection with Driveline, a baseball performance training center outside of Seattle that is heavy into biomechanics and technology, also proved helpful. Brown and the Driveline founder Kyle Boddy are friends, and in 2016 Boddy urged Brown to test a pitching data prototype from Rapsodo, then a tech start-up. The Rapsodo website lists Boddy and Brown on its baseball advisory panel.

“Brownie was with us from the beginning,” Art Chou, the general manager of Rapsodo, said in a telephone interview.

Technology, however, can ultimately only do so much. Tech-savvy Arkansas was the first team eliminated from the College World Series, losing twice by one run, and the relatively tech-light Louisville and Texas Tech were eliminated by the eventual finalists. Some teams are still trying to grasp the best way to use data.

Vanderbilt, meanwhile, is already looking at the next step — virtual reality scouting. In a hotel meeting room last week, Barak said, Commodore batters viewed enhanced video of the next day’s pitcher through an interactive simulator developed by WIN Reality, a tech company founded by Dan O’Dowd, the former Colorado Rockies general manager, and his son Chris. It replicates the pitcher’s delivery, pitch velocity and movement as if facing him live. The Mets bought the same technology a few months ago.

“The old-school way of just studying film, that’s going to be gone in probably three to five years,” Barak said. “This is going to be everything.”