You might not expect to hear Ivanka Trump and Amber Tamblyn’s names in the same sentence, seeing as the two women have seemingly never crossed paths in their lives. However, the Hollywood star has certainly made her feelings about Ivanka’s father Donald Trump clear in the past. Tamblyn performed the 90’s pop hit “I Wanna Sex You Up” on “Lip Sync Battle” dressed up as the then-GOP Presidential nominee in 2016. While that performance was all apparently just for fun, Tamblyn has also shared painful details brought to light during the former president’s first campaign.

Tamblyn opened up about a sexual assault encounter she experienced after Donald made headlines for a 2005 leaked tape, in which he was heard making lewd comments about women. After describing the way her ex-boyfriend assaulted her at an encounter, Amber wrote on Instagram (via People), “That part of my body, which the current Presidential Nominee of the United States Donald Trump recently described as something he’d like to grab a woman by, was bruised from my ex-boyfriend’s violence for at least the next week.” Ivanka, meanwhile, made no comments about the tape at the time.

Fast-forward several years later and Amber still has the Trumps on her mind. This time around she used Ivanka as an inspiration for her latest scripted television role. Here’s why.

If you or anyone you know has been a victim of sexual assault, help is available. Visit the Rape, Abuse & Incest National Network website or contact RAINN’s National Helpline at 1-800-656-HOPE (4673). 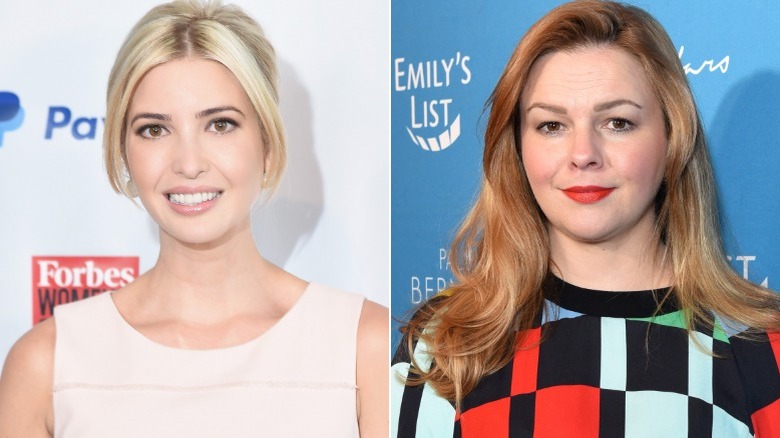 Amber Tamblyn plays Kimberly Campbell Cunningham in the FX on Hulu series, “Y: The Last Man.” In the series, and just like Ivanka Trump, she is the daughter of the President of the United States. She is also a staunch conservative woman whose life revolves around her husband and sons but loses her family in a pandemic. Tamblyn explains that she looked to Trump for inspiration for her character’s mannerisms as Kimberly becomes an “empathetic monster” in later episodes.

Tamblyn says that she spent a lot of time analyzing the former first daughter at political events such as the G-20 Summit for character research. In fact, there is even one clip of Trump trying to mingle with world leaders but is ultimately snubbed by everyone, which Tamblyn found particularly interesting. “There is this very sad way in which she is trying to be heard and to be taken seriously by these leaders, and you can see their faces — you can see that they don’t really take her seriously. And I used that as a frame for Kimberly’s entrance into this world,” the actor told Variety.

Tamblyn also noted that she personally doesn’t identify with “99.9% of what conservative women and their values are,” but that’s why she studied Trump so much for her role. Whether or not Trump tunes in to watch “Y: The Last Man” remains to be seen, but it sounds like a series that might hit a little too close to home.