Products featured are independently selected by our editorial team and we may earn a commission from purchases made from our links; the retailer may also receive certain auditable data for accounting purposes.

Ask any filmmaker and they’ll tell you movies aren’t just meant to be watched — they’re meant to be experienced. Movie theaters are equipped with massive, floor to ceiling speaker systems, but it’s becoming easier and easier to replicate a lot of that experience at home.

Until recently, home theater systems required a lot of space, but unlike TVs (which keep getting bigger), audio gear has become a lot more compact. Companies have found new ways to deliver premium sound from speakers and subwoofers that can easily be moved and positioned around the room, to create an enveloping, surround sound experience.

This guide focuses on “all-in-one” 5.1 surround sound systems that contain multiple speakers and a stereo receiver in one package. Yes, you can still build your own home theater system from scratch by picking the speakers and stereo receiver on your own, but these pre-built systems have some advantages. First, it’s easier to get an entire system in one shot. But more importantly, the companies who make these home theater systems have done the heavy lifting of making sure each component works harmoniously with one another.

Our home theater system recommendations deliver a ton of power, but have a fairly small footprint. Each of them will be a night-and-day difference over your TV’s built-in speakers, and take you a lot closer to the experience you have sitting in a movie theater or being at a live concert.

What Are the Best Home Theater Systems?

There are many factors to consider when choosing the best home theater system for you; below are the most important ones, which we considered while we were researching this list.

Wired Or Wireless: One of the latest home theater innovations is the rise of wireless speaker systems. Each speaker needs to be connected to an outlet for power, but you don’t need to run a cable between them. Wireless systems give you a lot more speaker placement options, but may suffer from latency (lag), which can result in audio and video being very slightly out of sync.

Inputs: To get the best experience, you’re going to want to connect components (a TV, Blu-ray player, game console, media streamer, or turntable) directly into your home theater’s stereo receiver. We’ve chosen home theater systems with receivers that have a lot of inputs (HDMI, Component, RCA, Optical in) or robust wireless capabilities.

Bluetooth Support: Until recently you had to connect all of your stereo components directly to a receiver in order to play music or watch movies. That’s still true for video, but we’ve included home theater systems with Bluetooth support, which allows you to stream music through them wirelessly.

Smart Features: Home theater systems haven’t evolved as quickly as standalone Bluetooth speakers, but we’ve included a smart options in our guide in case you want to do more than just listen to music.

If you’re getting your first home theater system, and don’t know where to start, Onkyo’s HT-S3900 is the right choice.

The system has five speakers, a subwoofer, and a stereo receiver. This is a wired system, which means each speaker (including the subwoofer) needs to be directly attached to the receiver with a wire.

This system’s receiver has four HDMI puts, three sets of RCA inputs, and an optical audio input. This is more than enough to connect your essential home theater accessories and TV at the same time.

Although its speakers need to be wired, this home theater system does support Bluetooth, so you can stream music to it wirelessly. It doesn’t have any other smart or high-tech features, but that’s ok because it handles the basics so well.

If you don’t mind having to string speaker wire around your home theater, or the lack of smart features, Onkyo’s home theater system has all the features really need.

Enclave Audio may not be a name you’re familiar with, but the company has been making audiophile-grade home theater gear for a few years.

The company’s latest offering is the CineHome II, a totally wireless six-speaker surround sound system. Each speaker connects to the CineHub, a stereo receiver with a single HDMI and optical audio, and AUX input. The Cinhehub gets audio from your TV via its HDMI ARC (audio return channel) port or optical audio port, and sends it out to the speakers.

The bottom line is that you’ll connect all of your components to your TV, and the CineHub will handle the rest. Having a totally wireless home theater system is great if you have a limited amount of space, or don’t like the idea of having speaker wire running across your floor.

Enclave’s CineHome II supports the Dolby DTS and recently-announced Dolby Audio surround sound standards, which means you’ll get a really premium audio experience. I do need to point out that the movies and music you stream need to be mixed well for you to have the best results. If your source material is flawed, this system cannot save it.

Instead of bundling in a remote, Enclave Audio lets you control the system through an app on your device (iOS or Android). This app can be used to control basic system functions like volume, or access more advanced settings like system calibration.

The only feature this system lacks is any sort of smart-home compatibility. If that doesn’t bother you, and you really care about the way your music and movies sound, this is the right system.

Sonos has made its mark on the audio industry by forcing it to get more technically advanced, and its new home theater system is no different.

The system has four speakers: a sound bar, two Sonos One speakers, and a subwoofer. All of these speakers are wireless, but the Beam has an HDMI input (and HDMI to optical audio adapter), which is how your TV gets connected to it. The system supports Dolby Digital, one of the most commonly used surround sound formats, which maximizes its compatibility.

I’ve tried the Sonos Beam and Sonos One speakers for myself, and both sound very good. The Beam was my only home theater component for almost a year, and I never felt the need to upgrade until I got a larger space. All of these speakers offer well-balanced audio that doesn’t distort during busy parts of songs, or at high volumes.

Speaking of the Beam specifically, Sonos did a solid job replicating the experience of a right, left, and center channel speaker into a sound bar. Dialogue in the movies and TV shows I watched was always clear and audible, even during scenes with background music, which can sometimes drown out people talking. It did feel like there were three discrete speakers spread far enough apart to create wide stereo sound.

The main reason to get this system over the other ones we recommend is that it’s extremely smart. It supports Bluetooth, AirPlay 2 (an Apple-developed technology that lets you stream audio and video wirelessly), Amazon’s Alexa, and the Google Assistant.

If you set it up to work with Alexa or the Google Assistant, you’ll be able to control the system using your voice. Everything from basic system functions (volume adjustment), playback controls (play/pause/next track/previous track), will be accessible by voice command. You can also ask the system to play music from popular streaming services like Amazon Music or Spotify, and control smart-home accessories like light bulbs. It’s a stealthy way to make your home theater smarter without having to get dedicated hardware.

If you’ve been curious about what Sonos has to offer, and want to dive in head first, the company’s surround sound bundle is a premium way to sample its best offerings. You won’t have to deal with messy cables, remotes, or apps, either. 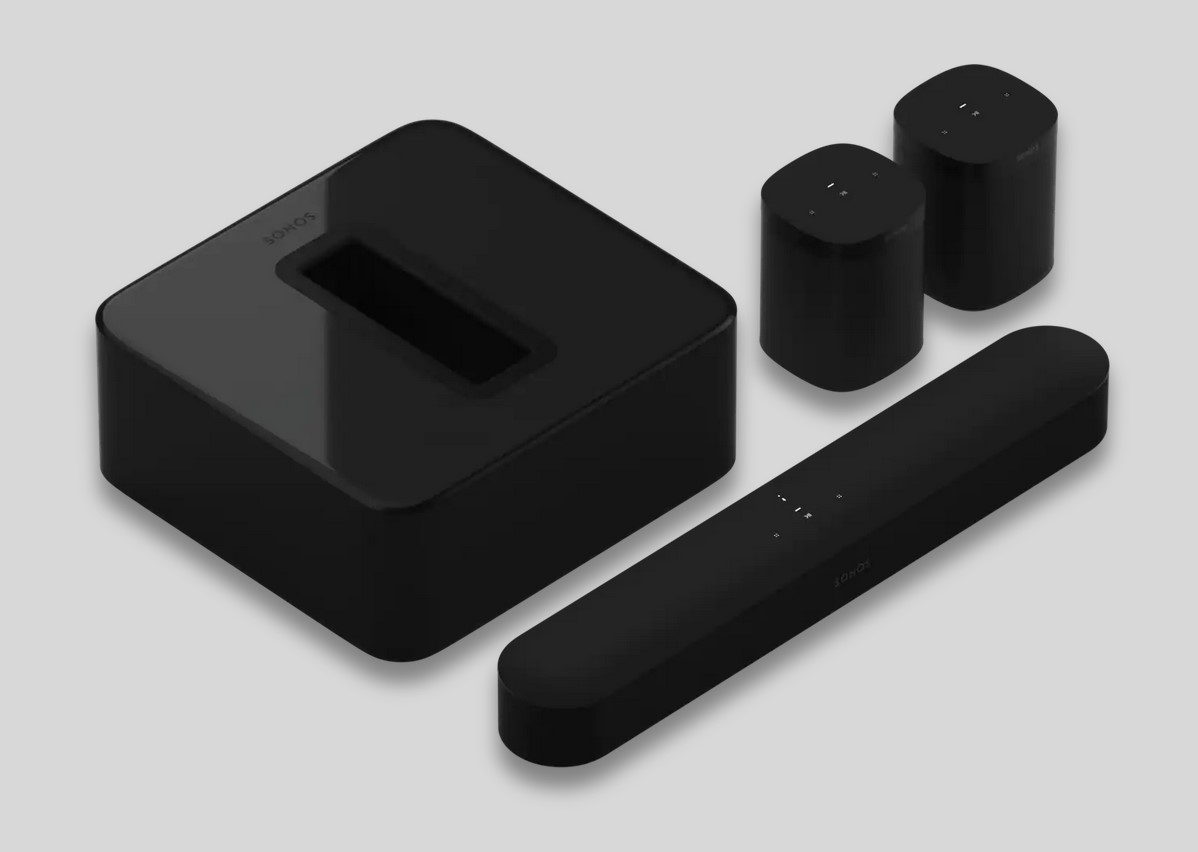