Heidi Klum needed to blow off steam after a long day at work promoting ‘Germany’s Next Top Model.’ She donned gold roller skates and whirled around her green room and set.

After Heidi Klum‘s long catwalk career in high heels, you’d think she’d have excellent balance skills. The 47-year-old proved she’s still got it — sort of — with a freewheeling trip around the Germany’s Next Top Model set in a pair of gold roller skates. Heidi claimed she’d been doing “Interviews all day” for GNTM in a Dec. 1 Instagram video she shared with fans. The blonde stunner then needed to blow off some energy in the skating video she posted.

Heidi could be seen with her long locks perfectly blown out and with a camera-ready makeup job. She was wearing a comfy olive green sweater dress and a large gold link statement necklace. The America’s Got Talent judge appeared to have worn bright yellow Crocs style shoes on her feet to stay comfy during interviews. But she exchanged them for bright gold roller skates once her promo work was done.

Heidi hoisted herself off a chair in what appeared to be the studio’s green room, excitedly squealing “Yippee!” She took a spin past the kitchen and back around while trying not to fall on her skates. She then made a turn into the GNTM studio, but was met with her first big obstacle. “Oh shoot! No one told me about the ramp!” Heidi cried out, as she tried to remain upright while skating down it. 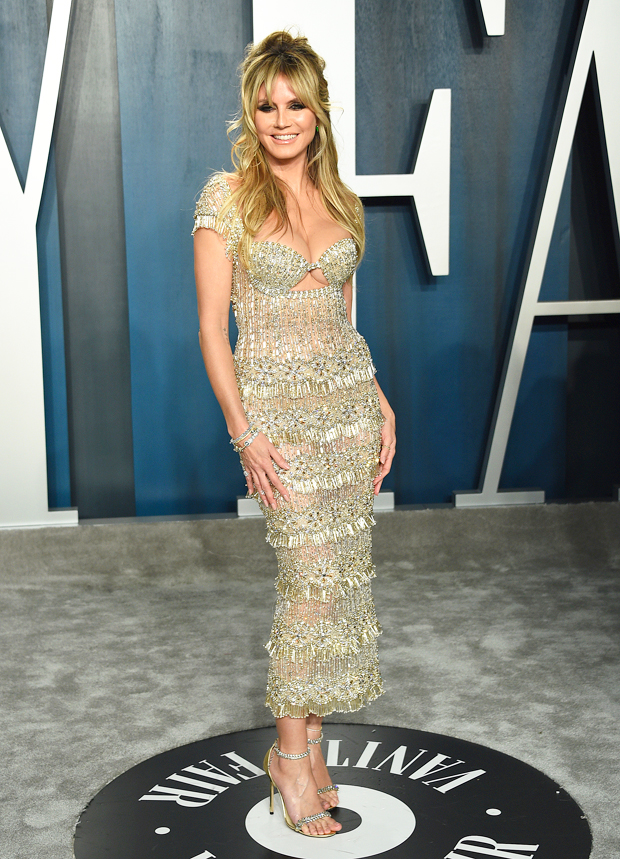 Fortunately a stage hand helped catch her and slow down her movement. Then it was on to her next challenge. “Hi! I don’t know if I can go up anywhere!” Heidi exclaimed as she approached the stage, which was several inches off the studio floor. She managed to handle the move like a pro, but then flailed her arms about her sides to maintain balance, claiming “can’t stop!” Fortunately a chair in the middle of the set allowed Heidi to turn and land in a seated position without taking any falls during her workplace skating journey.

The roller skating whirl wasn’t the only fun Heidi had during her long day of interviews. In a separate IG video while wearing the same outfit, hair and makeup and in the same room, Heidi held onto a “Sexy Xmas” advent calendar featuring shirtless hunks in Santa hats on the cover. “I got to open the first door of my advent calendar,” Heidi told the camera in a sing-song voice. She took a bite out of the first piece of candy and pointed a joke towards her husband Tokio Hotel guitarist Tom Kaulitz. “Sorry my love, had to get this one cause Tokio Hotel’s was already sold out,” before noting, “But it’s just chocolate!” Being Dec. 1, she’s now got 24 more days of advent candy — and shirtless hunks — to go!