Living her best life! While Goldie Hawn soaked up the sun on her vacation in Greece, she decided to recreate the title song from Mamma Mia, resulting in one of the purest things on the Internet.

Goldie Hawn and Kurt Russell’s Love Story: A Look at Their Romance Over the Years

In the video, the 75-year-old Overboard actress frolicked along the beach and in the ocean, dancing to ABBA’s “Mamma Mia” track with a big grin on her face.

Hawn splashes in the water and dances on the sand while wearing a black one-piece swimsuit with flowers, a rainbow-colored cover-up and a sun visor to shield her eyes from strong rays. 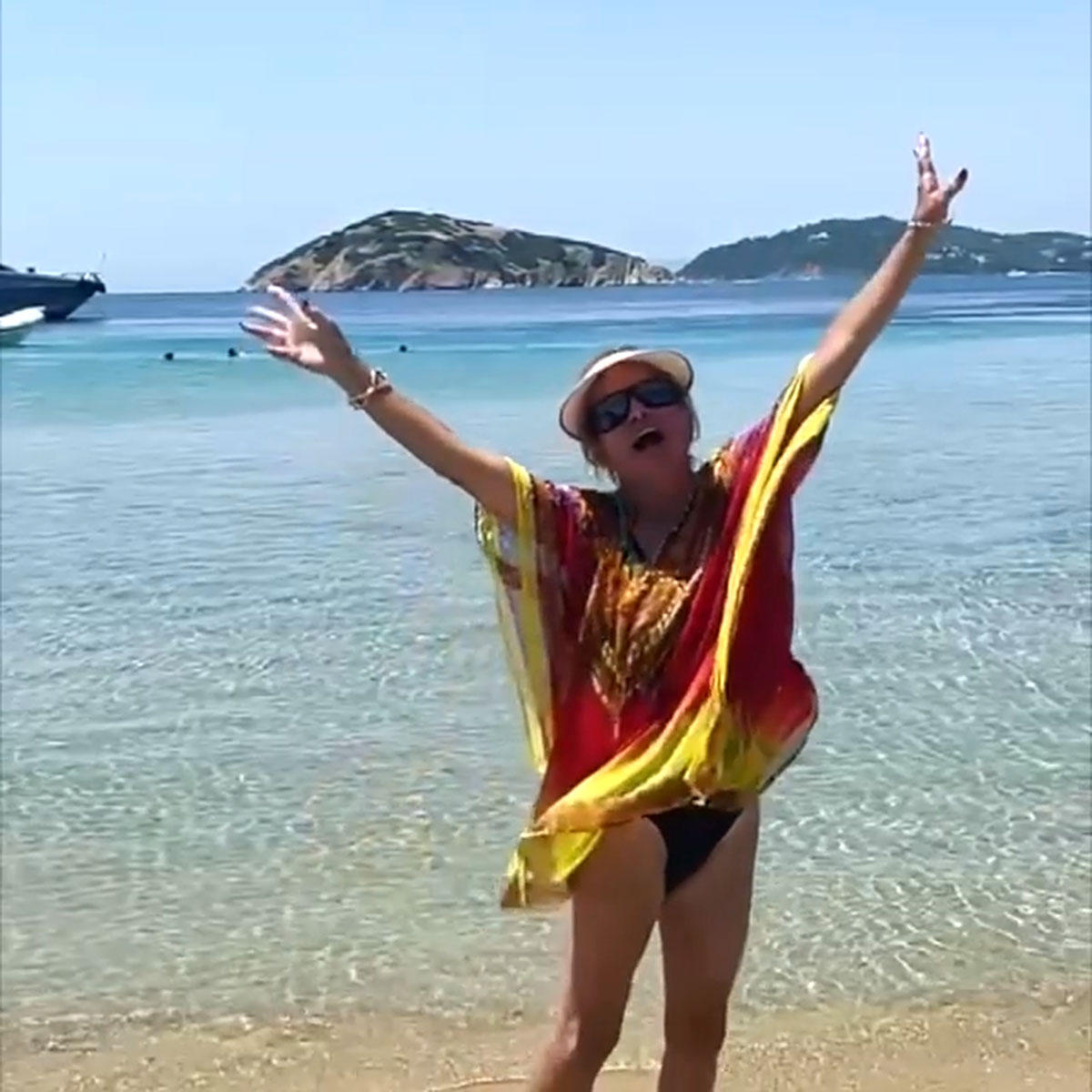 The upbeat video, which has already been viewed more than 1 million times, even counts some famous faces as big fans of her new rendition of the ABBA hit.

Sharon Stone called the Christmas Chronicles star “gorgeous” in the comments, while Chelsea Handler proclaimed she loved “Mama G,” and Andy Cohen even wrote that he “needed this today.”

Hawn’s daughter, Kate Hudson, joined her dancing mama on the Grecian vacation alongside her children Rani Rose, 2, and Bingham, 9, and partner Danny Fujikawa, as seen in various snaps via her Instagram.

This is hardly the first enviable vacation that Hawn’s taken. In May 2016, the actress went on a trip to Oahu, Hawaii with her daughter, 42, and Snatched costar Amy Schumer.

The Fabletics founder shared pics from their trip at the time on Instagram. She captioned a video of the three ladies on the water, “Amazing day with the girls! @officialgoldiehawn @amyschumer #BringOnTheSummer #Aloha #DolphinLove #Guru #CoastModern.” 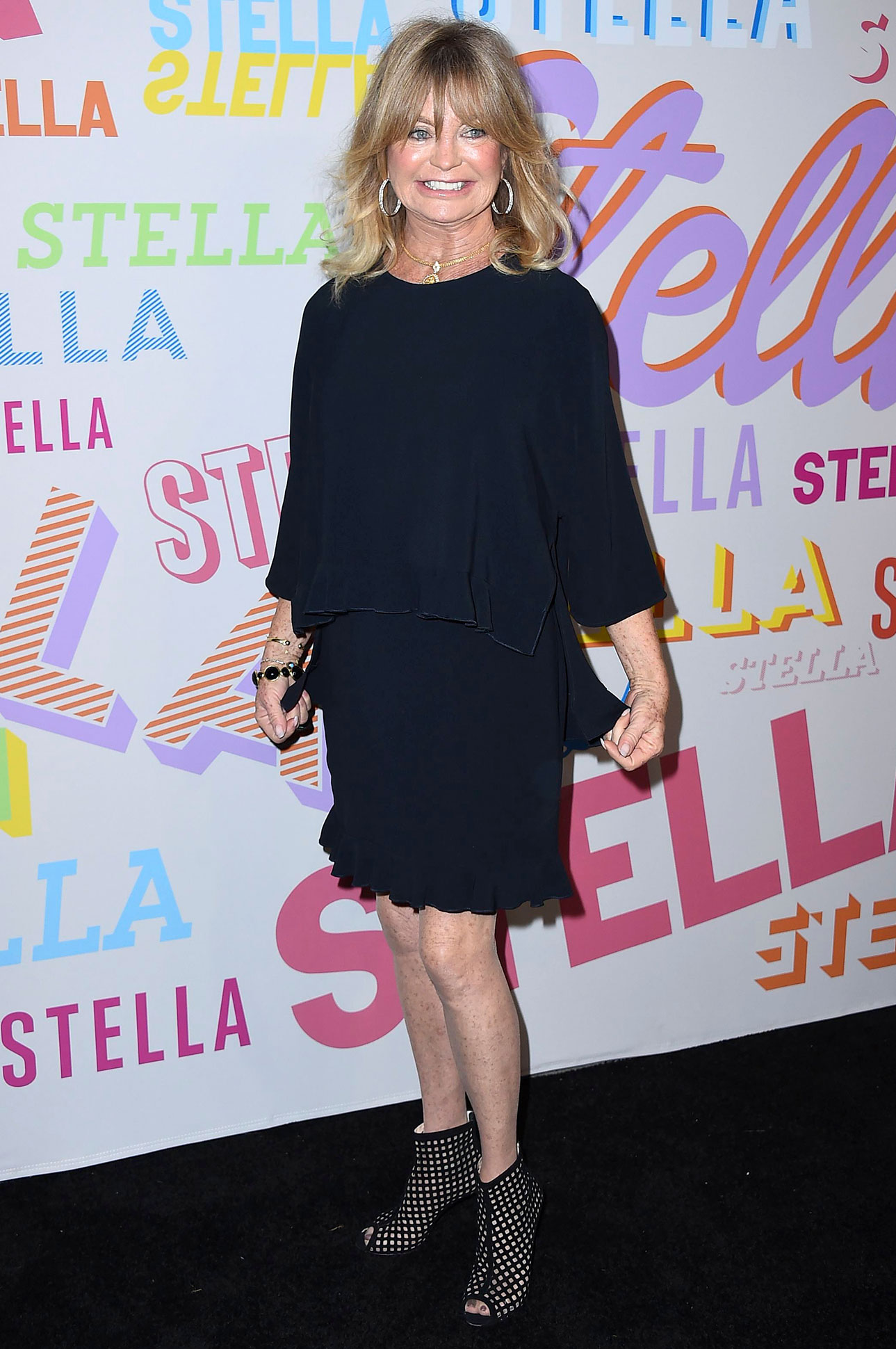 The Oscar winner is also the mother of actors Oliver Hudson and Wyatt Russell.

“We’re a very tight family,” the 44-year-old Rules of Engagement alum told Us Weekly in April. “We all live very close to each other. … They’re amazing people, amazing grandparents, amazing parents.”

The proud grandmother has been with her partner, actor Kurt Russell, since 1983 when they worked together on Swing Shift.

“A lasting relationship isn’t about marriage. It’s about compatibility and communication. And you both need to want it to work,” Hawn previously told Porter in 2015 about sustaining her lasting relationship with her Christmas Chronicles 2 costar. “If one person does not want it to work, it isn’t going to work. Intention is the key. It’s also about not losing yourself in each other. Being together, two pillars holding up the house and the roof, and being different, not having to agree on everything, learning how to deal with not agreeing. Everything’s a choice.”

Listen to Us Weekly’s Hot Hollywood as each week the editors of Us break down the hottest entertainment news stories!