Fox News' Ed Henry out of hospital, 'beyond grateful' for support after giving sister part of his liver 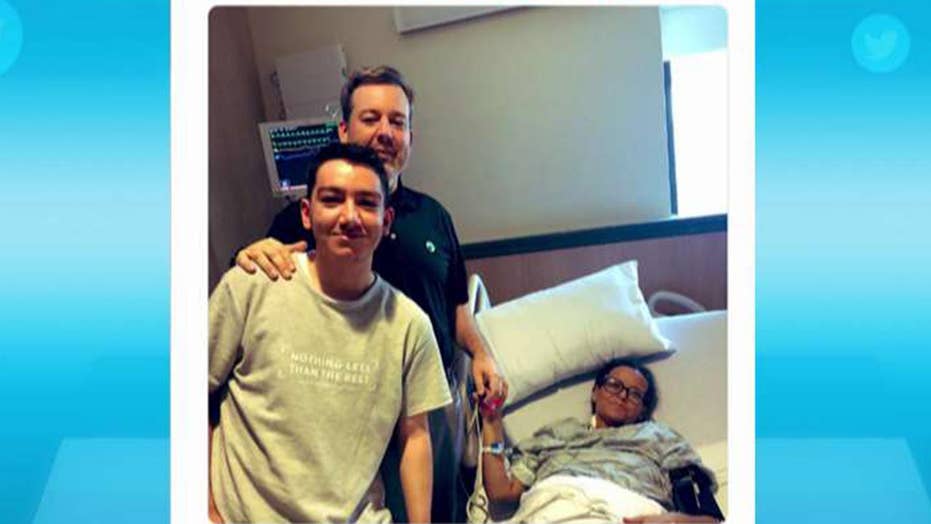 Fox News Chief National Correspondent Ed Henry is now recovering after donating part of his liver to his sister.

Henry, who became emotional on-air days before the surgery, shared her positive prognosis on Twitter and said she's recovering at a good pace.

He'd told "Fox & Friends" his only goal was to "give her a little life."

Henry posed for a photo at the hospital alongside Colleen and her son Frank, whose shirt read, "nothing less than the best."

He also tweeted a moving photo of a card from his colleague and fellow Fox News personality Martha MacCallum, which came with flowers and a promise of "prayers."

"I am so gratified that both Colleen and I continue to make progress every day. And I am beyond elated to have gotten out of the hospital already with all of my vitals in the right place, and a functioning liver of my own. This has been a remarkable seven days, starting when I nervously opened up about all of this on 'Fox and Friends,'" Henry told Fox News. "To think one week ago we were unsure about Colleen’s future, and anxious about two surgeries, yet tonight she has the greatest gift of all — life.

"We have had talented surgeons, doctors, nurses, and support staff. Plus loving parents and family and friends by our sides at every key moment. But opening up about it to a broader audience brought a dimension we could not have anticipated — the love, prayers, and well wishes of thousands upon thousands of wonderful people we have never met. We are blessed and beyond grateful."

Henry also told Fox News the surgery was an immediate success and that he and his sister will be resting and recovering for the next several weeks.

“We have always known the road to full recovery will be longer for Colleen. But her surgeon says as soon as he put part of my liver in her it started working immediately — a miracle," he continued. "She still has family and friends by her side every step of the way. And now she has a prayer army that nobody can beat. Our thanks and love always for your continued support.”

ED HENRY CALLS IN TO GIVE UPDATE ON LIVER TRANSPLANT RECOVERY: 'WE'VE SUCCEEDED IN VICTORY'

“For now the only marching order I have gotten from our CEO Suzanne Scott is to rest up for awhile. I will listen even though I will be champing at the bit to get back to work. All I know is I will be ready and eager to get back as the doctors and Suzanne give me the green light because I miss our audience and my Fox colleagues, who have brought my family to tears with their outpouring," he concluded.

Both Henry and Colleen are expected to regain 100 percent of their livers in about 6-8 weeks, according to transplant specialist Dr. Joe Galati.

"Yes indeed over 6 to 8 weeks, the liver will regenerate for Ed, regenerating back the 30 or 40 percent that he donated. Similarly, his sister who received a portion will get back to 100 percent in a similar time frame," Galati told Fox News in an email.

"Keep in mind that the liver is the only such organ that can regenerate like this, which is an amazing feature more people need to know about," he added.

A GoFundMe page has been taking donations for Colleen Henry's recovery.