For Spain, Investment Pays Off at the World Cup

VALENCIENNES, France — It was a momentary lapse in a scoreless game, a ball left dangerously free on the lip of the Spanish goal line after a superb parry during group play at the Women’s World Cup. That split second of hesitancy became decisive, though, as a German player slid onto the goalkeeper’s deflection and produced the goal that gave her team a 1-0 victory.

“It’s very frustrating,” Spain’s goalkeeper, Sandra Paños, said through an interpreter. “We are better than Germany.”

It was not fatal to Spain’s hopes. Sandwiching that defeat between a win over South Africa and a tie against China, Spain has advanced to the second round of the World Cup, where it will play the United States on Monday in Reims. That it is set to face one of the tournament’s giants is fitting, since perhaps no country in this year’s World Cup has awakened more dramatically to women’s soccer than Spain. 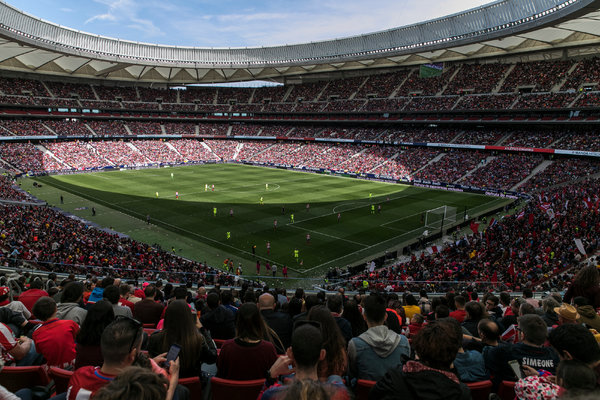 That growth was evident in March, when 60,739 spectators watched Atlético Madrid Femenino host Paños and Barcelona Femení — the largest crowd ever to watch women’s soccer in Spain, and the biggest ever to attend a women’s club match anywhere.

And it was evident again when Spain, playing in only its second Women’s World Cup, felt both annoyed and encouraged by a slim loss to Germany, a two-time champion and one of the favorites to lift the trophy this summer.

“Everything has changed in Spain,” Paños said of the attention being paid to women’s soccer there, adding, “We feel we can play with any team in the world.”

To reach the second round of the World Cup and to play a club match before more than 60,000 people would have been unimaginable even a few years ago in a culture in which sexism and machismo are intensely rooted, and in which women’s soccer was long dismissed or, worse, simply ignored.

“Women have sometimes learned to say, ‘Thanks for letting us play,’” said Susanna Soler, a professor of the history and sociology of sport at the National Institute of Physical Education and Sport of Catalonia. “But it is perfectly normal to ask for more.”

For Spain, a passionate soccer nation that won the men’s World Cup in 2010, the delivery of women’s soccer from afterthought to acceptance resulted from many factors. A protest by Spanish players at the 2015 Women’s World Cup in Canada brought public shame over the disdainful treatment of the team by its longtime coach, who scorned the players as “chavalitas,” or immature girls. The coach has been replaced, and so has ossified leadership inside the Spanish soccer federation. And La Liga, the men’s professional league, has lent its skills in communications and organization — not to mention the credibility of powerful global brands like Barcelona and Atlético — to women’s soccer.

In 2018, Spanish women’s teams won the under-17 and under-19 European championships and finished second in the under-20 World Cup. News media attention has increased. Corporate sponsors have begun to show interest in women’s soccer, which helps them to be associated with a social cause and to receive hefty tax benefits. And there has been a broad societal insistence on gender equity by Spanish women, who have taken to the streets in recent years to demand change.

“The rise of women in all fields is important for Spanish society to cross barriers and evolve,” said Jorge Vilda, 37, who was hired to coach Spain’s women after their disastrous 2015 World Cup. Vilda also serves as director of women’s soccer for the national federation.

Speaking through an interpreter in March in Barcelona, Vilda said the example being set in Spain was “a way to show that a sport in Europe that is very masculinized can also be practiced at the top level by women, who can fill stadiums and draw very good audiences on TV.”

Problems persist, however. Technically, Spanish law still does not allow for a women’s professional league in the country. And some athletes in various sports continue to have contracts voided after becoming pregnant.

But there have been many changes, some small and symbolic. Names have been placed on the backs of jerseys in the Spanish league’s top division to make players more easily identifiable. Members of the national team have had their per diem doubled, to about $135 a day, and Spain’s soccer federation last week announced that it would invest 20 million euros ($22.8 million) directly in women’s soccer next season.

Corporate investment also has increased. Iberdrola, an electric utility giant, pays a reported $3.3 million to $5.5 million annually to sponsor the top level of the women’s league. The communications company Mediapro has extended its contract for the league’s broadcast rights through 2022 for $10 million.

Stanley Black & Decker, an American tool company, is paying nearly $4 million a year to place its name on the Barcelona Femení jerseys. This made the club first women’s team in Spain to turn a profit, and to pay salaries from $90,000 to more than $150,000 for some top stars, club officials and players said. This season, the team became the first from Spain to reach the women’s Champions League final.

Players in Spain’s domestic league also now receive payment for their image rights. All of the referees in the first division are women. A dozen women’s matches were played this season at the vast stadiums occupied by men’s teams. More than 100 were shown on television; next season, that will be the case for all of them.

According to officials and players, attempts are being made to introduce a minimum league salary of about $17,000 to $22,500 and to cover some costs related to pregnancy.

“Conditions are not set in the league that allow women to be confident that when they do have a contract, they have all the labor rights that go with it,” said Maria Teixidor, the director of women’s football at Barcelona. “We need to improve that. It’s important players can be sure they will be treated as they deserve when they become pregnant.”

Since 2017, Vilda said, the number of registered female players in Spain has risen to 60,000 from 42,000. The aim is for soccer to overtake basketball as the most popular sport for women.

Women began playing soccer in Spain in the 1930s, said Soler, the Catalan professor, but participation nearly ended under the Franco dictatorship, which lasted from 1936 to 1975. The Roman Catholic Church was skeptical, Soler said, and others were simply dismissive. When a precursor to Barcelona Femení played its inaugural match on Christmas Day in 1970, according to one player quoted in The Irish Times last year, a public address announcer kept asking, “Has her bra broken?” as players ran about the field.

Players on that unofficial Barcelona squad said they were sometimes called lesbians, told to go home and do the dishes, or warned that playing soccer would leave them unable to have children.

Lolita Ortiz, 74, a captain of that team, said a journalist once asked if she feared spectators would come just to look at her legs. Her surrealistic reply would have made Dalí proud: “When you go to the beach,” she said, “what do you look at? Giraffes?”

When Barcelona and Atlético Madrid drew the record crowd to Atlético’s stadium, the site of the men’s Champions League final this year, Ortiz said she cried.

“We planted a little seed that has grown,” she said.

Corrosive stereotypes about women persist in Spain, though, and while women’s soccer is in dizzying transition, it is not fully stabilized. Only Barcelona, Atlético and one or two other clubs among 16 in the top division are fully professional. Just two teams have female head coaches. Real Madrid, one of the world’s richest and most closely followed clubs, does not field a women’s team, although reports Saturday suggested that would change in time for next season.

And although there have been attention-grabbing crowds elsewhere in Europe this season — including an audience of 48,121 when Athletic Bilbao hosted Atlético Madrid and a crowd of more than 39,000 for a Juventus-Fiorentina match in Italy — attendance at many women’s games still numbers in the hundreds.

Even a club as powerful and progressive as Barcelona has an average home attendance of only about 1,000, even though tickets are free. On a number of teams in Spain’s top flight, players hold other jobs because their clubs pay little more than $300 a month, barely enough for gas money, said Vicky Losada, Barcelona’s captain and a midfielder on the Spanish national team.

“They are paying out of their pockets to play football,” Losada said. She said she worried the financial gap between the top and bottom teams in the Spanish league would eventually widen the competitive gap. “I don’t think it’s good,” she said. “We are working to make that change.”

According to current players, Vilda has brought a more professional, disciplined approach to the national team. But he also has enhanced preparation; increased the size of his staff; and installed the familiar Barcelona style of possession and cleverness on the ball.

“I think we can do something great at the World Cup,” defender Celia Jiménez Delgado said before the tournament. “You always perform better when someone is on the same side and has the same goals as you.”

In Spain, it is widely believed that this World Cup will be a seminal moment for soccer, and women’s sports in general. In February, the Spanish government presented a draft of a bill that would mandate gender equality in sports. Pedro Sánchez, the country’s prime minister, said at the time that “being a woman and an athlete cannot continue to be a question of heroism.”

So heady is the moment with possibility that Ernesto Valverde, the coach of Barcelona’s men’s team, suggested on International Women’s Day in March that his famed team could one day be coached by a woman.

“Women are going to keep having more and more of a presence in the game,” Valverde told reporters. “That’s unstoppable.”

Jeré Longman is a sports reporter and a best-selling author. He covers a variety of international sports, primarily Olympic ones. He has worked at The Philadelphia Inquirer, The Dallas Times Herald and The Clarion-Ledger in Jackson, Miss.