Quinta Brunson’s career is beyond impressive. I mean, the Emmy-nominated actor began as one of the youngest video content creators at BuzzFeed Motion Pictures (aka the video-production arm of the media company responsible for billions of monthly views…casual!) before going on to create and star in the mega-hit Emmy-nominated sitcom Abbott Elementary.

And although she’s been proudly vocal about the show’s *massive* success, she’s def a little (read: a lot) more hush-hush about her own private life, including her marriage to Kevin Jay Anik. How-ev-er! Lucky for you, we practically have a master’s degree in snooping, so we’ve got you covered…to the best of our abilities, LOL. I mean we did say she’s notoriously private! That said, here’s what we do know about her adorable husband Kevin:

Quinta’s husband is a sales manager

Now, I’m not saying that I could never do this job, but the fact that I still double-check simple algebra with my handy-dandy calculator app all but confirms it’s kind of tough, okay? ¯\_(ツ)_/¯

News of their engagement was announced on IG

On July 30, 2020, Quinta announced her engagement with a stunning, fresh-faced selfie, complete with a close-up of her dazzling 💍💍💍. In the caption, she simply wrote, “More good news”—a reference to her previous announcement that A Black Lady Sketch Show just also happened to score an Emmy nomination.

Oh, and their wedding was the lowest of keys

According to Showbiz Corner, Kevin and Quinta tied the knot in a v intimate ceremony with close friends and family in September 2021, a little over a year after their engagement. Yes, it was probably amazing. No, there are no public pics, sadly.

Don’t even try to look for him on social media

A true 1 of 1 kinda man, it doesn’t seem that Kevin has any form of social media. Plus (!!), he’s never appeared on Quinta’s Instagram feed. Like we said…hush-hush.

However, they *have* been spotted out and about together

…Like once. But! It was a red carpet appearance at this year’s Time 100 Gala, which is absolutely worth approximately 37 regular sightings: 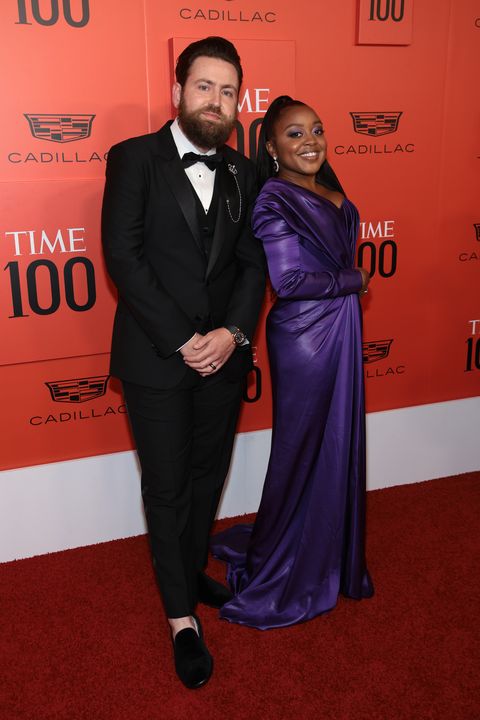 Aaaaaand that’s all we know for now! BRB, gonna start manifesting bumping into the couple—stat.