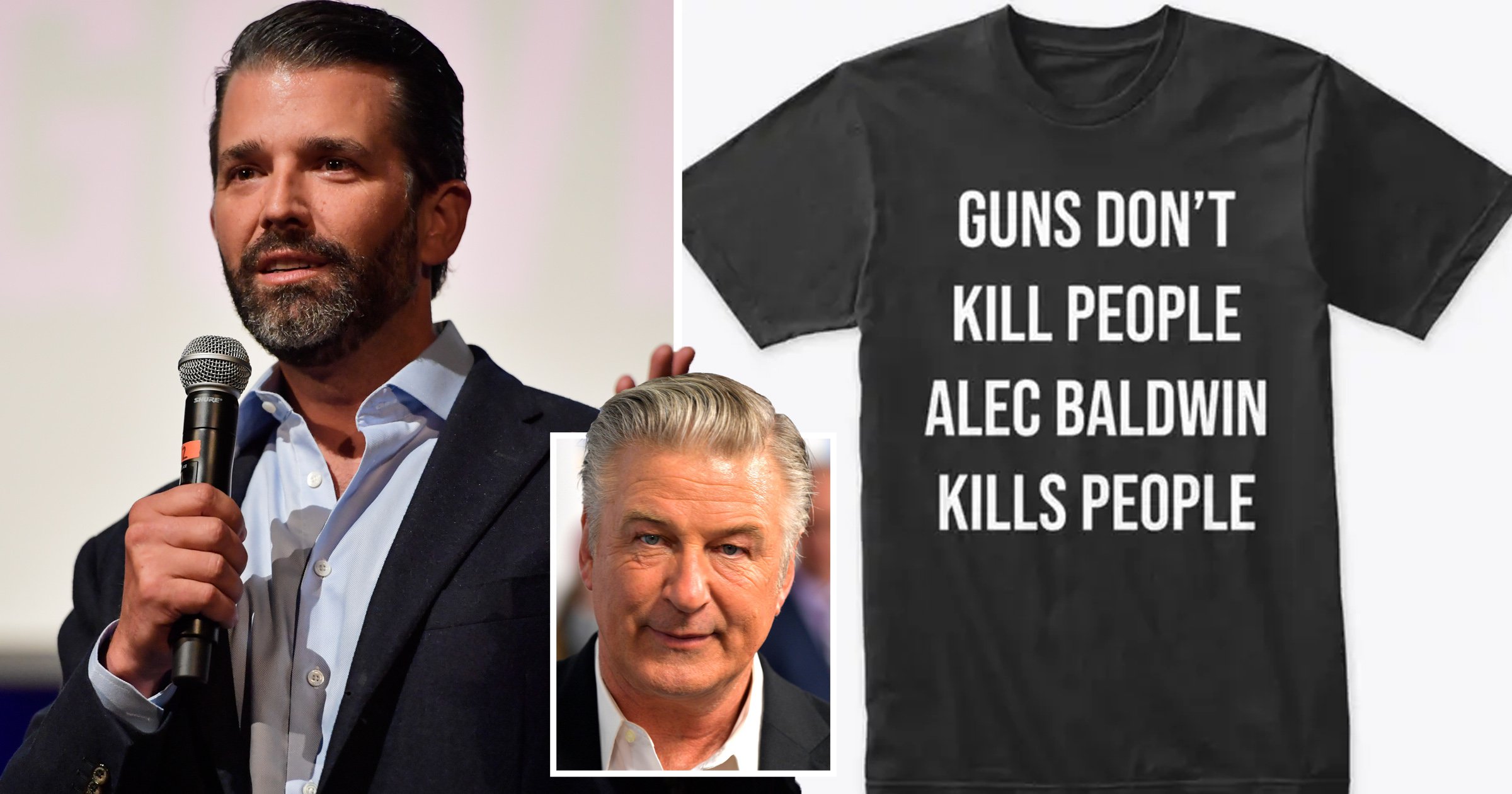 In another instalment of ‘things that make you weep’, Donald Trump Jr has hocked ‘tacky’ T-shirts mocking the death of Halyna Hutchins after she was killed by a prop gun fired by Alec Baldwin last week.

Investigations are ongoing after Baldwin, 63, accidentally shot and killed the director of cinematography, 42, during a rehearsal last Thursday on the set of Rust in Santa Fe.

Baldwin was interviewed following the incident and no charges have been made.

Clearly no fan of Baldwin – who long impersonated his pa Donald Trump on Saturday Night Live – but a big fan of making a quick buck, Trump Jr has posted many memes to his Instagram mocking the horrific incident.

Evidently believing cashing in on a tragedy is the next logical step, the former TV presenter reportedly promoted T-shirts on his Instagram which co-opted a popular phrase by the pro-gun lobby which read: ‘Guns don’t kill people, Alec Baldwin kills people.’

Baldwin has long been an advocate for tighter controls around firearms and this has seemingly hit a nerve with Junior who has long shouted about his pro-gun stance.

Seeing as this pro-gun advocate is trying to make money off the back of the death of someone and sharing a meme that said ‘let’s all watch Alec Baldwin blame the gun’, here are some stats around gun deaths and injuries in the US.

According to data from the Gun Violence Archive, via The Washington Post, 2020 was the deadliest year for gun violence in decades, with nearly 20,000 Americans killed by guns.

Shooting deaths last year outpaced the next-highest recent year, 2017, by more than 3,600. The United States also saw the highest one-year increase in homicides since it began keeping records. According to the data, gunshot injuries rose to nearly 40,000 – adding another 8,000 to 2017’s record-breaking total.

The Archive states 16,914 deaths have occurred from guns so far (not including suicides).

So perhaps it comes as little surprise the Trump son has been dragged for the shirts, as disgusted punters shared their thoughts on social media, with Daily Beast editor Molly Jong-Fast hailing it ‘tacky even for him’.

Fred Guttenberg, whose child Jaime was killed in the Parkland shooting, wrote: ‘Someone died in this accident. She was a mother, wife, and daughter. I know how her family feels. The only thing I want to say to that scum of the earth @DonaldJTrumpJr is you clearly are your fathers son. Never has there been a more miserable family.’

‘Though I believe this is an understatement – sewer rats have more class and dignity than @DonaldJTrumpJr,’ one fumed, sharing an image of the shirt.

‘Donald Trump Jr. must be really hard up for cash to be selling T shirts off his website.😂😂😂😂😂,’ Renee Libby joked. ‘Did Daddy stiff him on his allowance?’

And of course many, many people brought up the number of people killed by Covid while his father was in power as a morbid comparison.