If you’re sitting there wondering if Cody Simpson and Miley Cyrus are official… well, it’s definitely looking that way. Since they were caught kissing in a Friday, Oct. 4 video, Miley Cyrus has kind of confirmed that they’re an item via her Instagram Stories. But the real confirmation seems to be coming from a different source. On Saturday, Oct. 5, Cody Simpson’s Instagram with Miley Cyrus featured a very couple-y photo that is def going to make everyone admit that these two are the cutest couple.

What’s going on, exactly? Well, first the two were spotted at a grocery store together on Thursday, Oct. 3 in LA. E! News broke the story, mentioning that an eyewitness exclusively told the publication the scoop. Reportedly, "they saw them coming in to the grocer… to grab a drink and some sushi" and there was a "quick kiss" as they were looking at food together.

However, that little tidbit wasn’t solid proof of anything between the two singers. But then, TMZ caught a video of Miley Cyrus and Cody Simpson making out over breakfast at Backyard Bowls in West Hollywood. Now that basically started a whole slew of responses from fans, seeing as Cyrus so recently broke up with Liam Hemsworth and then Kaitlynn Carter. The attention was enough to spark Cyrus making a personal statement on Twitter.

In her Twitter statement, she referred to the public’s investment in her past relationship with Liam Hemsworth since they "saw it thru from the beginning," but continued, "I think that’s why people have always felt entitled over my life and how I live it, because they’ve watched me grow up." She ended up making sure that the public knew that it’s her life and she’s going to date how she pleases, which means everyone better get used to it.

Phew! I mean, most of us support her defense, I’m sure. Or at least, it’s relatable to think that you wouldn’t want everyone who isn’t an active part of your life judging every little thing you do. And you probably will support even more when you see how adorable Cyrus and Simpson are together. I mean, Cody Simpson’s latest Instagram with Miley Cyrus shows he’s probably very serious about her.

Simpson’s Instagram Stories are a slew of mostly solo pics and vids of him swimming — apparently he’s part of USC’s Trojan Swim Elite Team — until you get to one of his most recent posts in the thread. 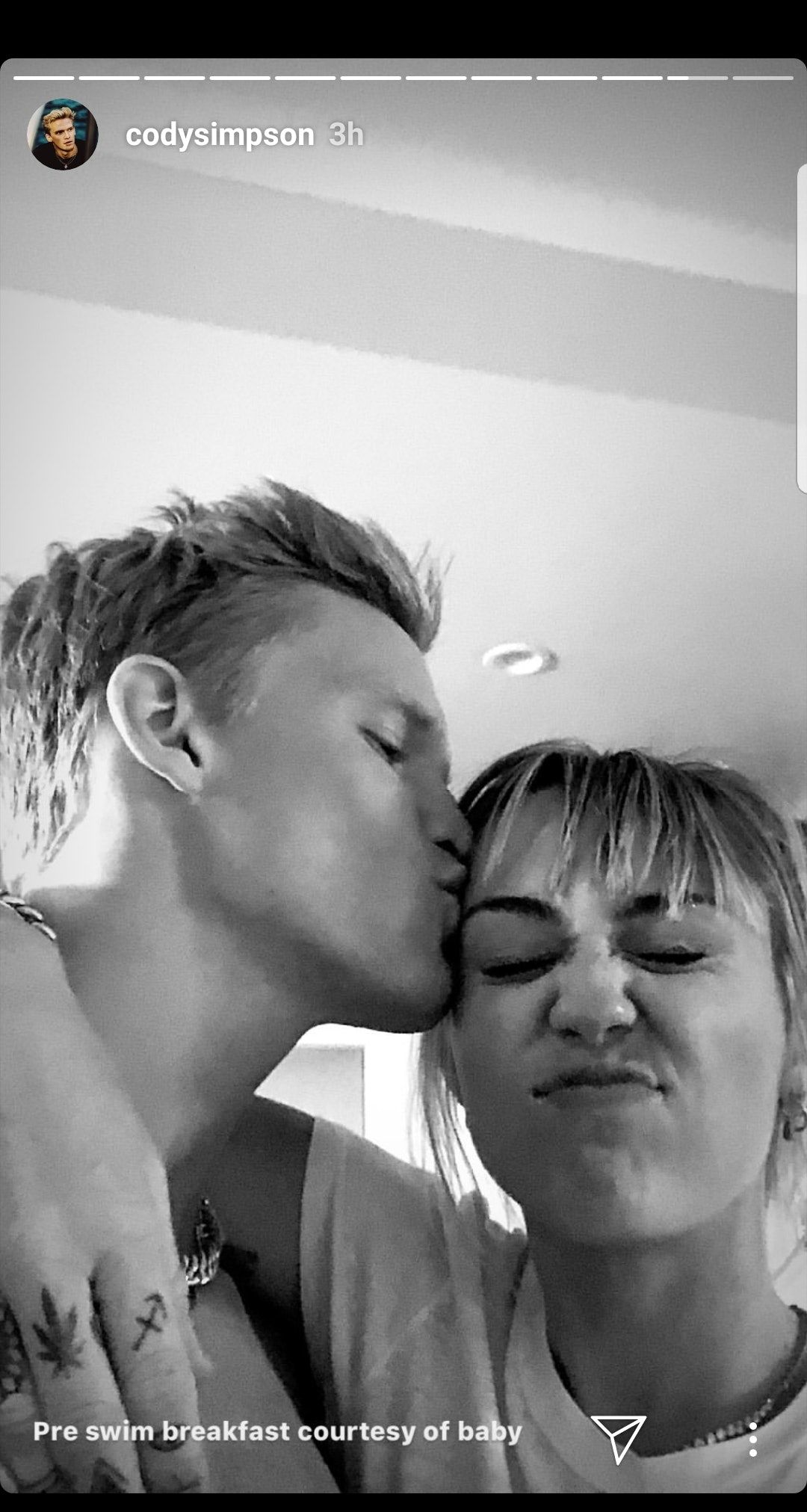 So, for real, Miley already made him breakfast. And Simpson is already calling her "baby." Obvi, this may be moving a bit fast, but then again, the two have actually been friends for years.

Before Simpson posted this romance confirmation on his Instagram Stories, Cyrus actually responded to the media on her own, in her Instagram Stories. So, TBH, it was already that these two were potentially an item like the media suggested. In fact, Miley Cyrus’ Instagram posts about Cody Simpson made it pretty hard to ignore the fact that she’s totally crushing on him. It probably helps that his abs are almost always on display.

If you didn’t catch her Stories thread, she made a reference to the fact that Cody Simpson is "her type" and had posted a shirtless pic of him, even commenting on his abs. And then, she claimed that she’s def living her best #HotGirlFall.

Although Miley’s posts were tongue-in-cheek confirmations of a relationship between the two, Cody Simpson’s ‘Gram posts win out for being a total, romantic giveaway. Of course, it’s unclear if these two are going to be a permanent item or if they’re just experiencing a bit of fall cuffing season woes. Whatever it is, it sure feels like Cody Simpson’s post is confirming that they’re a couple in the making — and a super cute one at that!