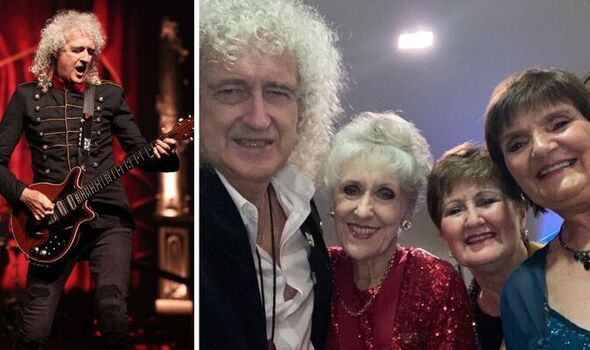 Brian May recently returned from a break in France’s wine capital, Bordeaux, which he said was timed to help him escape from the “humiliating” state of British politics – and he soon went back out on the town with Anita, where he met up with two of the Nolan sisters.

Brian May, 75, and his beloved wife Anita Dobson, 73, who inspired him to write one of Queen’s biggest hits, ‘I Want It All’, were out on the town together on Sunday, and were clearly in the mood to socialise.

The pair, who have been married for the past 22 years, posed with Denise and Anne Nolan, who are 70 and 71 respectively.

Anita didn’t let advancing age compromise her passion for getting glammed up, as she donned a bright red sequin blazer and matching top for the meet-up, along with a bold smoky eyeshadow look.

Anne wore a more muted sequin outfit in green, which she matched with an emerald coloured necklace, while her sister craned her neck to fit into the photo just behind her.

Meanwhile, the Nolans also posed with Helen Worth (Gail Platt in Coronation Street) as she showed off her sense of style in a Chanel-style pink boucle wool blazer – and Anne posted it all to her 4,250 fans on Twitter.

Denise Nolan isn’t usually one to flaunt her celebrity status

Denise Nolan revealed that brutal taunts she received as a teenager eroded her self-confidence and that she once felt like “the ugliest thing in the world” compared to her sister, Maureen. Today she is still regarded as the most reclusive of the Nolans, but on Sunday night she donned her sparkly sequins and made an effort to mingle.

Helen Worth, who plays unlucky-in-love Gail Platt on Coronation Street, channelled Chanel-style chic in her boucle blazer while she stood happily between the two sisters.

The Nolan Sisters in their heyday

Pictured from left to right are Maureen, Anne and Bernadette (at the back) and at the front, Linda and Denise. Not pictured in this photo is the sixth sister – Loose Women star Coleen.

In spite of Denise’s struggles with her self-confidence, she has gone on to enjoy a professional singing career, with a top 20 album – and her sisters recently publicly praised her.

Meanwhile, Brian May has been urged to pursue a passion in politics

Some of Brian May’s 3.1 million followers have urged him to apply for the prime ministerial role himself, after his impassioned rants suggesting that no one in the Tory Party currently is suitable. However, it is Rishi Sunak who is to become the nation’s new PM.