Aubrey Plaza Cracks a Grin at the Batting Cage

“I’ll give it a whirl,” Aubrey Plaza said, edging closer to the plate. “See what happens.”

On a pollen-heavy afternoon, Ms. Plaza, a star of “Legion,” the psychedelic drama that began its final season on June 24, had taken a car to the Upper West Side of Manhattan, then descended into the basement of the Central Savings Bank building to find the Baseball Center, 15,000 square feet of fluorescent-lit batting cages and fake turf.

Ms. Plaza, 35, began playing fast-pitch softball at 7. As a preteen catcher, she took her community softball team, the Orange Crush, in Midway, Del., to the nationals. Was she a team player? “You’d have to ask my team,” she said, poker faced. 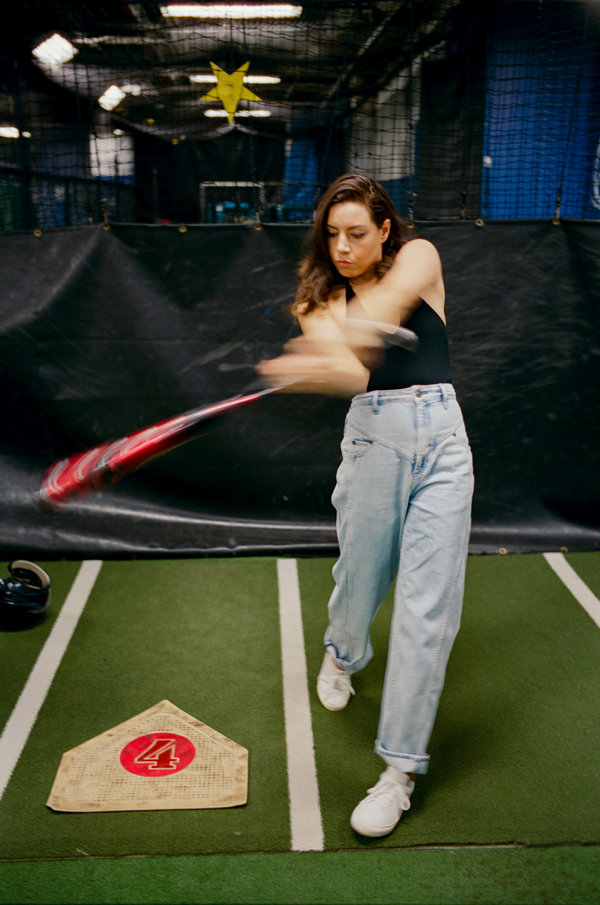 After graduating from New York University, with a bachelor’s degree in film and television production, she talked her way into a spot onto the Actor’s Equity team of the Broadway Show League. “They always needed girls,” she said.

And later, once she had moved to Los Angeles to star as April Ludgate, the terminally unimpressed intern on “Parks and Recreation,” she joined Chris Pratt and Nick Offerman on that show’s team, playing against other sitcoms. “Modern Family” beat them handily, she said: “They were really good.”

But Ms. Plaza, who has eased off team sports since tearing her ACL in a basketball game, hadn’t had an at-bat in a while. When she arrived at the Baseball Center, Jason Stock, the managing director, tried to start her off gently in the center’s green room, away from the pitching machines.

Ms. Plaza demurred. “You were going to toss balls to me?” she said. “No thanks.” (She said it a bit more colorfully; most of Ms. Plaza’s conversation includes an offhand obscenity or two.)

So Mr. Stock escorted her into the blue room, Cage 4, and outfitted her with a red-and-black aluminum bat. She clowned with an oversize orange helmet, then chose a snug black one.

“I should probably take my earrings off, huh?” she said, removing her hoops.

“For safety reasons,” said Melissa Bank, her friend from Los Angeles, who had flown in to cheer Ms. Plaza on.

Mr. Stock asked her if she wanted to warm up, maybe hit a couple off the tee first.

“No,” she said, thumping her bat against the turf.

One of the center’s coaches, Mike Belmont, who everyone refers to as Jellybean, flicked a switch and the machine juddered alive. Its metal arm scooped up a grubby rubber ball (it looked like a dimpled egg yolk) and flung it out at 48 miles per hour. It thunked against the backstop.

Shooting “Legion,” an X-Men-connected drama that is arguably one of the most visually stunning and mentally baffling shows on television, Ms. Plaza sometimes found herself “riddled with self-doubt and anxiety,” she said. She plays, Lenny, a former psychiatric inmate, who is now probably mostly human and probably mostly alive.

“I have to read the scripts five times before I can even understand what’s happening,” she said.

But fast-pitch softball? That she gets. Ms. Plaza watched a few more balls go by and then assumed her stance: knees bent, elbows flared, hips cheated to the right, lips pressed together in something like a frown.

The ball came at her and she connected with it effortlessly, the bat ringing as the ball soared back. She smacked away the second, returning it as a tidy fly, and with the third, she connected again, a scorching line drive toward what would have been second base.

So much for giving it a whirl. “I’m, like, already sweaty,” she said.

“I have coaches who don’t make this much contact,” Mr. Stock said.

The balls kept coming, some higher, some lower. One landed outside the strike zone; she glowered as it passed her.

Most balls she met with the barrel of her bat, sending them back toward the machine with a noisy, satisfying plink.

Was she having a good time? Tough to tell. Onscreen, Ms. Plaza wields a withering deadpan and a side-eye that leaves marks. Offscreen, too. The only time she smiled was when Mr. Stock told her that she looked angry. “I am angry,” she said, finally grinning. Still, she didn’t seem to want to stop.

Ten minutes in, Mr. Stock paused the machine and adjusted her form slightly, recommending that she stay back a bit, that she keep her weight between her legs, that she engage her right scapula to keep her left arm from flying out. She hit the balls even harder.

After 50 or so balls had come at her — she missed just four — she took a water break. As she drank, Mr. Stock told her that a Baseball Center client had just been drafted by the Yankees.

“You think I can get drafted by the Yankees?” she said.

Excellent, she said. “I have a really good arm, too.”

Ms. Plaza urged her friend Ms. Bank, wearing a maxi dress she would soon hike up, to take a turn in the cage. Ms. Bank asked for some pointers. “Don’t get hit,” Ms. Plaza said, sprawling on a bench.

Ms. Bank missed the first few, then she began to connect. Ms. Plaza cheered her on: “You look hot, girl. Yeah, yeah! Little grounder there.”

After about five minutes, Ms. Bank had exhausted herself. (She’d been gripping the bat so hard, her nails had cut into her palms, drawing blood.) Ms. Plaza decided to take one last turn. She left her helmet on the bench this time and again squared off against the machine, hands clenched around the bat, mouth settled into an it’ll-freeze-that-way scowl.

“It’s just so fun,” she said impassively, as another ball hurtled toward her. She batted it away. “And it never ends.”