Ariana Grande performed at the 2021 iHeart Music Awards with The Weeknd last night, which would be exciting news even in regular times, but is even more !!!! due to the fact that this was her first public appearance since getting married to Dalton Gomez. Not to mention the first time she took her new wedding ring for a spin!

While this might look like a relatively simple diamond and platinum band, it’s actually super special because Dalton himself designed it— with the help of Solow & Co.

“They worked with Dalton on this,” a spokesperson for Solow & Co told E! News. “It’s a beautiful, tasteful platinum and diamond pave band. Dalton was very happy with it.” 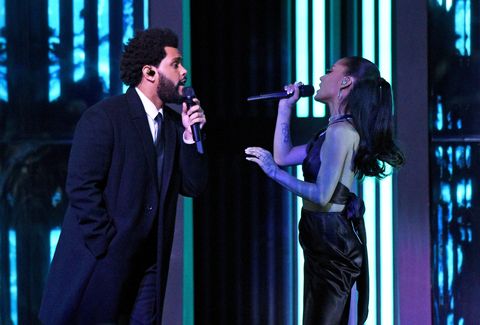 Lemme go ahead and zoom in on that: 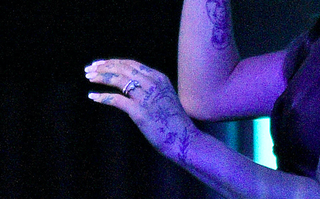 The band complements Ari’s stunning diamond and pearl engagement ring, which Dalton also helped design. “Dalton was involved in every step of the selection process through FaceTime and Zoom since he was on the west coast and I was here in my office in New York,” designer Jack Solow said after the couple went public with their engagement. “He was very, very specific about what he wanted. He had very strong feelings about how he wanted this to look, a contemporary kind of way. It was his idea to do the diamond on an angle and he said to me we had to incorporate a pearl into the finished piece.”

Ari and Dalton got married at her Montecito home on May 15, with less than 20 people in attendance. Her representative confirmed the news to People, saying “The room was so happy and full of love. The couple and both families couldn’t be happier.”

You love all the deets on celeb news and relationships. So do we! Let’s overanalyze them together.