Ant McPartlin and Declan Donnelly are set to discover that one of them is related to royalty, as they explore their ancestry in a new documentary for ITV.

The presenting duo described embarking on the journey as ‘mind-blowing,’ though which of them has the royal connection is being kept a secret until the programme airs.

It comes after Ant, 43, confirmed he was finally returning to I’m A Celebrity as he and Dec, 44, posted a snap from the first production meeting, ahead of the new series which is expected to begin next month. 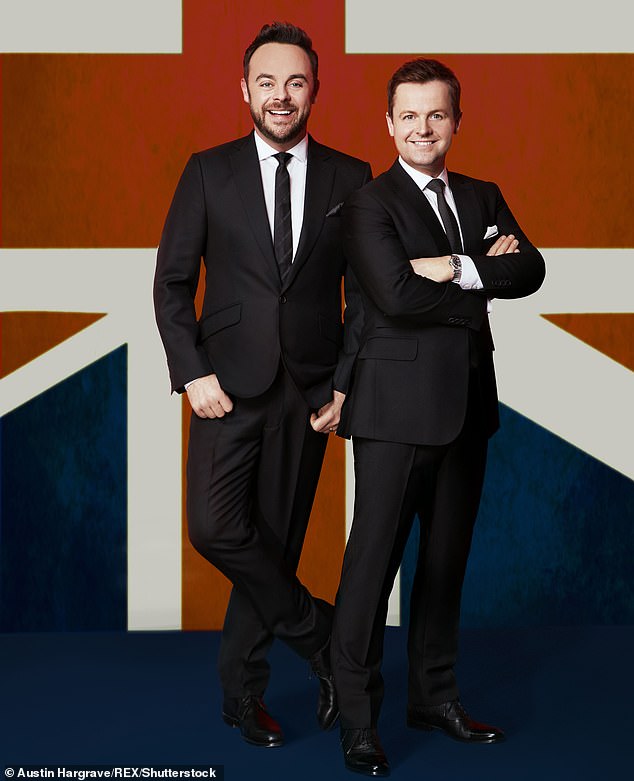 Exciting: Ant McPartlin and Declan Donnelly are set to discover that one of them is related to royalty in a new documentary (pictured filming in Philedelphia in May)

In the special, Ant and Dec follow their maternal and paternal blood lines using their DNA, in a bid to uncover secrets about their history, and appear to be following in the footsteps of Danny Dyer with news of their royal connection.

EastEnders star Danny learned that he was a direct descendant of the 14th Century monarch Edward III, during an episode of Who Do Think You Are? in 2017.

Ant and Dec’s journey takes them to Ireland and the US, including The United Nations Headquarters, and leads them to relatives they never even knew existed.

Speaking about the special Ant said: ‘I’m a bit of a geek when it comes to historical events, so to get the chance to research our family history using our DNA was too good an opportunity to pass up.

‘What we find out is mind-blowing and nothing either of us could ever have imagined. It’s something that will stay with us both forever.’ 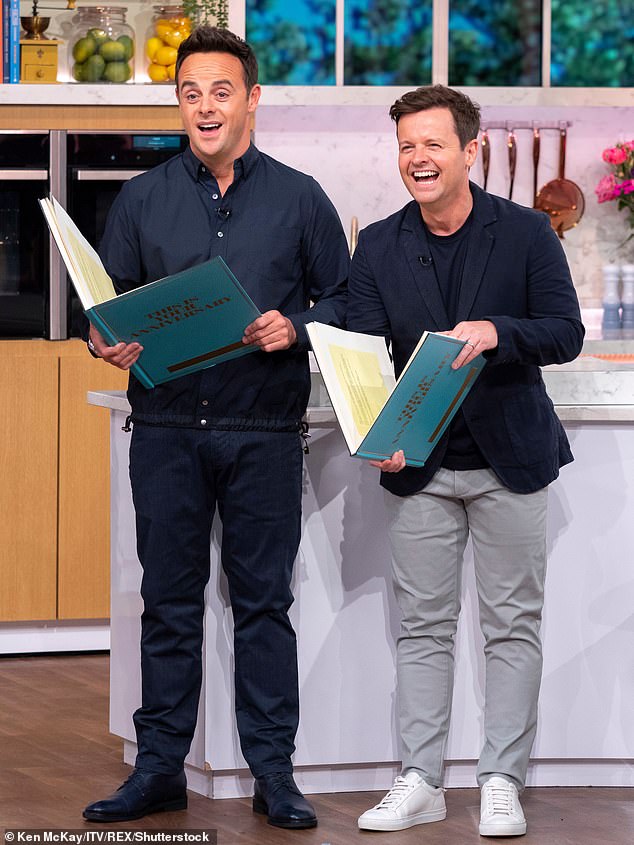 Amazing: The presenting duo described meeting unknown relatives across the world and learning about their royal roots as ‘overwhelming’ and ‘mind-blowing’

Dec added: ‘A huge part of this was to find out my heritage, especially on my dad’s side. I always thought I knew a fair bit about where I came from but it turns out I was wrong!

‘Whilst it was incredible to find out about the past, what was hugely overwhelming was to meet relatives neither of us knew we had. It was a truly amazing experience.’

An air date for the Ant & Dec’s DNA Journey is yet to be confirmed.

It comes after the duo confirmed on Thursday that Ant had finally returned to filming for I’m A Celebrity, as they took to Instagram to share a snap from the first production meeting of the series.

Captioning the snap, they wrote: ‘At @itv having meeting about &imacelebrity. Finding out what’s in store and this years celebs.’ 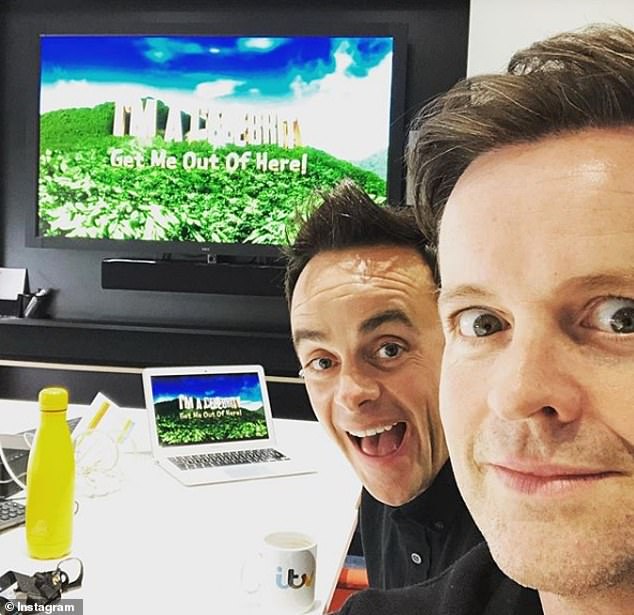 Welcome back: It comes after the duo confirmed on Thursday that Ant had finally returned to filming for I’m A Celebrity with a snap from the first production meeting of the series

Sitting alongside his presenting partner, Ant looked thrilled to be back on the show after missing its eighteenth series following his rehabilitation for prescription drug and alcohol issues.

And This Morning’s Holly Willoughby – who stood in for Ant during his absence – admitted she couldn’t wait to see him back in the jungle. Jungle fever: Ant will return to the show with Dec when it airs its nineteenth series in November Delighted: Holly Willoughby, who stood in for Ant last year, and Susanna Reid both commented after Ant and Dec shared a photo from an I’m A Celeb production meeting

The meeting marks another step back into the busy production schedule Ant retreated from in order to focus on his personal issues in 2018.

His presenting duties were originally suspended by ITV in March after he was arrested following a road collision with a green Mini and a maroon BMW.

Ant later pleaded guilty to driving under the influence at Wimbledon Crown Court. He was banned from driving for 20-months and fined a British record £86,000 for drink-driving. 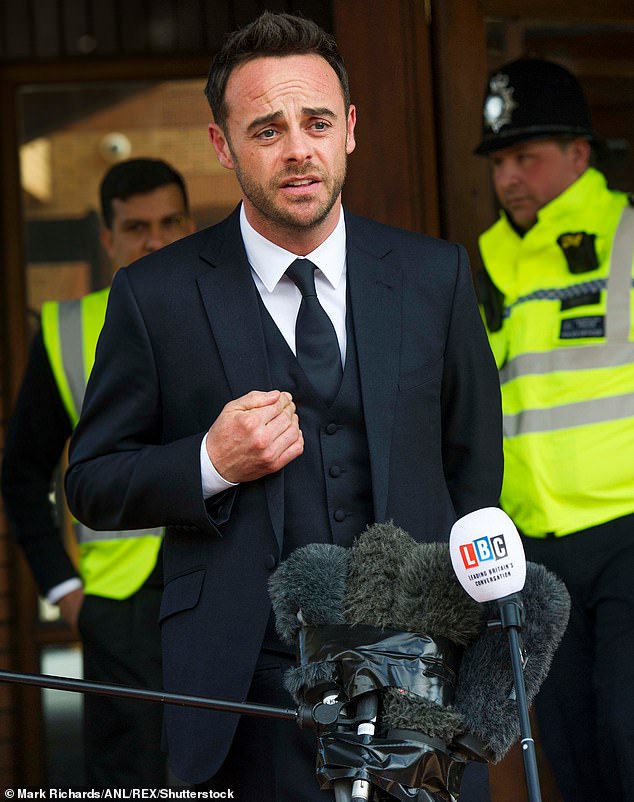 Controversy: Speaking in August, the presenter confirmed he was taking a temporary break from all presenting duties in order to focus on his recovery from prescription painkiller and alcohol dependency (pictured outside Wimbledon Magistrates Court)

Speaking in August, the presenter confirmed he was taking a temporary break from all presenting duties in order to focus on his recovery.

In a statement, he said: ‘My recovery is going very well and for that to continue having spoken to Dec and ITV, I have made the decision to take the rest of the year off.

‘I’d like to thank both Dec and ITV for their continued support and I look forward to getting back to work in the new year.’

He was later joined by Holly Willoughby for that year”s I’m A Celeb, with the This Morning star drafted in as a temporary replacement.

It had been reported that ITV bosses wanted Holly to host I’m A Celeb with both Ant and Dec next year after the show received its highest ever viewing figures, with a whopping 12.6 million tuning in to watch the star’s first week.

At the ITV show’s after-party in December 2018, Dec said of Holly: ‘There is nobody I would have preferred to stand next to.

‘We were thrilled with the ratings, they are absolutely great. Holly has been fantastic too, just brilliant. She was the one I wanted and I am thrilled she did it.’

In the midst of Ant’s absence, Dec also confessed he debated going solo. Trouble: His presenting duties were originally suspended by ITV in March after he was arrested following a road collision close to his London home 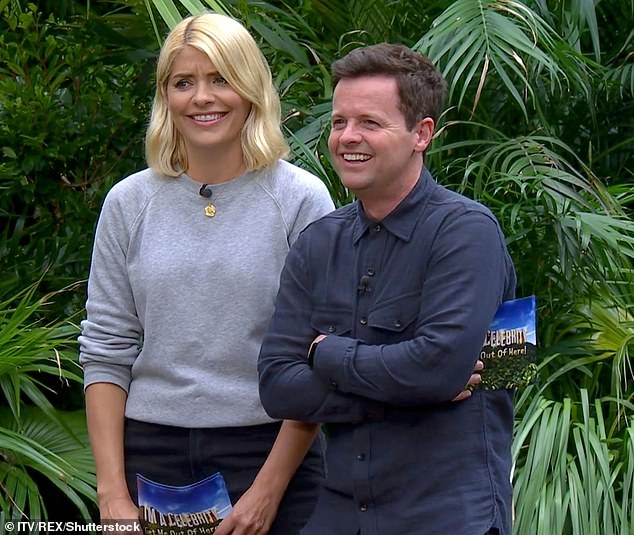 New presenter:  Declan Donnelly was joined by Holly Willoughby for that year”s I’m A Celeb, with the This Morning star drafted in as a temporary replacement

He said: ‘I’d be lying if I said the thought hadn’t crossed my mind. Of course I thought about it. Ant went away, and he had a lot of work to do on himself…

‘He had a lot of thinking to do. Equally, I did. I thought about every eventuality and every permutation…

‘Ultimately, the number one thing I wanted to happen was that Ant came back and he was healthy and happy, and we got our relationship back on track and we carried on. That’s the thing that makes me the happiest, working together’.

After five-months away Ant returned to work for the Britain’s Got Talent auditions in January.