Amanda Knox Reveals The Sad Truth About Her Life Today

Amanda Knox is opening up about her fertility journey with her husband, Christopher Robinson, on her podcast “Labyrinths.” Knox gained infamy as the American student who was convicted of murdering her roommate while studying abroad in Perugia, Italy in 2007. She was later exonerated after spending several months in prison and was allowed to return to the U.S. While Knox was absolved of the murder, she revealed in 2019 that it’s still hard to deal with. She explained, (via People), “I’m a real human being too and I’m trying to do the best I can with what life has given me.” She added, “Some days are really hard.”

Knox seemingly moved on with her life and married Robinson in February 2020. However, it appears she’s once again going through a difficult time after revealing on her podcast that she recently suffered a miscarriage. She explained that they “thought it was a straight line from unprotected sex to baby.” But Robinson added, “We were wrong. Painfully wrong.” While Knox dished that she “got pregnant very fast,” when they didn’t find a heartbeat at a subsequent ultrasound appointment, she said she “knew something was wrong.”

Knox continued to explain that when they went back a week later, there was still no heartbeat. She revealed, “That was confusing to me, because I thought, ‘Why would there be a dead baby just hanging out in there? If it wasn’t viable, why wasn’t it going away?’…I didn’t know that you could have a missed miscarriage.” 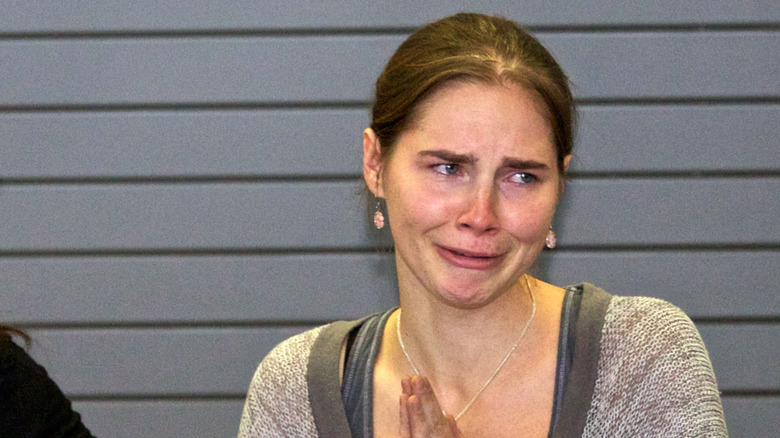 Amanda Knox says she’s “failing to be okay” these days after suffering a miscarriage. She explained on her podcast (via People), “I was pregnant with something that just was not growing.” After a procedure that she says was pain “like I’ve never experienced before,” she was left to deal with her emotions. She revealed, “I did feel incredibly disappointed that that was the story of my first-ever pregnancy… I knew exactly what I want to do … and to have it not come to fruition not through choice felt like a betrayal.”

Knox says she even wondered if her time on trial for murder had something to do with it. She said, “‘Did something happen to me while I was over in Italy?’ If it’s not easy and you don’t know why, then anything could be the problem.” Knox added that she had been thinking of the baby already as the name she planned to give her first child, but, “I very much immediately tried to divorce those two ideas in my head. That was not my baby.”

Knox could be heard crying when she admitted, “I don’t know who that baby was. I don’t know if I’ll ever know. It’s a weird thought.” She later added, “We sat with the miscarriage for a while, trying and failing to be okay.” Yet Knox did reveal that she has found comfort in a community of other women who had also experienced miscarriages.

If you or someone you know is having suicidal thoughts, please call the National Suicide Prevention Lifeline at 1-800-273-TALK (8255) or text HOME to the Crisis Text Line at 741741.