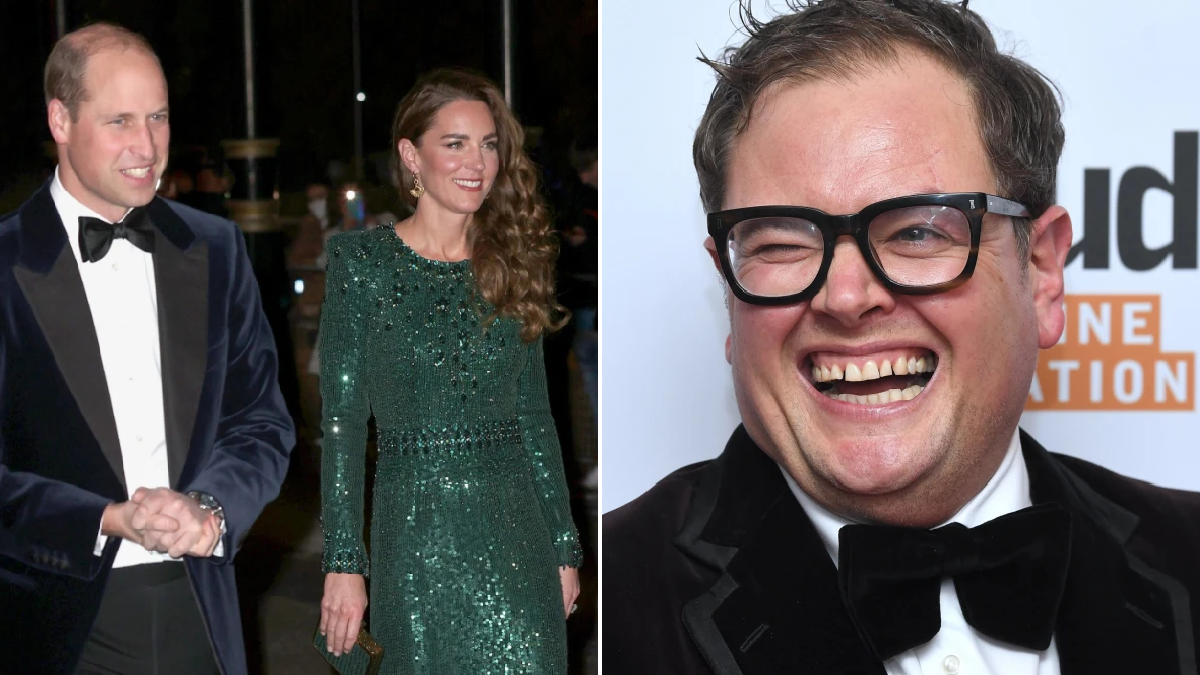 Alan Carr told Prince William, the Duke of Cambridge that he wasn’t ‘hitting on his wife’ after paying Kate Middleton a compliment at tonight’s Royal Variety Performance.

Greeting the royals at the 94th annual event, the comedian, who is openly gay, said to the duchess: ‘You look absolutely beautiful.’

Addressing the duke, the funnyman then added: ‘Sir, I am sure you do not know who I am but I am not hitting on your wife.’

At the Royal Albert Hall on Thursday, William and Kate were greeted by the Vice Lord-Lieutenant Colonel Jane Davis as they attended the recording of the special show.

Kate wore in a floor-length green Jenny Packham dress, while William sported a classic tuxedo at the annual charity.

Before the performance, a posy of flowers was presented to the duchess by 10-year-old Poppy Clee and the show programme was given to the duke by Rowan Clarke, also 10, who was asked what music he liked by William.

The duke and duchess will be entertained by a cast of famous faces at this year’s show at the Royal Albert Hall, including music from Years & Years, James Blunt, Elvis Costello, Gregory Porter and Anne-Marie.

The cast of the Royal Shakespeare Company’s production of Matilda The Musical, who are celebrating 10 years in the West End, were set to perform at the charity event, as will the cast of Moulin Rouge The Musical.

Cirque du Soleil will dazzle the audience with a performance from their latest show Luzia and there will be comedy from Judi Love, Bill Bailey, and Josh Widdicombe.

Former America’s Got Talent contestants The Messoudi Brothers, an acrobatic trio, will showcase their act, while The Greatest Showman star Keala Settle will perform with the film’s signature song This Is Me.

The event is staged in aid of the Royal Variety Charity and money raised from the show helps those people from the world of entertainment in need of care and assistance. The Queen is patron of the charity.

The Royal Variety Performance will be screened on ITV and ITV Hub in December.