A Touch of Weimar Cabaret in Times Square

Times Square may be the crossroads of the world, but in terms of night life it might as well be the Bermuda Triangle: a place where big dreams go to vanish. So leave it to Ian Schrager, the hotelier and former Studio 54 co-founder, to try to bring some nocturnal buzz back.

In March, he opened Paradise Club, a Weimar-ready cabaret spectacle at his latest hotel, the 452-room Times Square Edition. It features a two-hour floor show, “The Devouring” (courtesy of House of Yes), that is a high-concept reimagining of a William Blake poem and features half-clothed acrobats, ballerinas and an operatic cover of “Closer” by Nine Inch Nails. The overall effect is somewhere between Cirque du Soleil and a Super Bowl halftime show, reimagined by Twyla Tharp.

The club is on the seventh floor of the Tokyo-style hotel, where the elevator opens onto a darkened space the size of a large New York steakhouse. The décor feels very den-of-sin, with its Hieronymous Bosch-inspired murals and a gloriously hellish red electric supernova covering the ceiling. 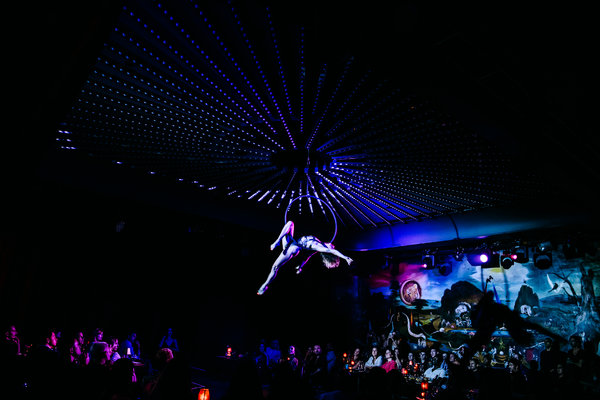 With a ticket price of $195 (dinner is included; drinks are not), the cabaret crowd is what you may expect: hedge-fund types rocking hockey-puck-size watches and designer wrap dresses; middle-aged tech bros in expensive-looking black T-shirts; executive-class tourist couples looking for a little New York sex and sizzle; and the occasional table full of club kids in black eye shadow, all grown up and apparently ready to brave Midtown. Diners on a relative budget can choose to sit at the bar for $95 (snacks included).

The show bubbles along with a globe-trotting blend of soul-tinged dance music and electronica (“Can’t Turn Around,” by the Foreign Exchange; “Yali Yali” by Nese Karabocek). After the two-hour extravaganza, the space becomes a nightclub, with big-name D.J.s including Q-Tip, Mark Ronson and Questlove spinning.

Tickets are available on Eventbrite and soon OpenTable, as well as by phone or email. Partygoers seeking to hit just the nightclub can expect a velvet-rope door policy and a $20 to $30 cover charge.

Patrons feeling flush can spring for a $670 bottle of 2006 Tattinger Comtes de Champagne or sample a $25 Manhattan (bourbon or tequila) from a drink trolley that circles the room. The 12-course menu includes caviar nachos and Yozu oysters on the half shell, courtesy of John Fraser, a Michelin-starred chef.