Reigniting his beef with the Chicago rapper, the ‘TROLLZ’ hitmaker claims ‘6ix9ine curse is real’ and launches a GoFundMe page raising money to ‘Help Reese [Buy] a Car.’

“Lil Tim out here wildin,” 6ix9ine wrote in the comment section of one post, referencing to Quando Rondo‘s associate who is charged with killing King Von. He added in another comment, “How [Reese] get shot before quando.”

Mocking Reese over a car which he allegedly stole, the Brooklyn native came with a message to Lil Durk, who is known as Reese’s frequent collaborator. “@lildurk buy ya man a car. U got him looking crazy in that video.”

6ix9ine posted on his Instagram Story, “He stole the wrong person car today.” He went as far as setting up a GoFundMe page to “Help Reese By (sic) a Car.” He wrote in the caption of his now-deleted Instagram post, “What happen today it’s not funny let’s all chip in and help him buy his own car.” The GoFundMe page has now been removed as well. 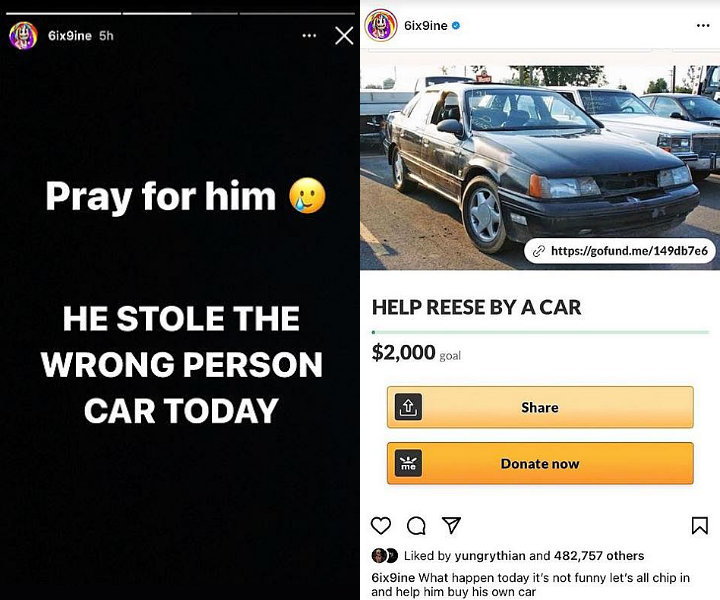 The Brooklyn rapper mocked his nemesis over an alleged stolen car.

His trolling didn’t stop there as he also bragged on his other Story post, “6ix9ine curse is real. Rest in peace to all the rappers who are in heaven.” He later posted a screenshot of an IG Live exchange he had with Reese earlier this year, where Reese appeared to flash a gun. “You mean to tell me you have it on Instagram but not in real life[?],” the 25-year-old questioned.

6ix9ine’s posts clowning Reese arrive after photos surfaced of a damaged car that was riddled with bullets and smeared with blood after Reese was involved in a shoot-out in his hometown of Chicago on Saturday morning, May 15. He and one of the other victims were taken to Northwestern Memorial Hospital in critical condition, while the third man was transported to Stroger Hospital in serious condition. Chicago Police Department officials claim the rapper sustained an eye wound after he was grazed in the eye by bullet.

The incident allegedly stemmed from a car jacking, but Reese reportedly told police that he wasn’t involved with that. According to TMZ, the rapper claimed he was only directing the men in the car when they pulled up to the garage.