John Lennon — who once revealed his least favorite song — parted ways with The Beatles in September 1969 after the group essentially became the most famous band the world had ever seen. Lennon’s transition to private life with his wife Yoko Ono, whom he met in November 1966, per Rolling Stone, was so abruptly opposite from the fame he […]

END_OF_DOCUMENT_TOKEN_TO_BE_REPLACED

The Story of ‘Silent Night,’ as Told and Sung by Kelly Clarkson, Josh Groban, Joss Stone and More, Set for CW Special

The CW’s “Silent Night — A Song for the World,” a musical documentary about the creation of the famed Christmas song, will feature Hugh Bonneville, Kelly Clarkson, David Foster, Katharine McPhee, Josh Groban, John Rhys-Davies, Joss Stone, Randy Jackson and Gavin Rossdale, among others. The film will premiere on the network Dec. 10, with an encore presentation Dec. 23. Narrated […]

END_OF_DOCUMENT_TOKEN_TO_BE_REPLACED

Dolly Parton, Julien Baker, Black Pumas Get in the Holiday Spirit With Spotify

Dolly Parton, Julien Baker, and Black Pumas are ringing in the holiday season by collaborating with Spotify. Parton joined Spotify’s For the Record podcast on their Christmas episode, where she discusses her new album A Holly Dolly Christmas and collaborating with Michael Bublé on the track “Cuddle Up, Cozy Down Christmas.” Baker and Black Pumas submitted holiday songs to the […]

END_OF_DOCUMENT_TOKEN_TO_BE_REPLACED

The ‘Positions’ singer has released an official music video for the second single off her latest album, featuring her as a scientist and a robot among other characters. AceShowbiz –Ariana Grande dabbles in science in a freshly-released music video for her new single “34+35”. The 27-year-old singer/actress plays a scientist, who tries to invent a robotic version of herself, among […]

END_OF_DOCUMENT_TOKEN_TO_BE_REPLACED

Disgraced ex-film producer Harvey Weinstein is reportedly "very ill", according to reports in the US. Medical staff believe the ex-Hollywood mogul contracted the deadly coronavirus while serving time in prison, according to reports. Harvey, 68, has been battling various illnesses since his incarceration back in March, often appearing at a New York courthouse with walking aids and a hunched back. […]

END_OF_DOCUMENT_TOKEN_TO_BE_REPLACED

Faith Schueler is a rising star in the pop/country music scene. She released her first single, “Who Holds Your Heart,” in 2018, and her first EP, “One Love Song at a Time,” came out earlier this year. On Nov. 16, Schueler returned with a brand new song called “March on Girl.” Showbiz Cheat Sheet recently caught up with the South […]

END_OF_DOCUMENT_TOKEN_TO_BE_REPLACED

Dolly Parton is an inspiration and a role model. She built her music career and wealth from scratch, and she also lives a life of kindness and generosity. One of her charitable endeavors is The Imagination Library, which gives books to young children while they are learning to read. Parton says she got the idea for this particular project from […]

END_OF_DOCUMENT_TOKEN_TO_BE_REPLACED 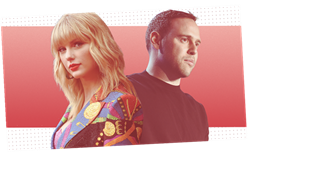 Taylor Swift vs. Scooter Braun: The Latest in Their Big Machine Feud

Taylor Swift and Scooter Braun’s feud is heating up again. The 30-year-old pop star and the 39-year-old music executive have been sparring over the rights to Swift’s music for over a year now and everybody from Justin Bieber to Selena Gomez has had something to say about it.  Keep reading for a complete timeline of the entire spat. Swift accuses Braun […]

END_OF_DOCUMENT_TOKEN_TO_BE_REPLACED

Gucci Mane is set to replace T.I. in an upcoming VERZUZ battle with Jeezy; the match will be VERZUZ’s Season Two opener. Gucci Mane took to Twitter to announce the news. “Tell buddy get ready,” wrote the Trap God. “@verzuzonline nov 19 TrapGod vs SnoCone.” The upcoming battle is a significant moment for the two artists because of their long-running […]

END_OF_DOCUMENT_TOKEN_TO_BE_REPLACED

A collaborative album from Ty Dolla $ign and Post Malone is on the way. The announcement was made by the Los Angeles-born artist during a video interview with Korean publication HIPHOPLE. Sitting down in what looks like his home studio, Ty Dolla $ign didn’t reveal any information about the collab project at all and only said, “Posty and Ty Dolla […]